A part of Silvretta … and a part of Stage R66

Today I set off with Monika, as we had made out yesterday. The walk will start from Ardez in the Engadin and will end in Scuol passing by the southern lower parts of the Silvretta, a massif on the Austrian-Swiss border (the regions of Vorarlberg, Tirol and Graubünden). In fact four stages of the Via Alpina pass through the Silvretta: R63 (Gargellen to Tübinger Hut), R64 (Tübinger Hut to Madlener Haus), R65 (Madlener Haus to Jamtal Hut) en R66 (Jamtal Hut to Scuol). Almost all these stages run through high alpine terrain. The alpine farm Alp Valmala is situated nearly halfway of today’s hike. This is the point where Stage R66 from the direction of the Jamtal Hut meets the other hikes and continues towards Scuol.

At 08.25 hrs I met Monika at the railway station Scuol-Tarasp to take the train to Ardez, the starting point of our hike. This hike is actually a combination of three trails: not only the Sennentour (the Shepherd Trail), in the historical setting of the “Silvretta Historica”, but also part of the “Via Engiadina” (a hike of several days through the Engadin from Vinadi in the Lower Engadin to Maloja in the Upper Engadin, or the other way round) combined with the Swiss Route of St. James, and as mentioned before over a short distance Stage R66 from the Jamtal Hut to Scuol. 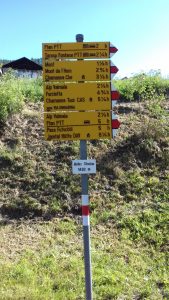 After a very steep climb in the first part of our trail to the Alp Valmala the view was overwhelming: the ruins of the Castle Steinsburg dating from the 14th century on the east side of Ardez in the already warm morning sun with the Engadin Alps as a beautiful coulisse. 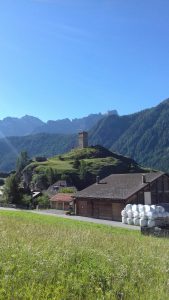 Ardez: View on the ruins of the Castle Steinsburg

At first we walked over grassy meadows, then through a forest of spruce and larch, later on over vast alpine meadows, in which over the years the melting snow rushing down from the mountain tops has cut deep trails – it took a steep descent and a steep climb to cope with it. 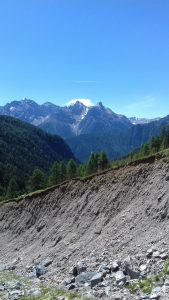 Ardez: A deep scar of debris in the green alpine meadows

Further up we run into the remains of a large avalange which reached even the other bank of the Tasnan stream. The snow was very solid, so we could easily walk over it. There were a lot of stones and larges branches that have been carried along in the snowy mass. 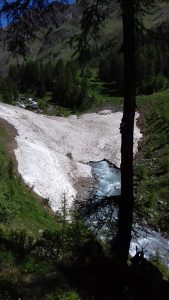 Not all snow of the avalanche has yet melted: the Tasnan stream is still covered with it 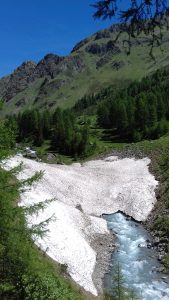 The Tasnan stream roars along while passing underneath the snow deck 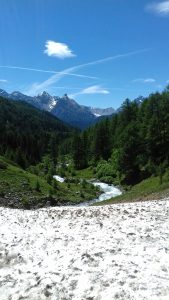 We have to walk over the snow!

Then we spotted the highest destination of our trip: the Alp Valmala. There is an orginial way of self-service: in a large tree trunk  that has been hollowed out a variety of bottles with soft drinks are afloat, “brunnengekühlt” (cooled down with water from the well) and in the window sill there is a cookie jar for payment with a notice: “Kasse des Vertrauens” (a Honesty box). On both shutters posters are placed with in alphabetical order little pictures of all goats the Alp Valmala has taken in for last summer – over 120 from 20 farmers in the Valley. We were sitting in the sun, enjoying the surroundings and eating some of our supplies. Around the mountain tops Alp choughs were flying in circles as tiny black spots. On our way to the Hut we had already spotted two impressive bearded vultures planing in high altitude –they are the largest birds of prey in Europe with a wing span up to 3 meters). A few years ago this species has been successfully re-introduced in the Swiss National Park. 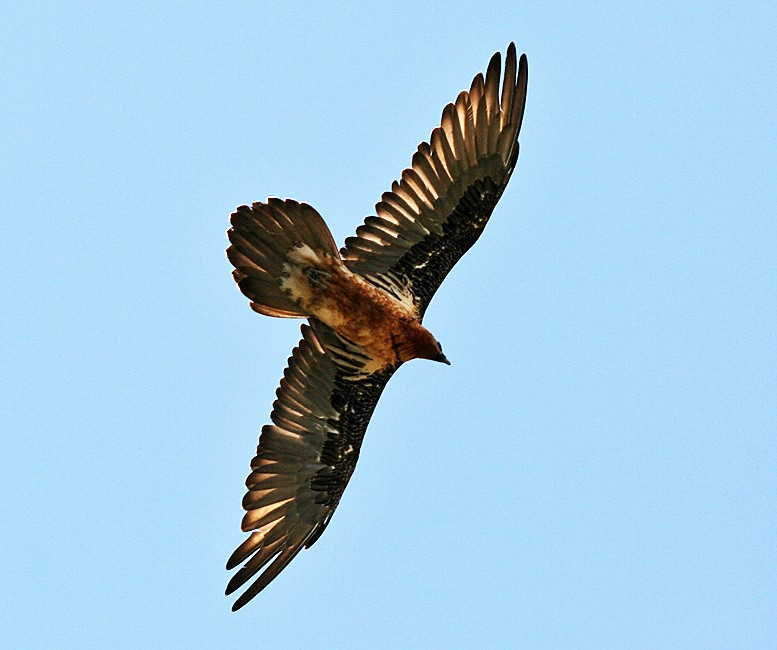 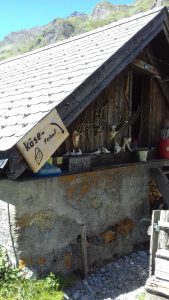 Alp Valmala: Goat cheese – fresher than this you won’t get! 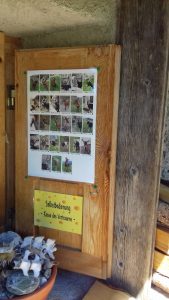 Alp Valmala: Honesty box for the payment of the beverages, “cooled in the well”

Near the bridge over the Tasnan another road sign indicates that it is still a four hours walk to the Jamtal Hut. The other directions were for the Via Alpina, along the Tasnan to Ftan, and for the Via Engiadina/ the Shepherd’s Trail of the Silvretta Historica, upwards to Ftan. 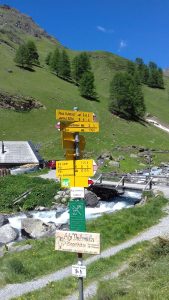 Alp Valmala: A roadsign again – do we or do we not connect with the Via Alpina to Scuol?

We opted for the latter, because now we could have something nice to eat at the farm Alp Laret. We chose a cake made of buckwheat, nuts, cinnamon and gloves with a large spoonful of whipped cream and compote of lingonberries. A surprising combination and very tasty! 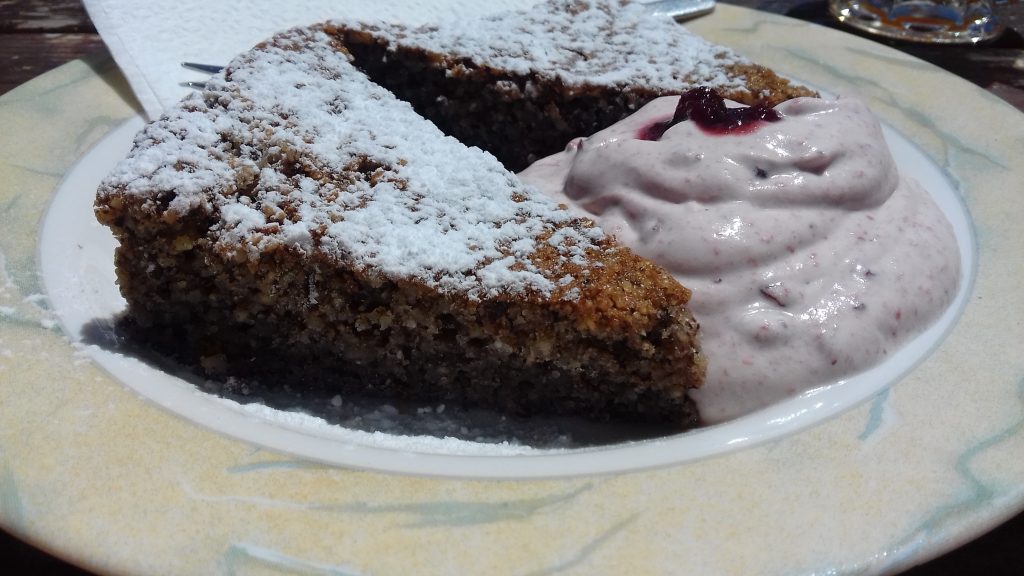 On the way down to Ftan we came across many types of fauna and flora: a mountain marmot on the outlook while lazily sunbathing on a large rock, a herd of cows (again!) on their way to the alpine meadows and a Saxifrage with white flowers, putting up to its name: “stone-breaker”. 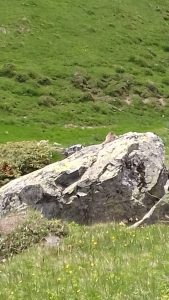 Ftan: A mountain marmot on the outlook, while lazily lying in the sun on a large rock 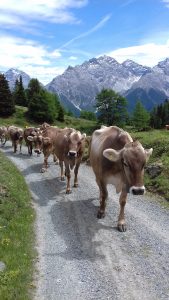 Ftan: Again a parade of cows heading for the alpine meadows 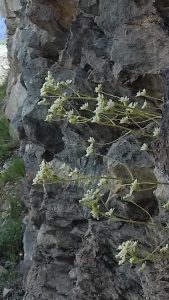 Ftan: A Saxifrage – “stone-breaker” – bravely growing from a crack in the rocks

Arriving in Ftan we took the Postauto to Scuol and settled down on the terrace of Hotel Altana for something to eat and a glass of wine. This time it was a glass of “Dus Alvs“, a wine made of – as the name points out in Rhaetian-roman – two varieties of white grapes, the sauvignon and the pinot gris. That marked the end of a very pleasant day!

It also marks the end of my first big adventure on the Via Alpina! I am looking back on a great time and I am also looking forward to the next stages…