From one valley into another valley over the Ofen Pass

Today I had still some time to spend before I would leave by train and Postal car to Mals in South Tyrol and I made a tour through Scuol – and not only into the direction of the Schulhaus, the school building! The weather was hot again and from the west menacing clouds rolled in. Rain is urgently needed here… 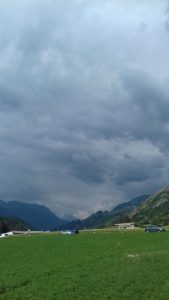 Scuol: dark clouds at the horizon in the west 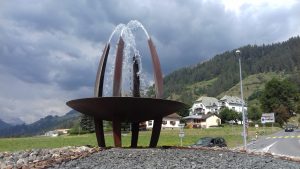 Scuol: the well-known fountain with Hotel Altana in the background

I was a bit thirsty from the short walk, so I sat down on the terrace of Hotel Altana for a glass of apple juice. That juice is made from the apples that grow on the old trees in the hotel garden. A spot in the shade was pleasant. When I was ready to leave, a torrential rainstorm started… Luckily the hotel owner offered me a ride, so I was able to get into the train without getting wet. Luxury! 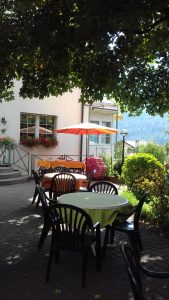 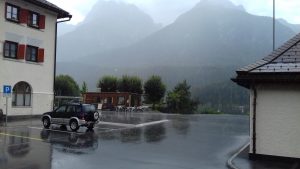 Scuol: at the railway station a sudden, very local railstorm!

The moment we left the railway station of Scuol-Tarasp, at 11.34 hrs precisely, the rain stopped! The weather held for the rest of the journey. In Zernez I changed from the train to the Postal car, which takes one-and-a-half hours to reach Mals on a road high above the ravine of the river Spöl to the Ofen Pass at 2.149 metres and through the friendly Val Müstair Valley. The scenery is very varied. After the departure from Zernez, that has relatively few old buildings left because of the devastating fire of 1872, the road slowly goes higher and has many hairpin bends. Deep down in the valley flows the river Spöl, carrying only little water at this moment. At Ova da Spin a waterpower work is situated; therefor upstream the water level is a bit more elevated. 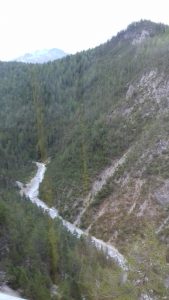 Zernez: the ravine of the river Spöl on the way to the Ofen pass 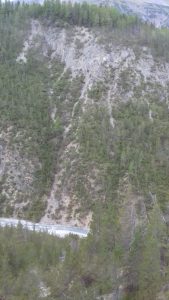 Zernez: erosion at the steep mountain slopes above the river Spöl 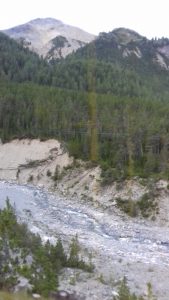 At the pass level is the Hotel “Süsom Givè”, which in Rhaeto-Romanic literally means “on the shoulder”; from this point one has a beautiful view on the Val Müstair Valley. It is a slow ascend on the road to the Ofen Pass, but from there it is a very steep descend into the Müstair valley! I found it a reassuring idea to sit in the Postal car and not behind the wheel in my own car… 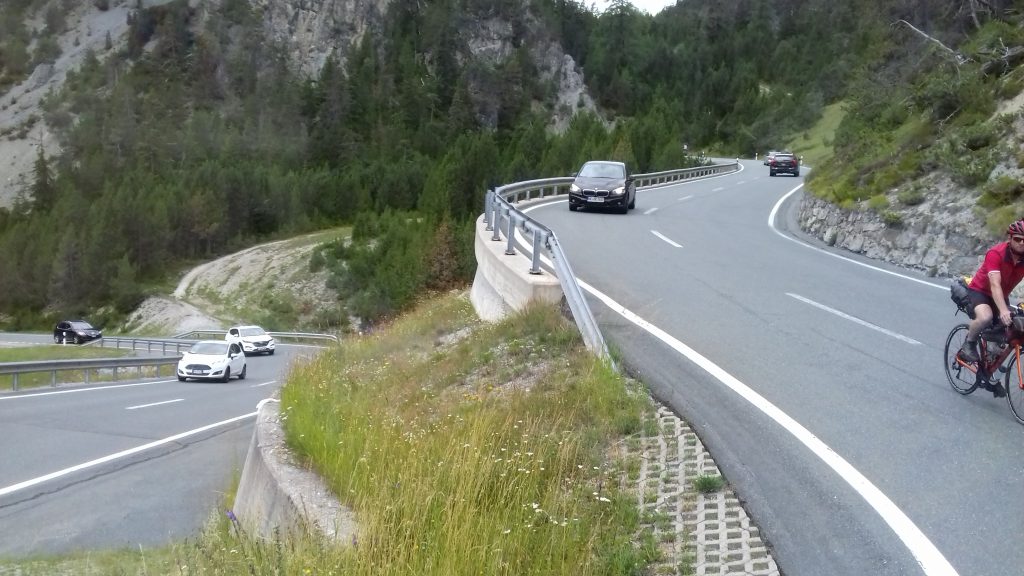 Val Müstair: one of the many hairpin bends at het Ofen Pass

In comparison with the high and wooded mountain slopes between Zernez and the Ofen Pass the Val Müstair Valley looks green, wide and friendly. As to the language, the valley belongs to the Engadin – the Rhaeto-Romanic spoken here, the “Jaur”, is not much different from the Vallader in Scuol and surroundings. As to scenery the Val Müstair Valley moves seamlessly into the long valley of the Vinschgau or called in Italian the Alto Adige. The further away from the Ofen Pass the more the grasslands change into orchards: the Vinschgau is one of the most important fruit growing areas in Italy. 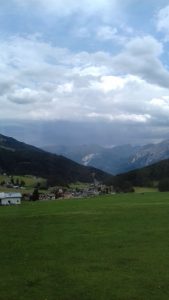 Val Müstair: view on Tschierv, the first village after the Ofen Pass 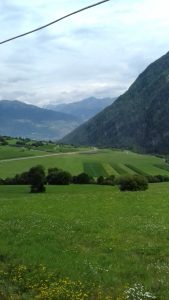 Taufers i.M.: green agricultural area on the way to Mals

Around 2 o’clock p.m. I arrived in Mals. There it was hot as well and slightly clouded. I have been in Mals a few times before when travelling from Scuol with the public transportation card, the Engadin Mobil Card: a beautiful trip, rich in diversity through three countries: Switzerland (Engadin), Italy (Mals) and Austria (Nauders). Mals is a municipality which pays a lot of attention to sustainability and ecology. Here seven hotels participate in a network of the so-called “Alpine Pearls” or as mentioned in the website a “Network of Charming Villages in the Alps Offering Green Mobility“. In this project 25 places in the entire Alpine region are involved and many hotels in different price categories. I had chosen Hotel Margun. This hotel is halfway the mountain slope seen from the railway station; it offers marvellous views. After a 15 minutes’ walk I arrived in the hotel, where I was warmly greeted. My room with view on the imposing mountain group the Ortler, was spacious, cool and pleasant. I took the opportunity to make myself at ease on my balcony and … to relax! 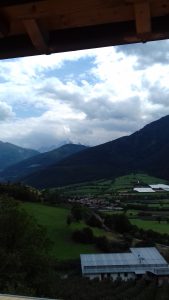 Mals: view from my hotel room – the Ortler is hiding behind the clouds

In the evening dinner was very nice: as a starter I had a “Mangoldnocken”, a kind of oval dumpling made of pasta dough with chopped chard in it. A wonderful recipe from the Alpine countries – related to my favourite “capuns”, which I have often eaten in the Engadin: with that variety a stuffing is rolled into a blanched leaf of chard and then poached. There also as a salad buffet, where I very quickly found my favourite salad: finely chopped green cabbage with caraway seeds! And of course the wholegrain bread with aniseed (it tasted like the Dutch cookie “taaitaai” which is made of rye flower, honey and aniseed, but without its sweetness!)… The mineral water Pejo Fonte Alpina originates from the National Park Stilfserjoch and the Riesling St. Michael from Eppan (a small town to the west of Bolzano). After a nice saltimbocca followed the dessert: lemon sorbet and vanilla ice cream on warmed large blackberries “from the own garden”. The Riesling also went well with the dessert. 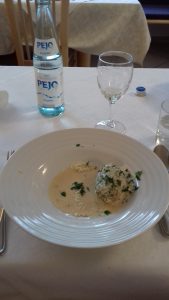 Mals: “Mangoldnocken” (dumplings with chard) as a starter 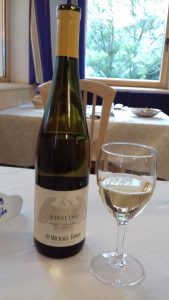 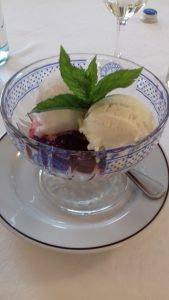 Mals: ice cream on warm blackberries “from the own garden”

I’m sure that I will enjoy my stay for the next days!

O, by the way: “Hoi Servus” is a typical greeting in the Vinschgau!