“Allegra! Eu sun rivada a Scuol…” means “Hello! I have arrived in Scuol …” in Vallader, the Rhaetian language spoken in Scuol and the whole area of the Lower Engadin. My arrival was yesterday. This morning around a quarter to nine I left my hotel, Hotel Altana, in which I have regularly stay for the last ten years and much to my delight, I started my first stage of the Via Alpina: Stage R67 from Scuol to S-charl over a distance of more of about 12½ km. It was a  spectacular hike, that started with the crossing of the river Inn over a footbridge more than a century old allowing a great view on the Church of Scuol. 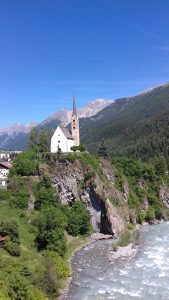 Scuol: Church of Scuol seen from the footbridge over the Inn (June 11th)

Next I climbed through the narrow and rather dark ravine through which the mountain stream Clemgia boisterously runs downhill over a distance of 2 km with a drop of 200 meters. 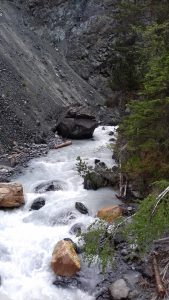 I was not only surrounded by impressive rock formations but also pleasantly surprised by spotting beautiful orchids: the first little group of Lady’s Slippers (Cypripedium calceolus) were in full bloom in a quiet spot, very near the wildly running stream. It was a first acquaintance: later on during my hike I spotted many more of them, even growing in large patches. 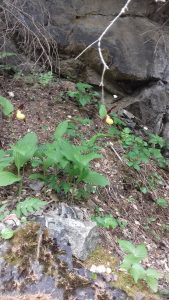 Later on the ravine gave way to a wider valley; the type of rock also changed considerably: during ages the rocks have crumbled by erosion to form enormeous mounds of scree at the bottom. It is a very dry environment with little vegetation. 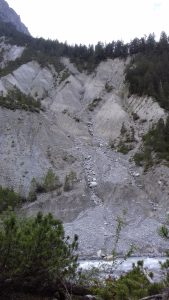 S-charl: Mounds of scree at the bottom of the mountains near the Clemgia stream

After about three hours after leaving Scuol and still half an hour to go the scenery changed again: near S-charl rich alpine meadows and lush green pine woods made their appearance. The Museum Schmelzra (dedicated to bears and mining) was closed today. 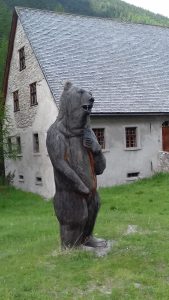 Arriving in S-charl I spoiled myself with an large glass of “Apfleschorle” (Apple Spritzer) and a light lunch sitting in the sun on the renewed wooden deck at Hotel Mayor. I sat front row for a wonderful event: it was apparently the Big Day for the young cattle to be guided towards the higher pastures in the S-charl Valley: the whole herd walked through the main street of S-charl. What an exciting finish of my first stage of the Via Alpina! 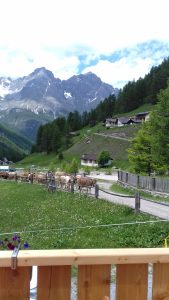 S-charl: Young cattle on its way to the alpine meadows 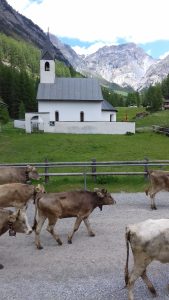 S-charl: The parade of young cattle keeps on going 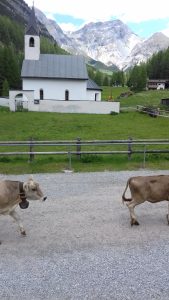 S-charl: This heifer walks on with pride 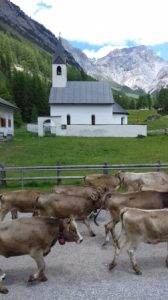 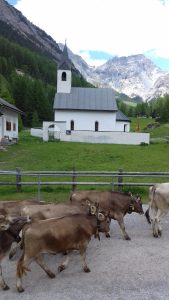 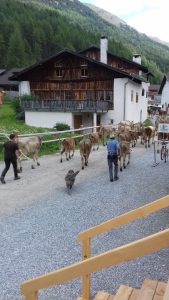 S-charl: The dog forms the end of the parade, wagging its tail!