Along the river Rhine – in Switzerland

The River Rhine has its source on the border between the Swiss Cantons of Uri and Grisons near the Oberalp Pass: in one of the smaller mountain lakes to the south of the mountain pass, the Tomasee Lake. After a long journey through Germany the Rhine finally leads near Hoek van Holland in the North Sea! A part of the water ‘though flows past Arnhem – there the river is called the Lower-Rhine…

I have been or I have hiked at several points at the course of the River Rhine (in Switzerland): a wonderful experience. Just an overview.

I have been twice near the area where the Rhine springs: on the Oberalp Pass, where slightly out-of-place a replica of the old lighthouse of Hoek van Holland has been placed to mark the connection between source and estuary: the first time when I travelled on September21st 2018 with the Glacierexpress (which is also affectionally called “the slowest express train in the world“) from Brig to Chur, and the second time when I hiked on September 27th 2019 from Andermatt over the Höhenweg to the Oberalp Pass and I was able to see the lighthouse from nearby…

From the Oberalp Pass the still young Rhine flows through an impressive gorge, the Rheinschlucht, or in the Rhaeto-Romanic of that region the Ruinaulta. The deep gorge (approx. 400 meters deep and 13 kilometers long) has been created because the Rhine has carved itself over millenniums of years a passage through the limestone of an enormous rockslide of approx. 10.000 years ago (called the “Flimser Bergsturz“). One gets the nicest views on these grayish white, steeply rising mountain slopes and the bright blue water of the Rhine from the train!

Between Ilanz and Reichenau: the “Ruinaulta”, the Rhaeto-Romanic name for the canyon-like gorge through which the river Rhine flows

Between Ilanz and Reichenau: the “Ruinaulta”, the Rhaeto-Romanic name for the canyon-like gorge through which the river Rhine flows

From Chur the Rhine flows through a rather wide valley, that is because of its special microclimate very suitable for wine-growing. A little upstream of the town of Sargans the river turns towards the north and forms there the border between the Principality of Liechtenstein and Switzerland, Stage 2 of the Green Trail of the long distance hike Via Alpina runs from Vaduz to Sargans – I hiked it on July 22nd 2017: there is a beautiful wooden covered (pedestrian) bridge over the Rhine. From the Swiss bank one has an impressive view on the Vaduz Castle.

The Rhine leads in the Lake Constance, which forms the border between Austria in the east, Germany in the north and Switzerland in the south. In Konstanz, on the west bank of Lake Constance, is the point from where the Rhine officially is navigable: at the bridge over the Rhine a sign has been put with the kilometre indication “0”. Near Hoek van Holland stands the sign with the kilometre indication “1071”, so the river has still a long way to go!

On June 7th 2019 I made a boat trip over the part of the Rhine between Constance and Schaffhausen – an idyllic trip with as a highlight the waterfalls near Schaffhausen…. 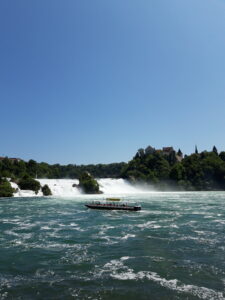 Schaffhausen: view on the waterfalls with a small sightseeing boat on the foreground and the Laufen Castle (to the right) 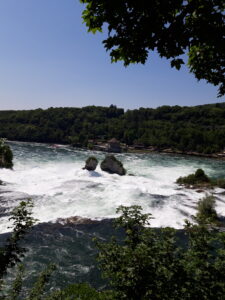 Schaffhausen: view on the Rhine waterfalls seen from the upper waters

After this roaring of water the Rhine near Basel already is much wider and quieter! On a summer day, it was June 22nd 2018, I had a stop-over in Basel, a sunny, already very old and nice city. I have crossed the river, with the Fähre, the small ferryboat, from the right bank, the quarter called Kleinbasel, to the left bank, the quarter called St. Alban. The sun was shining and the sky was blue – so is was quite a treat!

After this trip downstream the River Rhine, actually a kind of trip “down memory lane“, it has become time for new travel stories!