Bagnoli della Rosandra: Stage B2 of the Yellow Trail

The Karst: over rocks and though forests

Today Stage B2 led from Bagnoli della Rosandra, where yesterday I ended my hike, to Opicina, a small town on the mountain ridge to the west of Trieste, over a distance of approximately 13 kilometres. The weather was nice for walking and 09.40 hrs I got on the Line 40 bus that took me along the scenic route, well-known by now, to Bagnoli in the Val Rosandra Valley (it was a Saturday and the bus did not pass through the industrial areas).
This place is clearly an ideal starting point for hikes with the whole family, because I got into a kind of traffic jam of hikers of all ages who were walking cheerfully uphill through the village towards the starting point of the hikes. The Rosandra river gently whispered – it is the only river on the Karst plateau which runs above ground: the other streams have “eaten” themselves a passage through the calcareous rocks and re-appear at the surface when they flow into the sea. Here the calcareous rocks rise up to considerable heights. 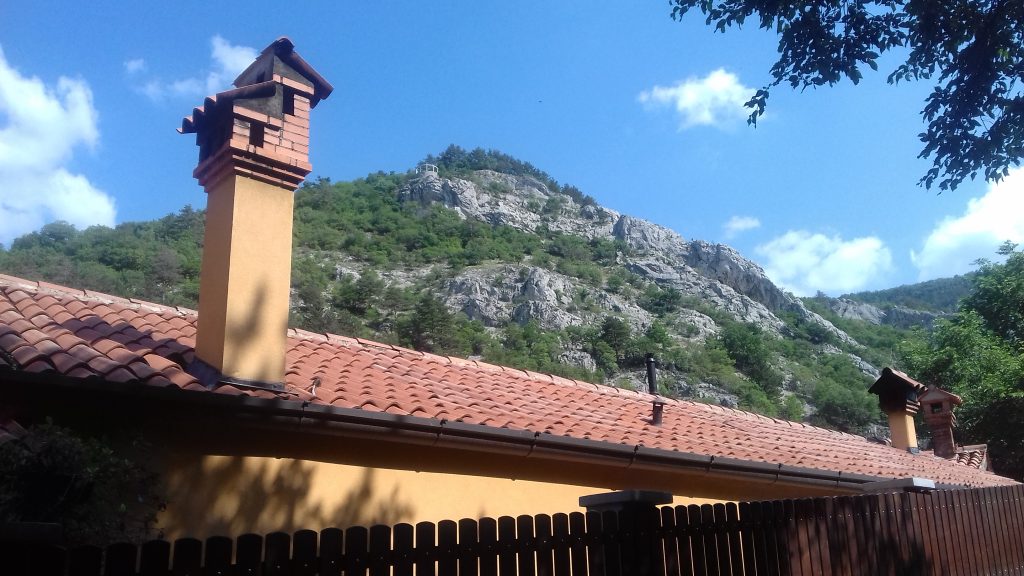 At the start I passed the remains of a roman aqueduct from the 1st century AD, that originally was 14 kilometres long and provided the city with drinking water probably until the 7th or 8th century. That indicates that this region has been already intensively inhabited for a long time. 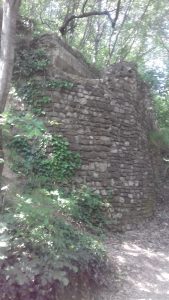 Bagnoli Superiore: Remains of the Roman Aqueduct from the first century AD

After a quarter of an hour I arrived at a couple of road signs – in Slovenian, without any indication of the Via Alpina. Not even of the Alpe-Adria Trail, but I knew for sure that I should not follow that trail at that point: it goes via Lipizza to Opicina (actually a part of Stage 2 of the Via Alpina’s Red Trail). Despite the preparations I made a wrong choice: I went to the hamlet of Mocco that passed into S. Antonio in Bosco. There I could not find any indication whatsoever. I did not reach the Premuda Hut anymore, which is the actual starting point of this Stage… Perhaps not quite silently I have been longing for those nice, yellow small signs which in Switzerland show hikers the way and I commented the once again loveless approach of the Via Alpina. Fortunately I was equipped with a good, detailed map, on which also other hiking paths were indicated, so soon after I did not walk on the paved road any longer, but on a narrow, stony and steep footpath into the direction of the old railway track that nowadays serves as foot- and cycle path for a. o. the Via Alpina. This alternative route had one advantage: there was nobody else around. I also had a good view on everything concerning the Carso: a lot of rocks, lean vegetation and many sinkholes and caves. 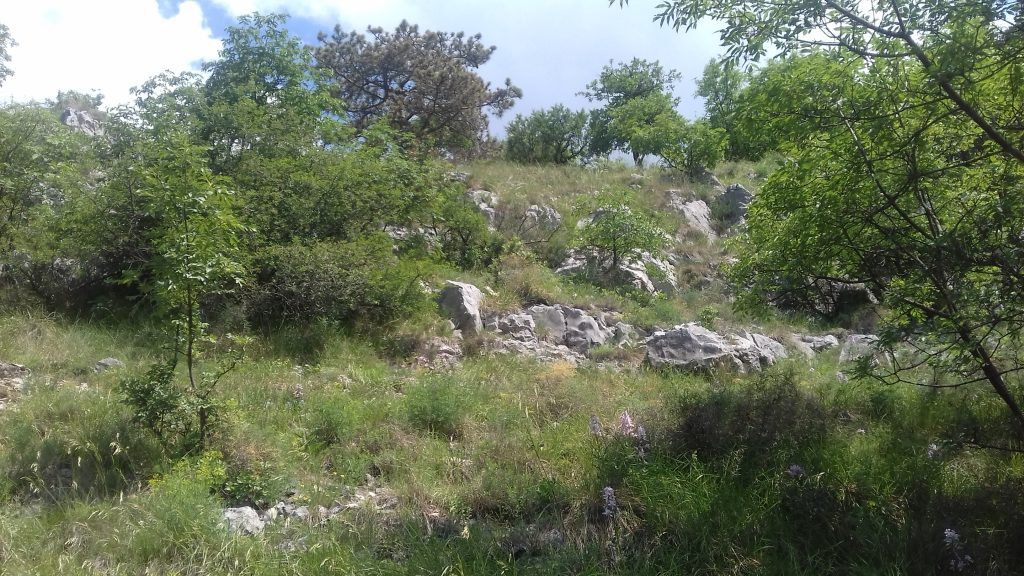 One plant that I had already seen in abundancy during yesterday’s hike is the Burning Bush (Diptamnus albus), that contains ethereal oils causing the plant to ignite spontaneously in (extremely) hot weather conditions – it is considered possible that the Biblical “Burning bush” could in fact have been this plant. It smells like vanilla and lemon with indeed a hint of petrol. The Dutch name, “fireworks plant” is derived from the popping sound with which the ripe seed pods burst open and fling their seeds far around. Another name in Dutch is “Essenkruid”, referring to the form of the leaves, looking like leaves of the ash tree. 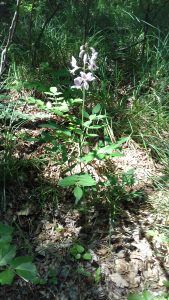 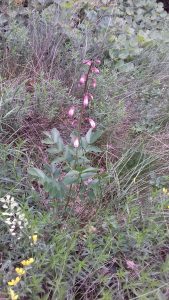 After some time the narrow path ended at a broader road leading to the west. I walked along a fence around an old, meanwhile closed quarry: Cava Scoria. On the sign attached to the gate was mentioned that the ecological damages will be repaired. That is in any case a better solution than using it as a landfill site as was the plan before! Progress seems a bit slow… 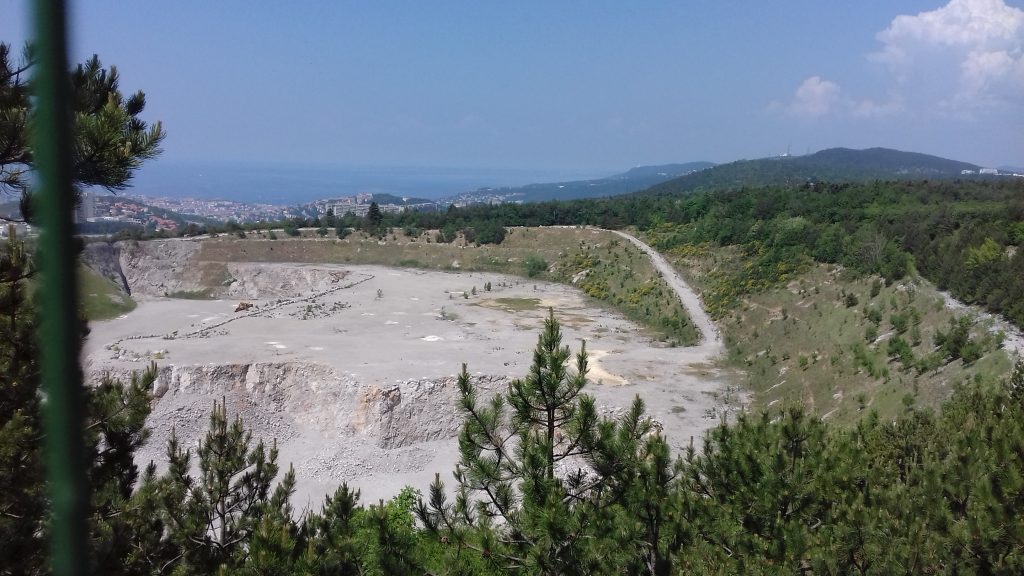 Alongside the trail I spotted many small and larger caves in the landscape; as matter of fact: I did not hear any sound of running water: that is flowing many meters under the rocks – a strange thought… 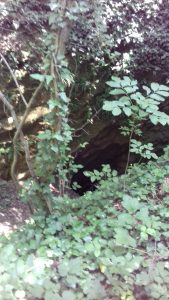 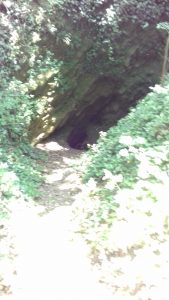 Same cave to the east of Opicina: a little overexposed 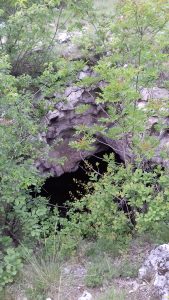 Larger cave to the east of Opicina 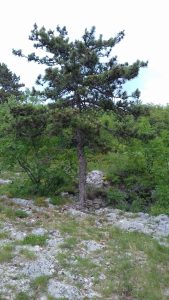 The entrance to the cave is well hidden: to the right of the Austrian pine

In the mean time I had re-joined the Footpath nr. 1 of which I had lost track somewhere in the Val Rosandra Valley and passed the Bazzoni’s Forest, a part of the large-scale reforestation project of the Karst in the middle of the 19th century. This forest is named after Riccardo Bazzoni, initiator and mayor of Trieste until 1890. 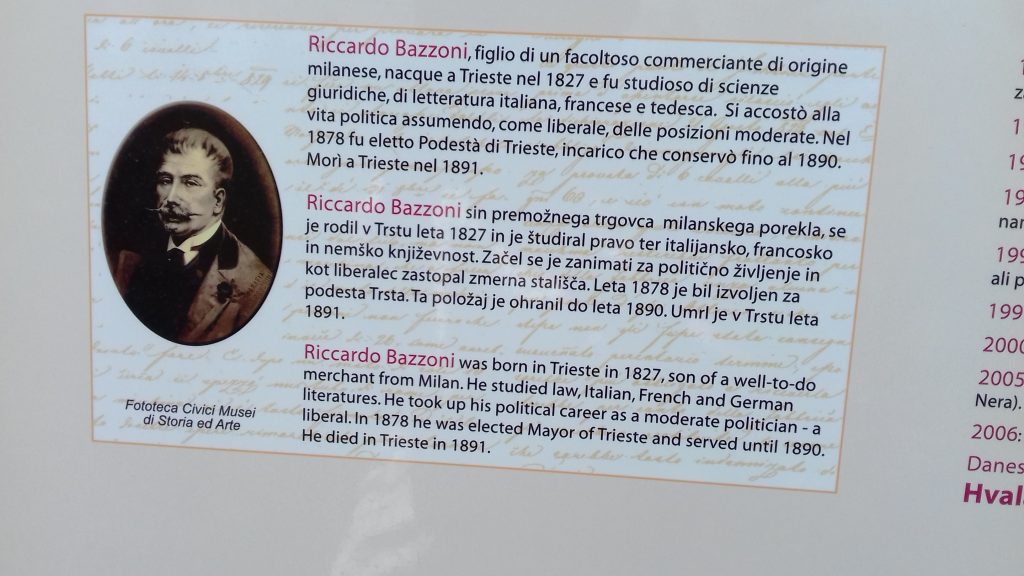 Short biograpy of Riccardo Bazzoni, after who this forest has been named

The word “Karst” has been introduced by German botanists in the beginning of the 20th century and is derived from “Karstheide”, dry land with heather. The Slovene inhabitants called the area “gmajna”, a corruption of the German “gemein”, common grassland. That is why the reforestation project met with resistance by the local population, that feared that their grassland would vanish; the project was realised by expropriation. Nowadays the land is owned by the Municipality of Trieste, but is used by the population. Back then especially Austrian or black pine (pinus nigra) has been planted, but other varieties of trees as well. Since 1990 a lot of effort is put into restoring the good condition of the woods. At several locations in the Bazzoni’s Forest information panels are placed in Italian, Slovenian and English. I read the Slovenian word for “wood”: “Godz”, and immediately recognised it: it is related to “God” in Rhaetian-roman (and also to the Dutch word “woud”). But that is just the only recognisable word…

After walking on for approximately an hour I heard some cracking in the shrubs somewhere deeper in the woods and much to my surprise a herd of donkeys walked towards the track, followed by frolicking foals and bucking and prancing yearlings! They hardly took notice of me. 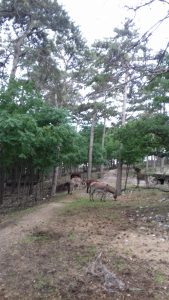 Padriciano: suddenly a herd of donkeys appears from the woods! 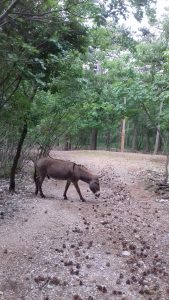 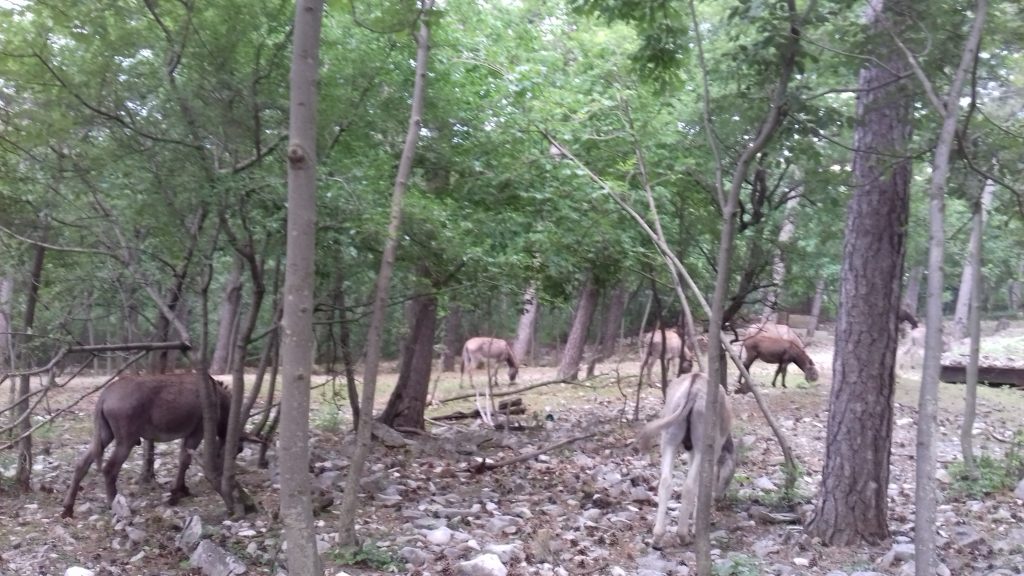 The herd of donkeys slowly moves on

The path meandered again towards the ridge. I still heard the donkeys braying in the distance, but I also spotted a roe deer, a female yearling, that startled and ran away. The path led to one of the watchtowers built along the coastline. This is “Vedetta Alice” on the Monte Calvo. Muggia was clearly visible, but also the oncoming bad weather. 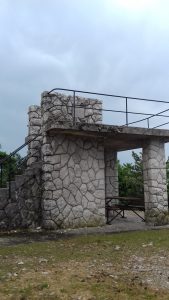 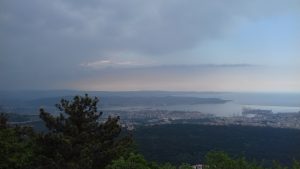 Monte Calvo: view on Muggia, …but also on a thunderstorm

In fact it didn’t take long before tiny splashes of rain were falling, not enough to put on a jacket or an umbrella, but still I got a little wet. The temperature was right, so I kept on walking. Again there was some rumbling of thunder, but the thunderstorm passed through a valley further inland. At a next interesting item I stopped: a pond in the further dry Karst area. In the past many more of these ponds existed; they formed real oasis with a special microcosmos. In 2006 the Municipality of Trieste has decided to, also because of the increased hiking tourism and the attention to biodiversity, re-install this pond and with success… 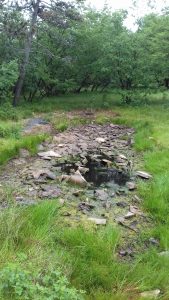 Trebiciano: a pond in the dry Carso landscape, newly arranged in 2006

Half an hour later I noticed a narrow path to a clearing with sea view and spotted a stone with a wind rose with a few prevailing winds in this region. Interesting! Five of the eight classical compass winds are mentioned. 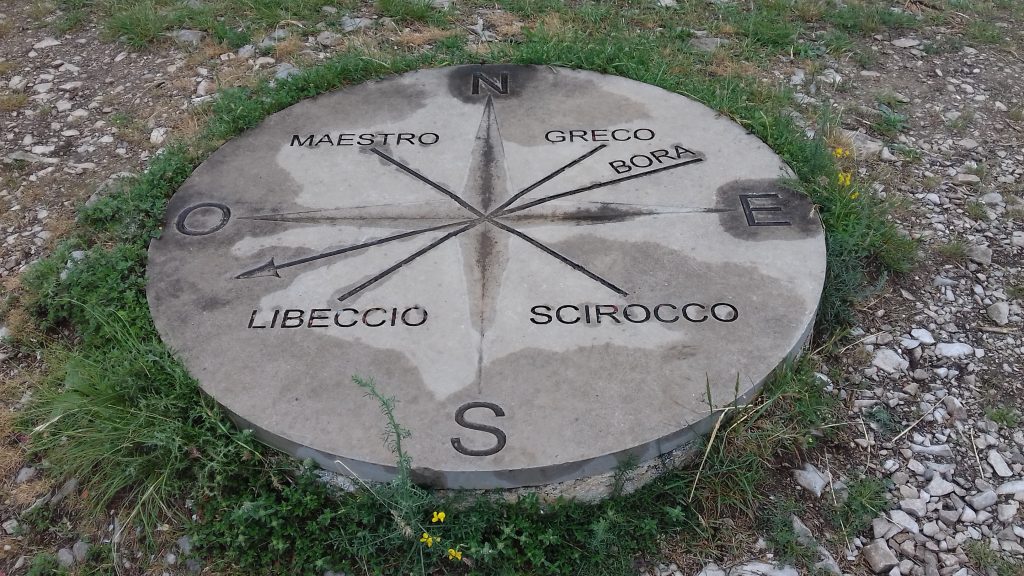 Trebiciano: a windrose with the five compass winds in this region

We think that the “Mariner’s Windrose” has been developed in the 14th century, when the data from the pilots’ logbooks of the mariners on the Mediterranean Sea were schematically represented. The Greco is a fall wind from the northeast (from Greece). The in this region feared Bora is a cold fall wind from the north (“Boreas”) which can reach high speeds. The S(c)irocco is a warm wind from the Sahara, often carrying Sahara dust along and coming from the southeast. The Libeccio (literally “from Libya”) is a strong southwestern wind that can cause heavy seas. The cold Maestro, related to the Mistral from the Western Mediterranean Sea, blows from the northwest. 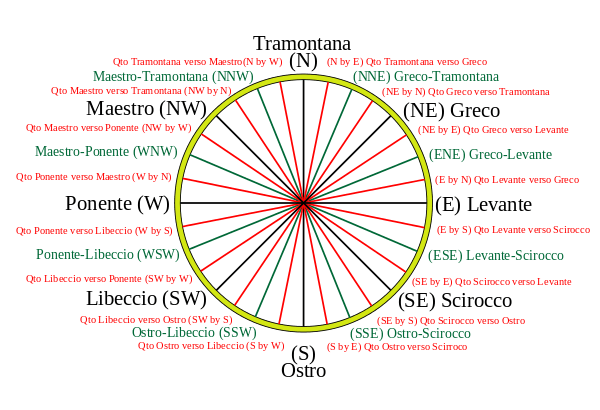 Back again in the forest, where I heard the cuckoo for the first time here, the commemoration stones drew my attention: there indications are mentioned of those wo have invested in the reforestation and therefore became entitled. On the information panel is indicated in what way the stones are to be “read”. On top the town’s seal of Trieste; to the left B = Bosco (forest), to the right C = Comunale (municipality); thereunder the year in which the replanting started, thereunder the investor’s name, and thereunder the year in which he became entitled. 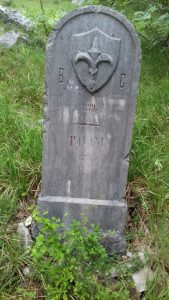 A commemoration stone with the investor’s name in the reforestation 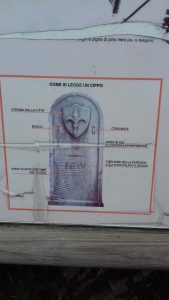 Another aspect that catches the eye are the long drystone walls without end: these have been piled up by shepherds for centuries who wanted to keep their cattle within a safe zone. They are characteristic for the Karst. 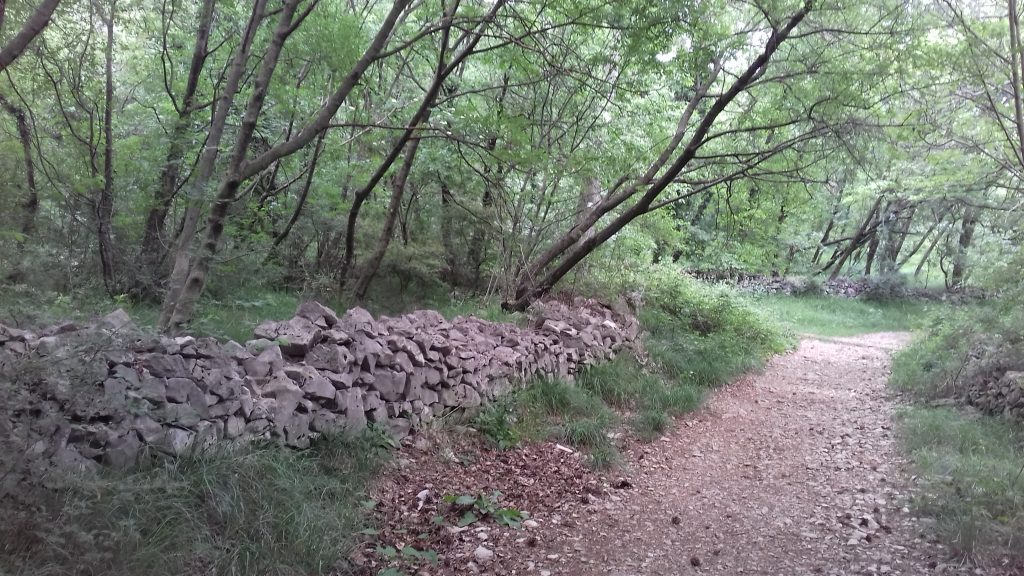 On the road to Opicina: One of many drystone walls in this Carso area

Around 16.00 hrs I reached the Obelisk of Opicina. This is a town about 4 km from Trieste at an altitude of 300 m. above sea level. The name means “rock” in Celtic. The obelisk was erected in 1830 in honour of a visit of Emperor Franz I. of Austria and of the opening of a transport connection between Trieste and the hinterland. 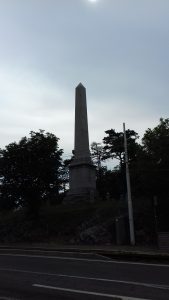 Nearby is a stop of the Tram di Opicina – as already mentioned: unfortunately the tracks are laying there unused. Therefore I returned by normal bus – ‘though mainly over or next to the tram’s route – to the city. Meanwhile the sun was shining again. After the somewhat rough start this hike continued later on through an interesting region from the point of view of forestry and geology. The views were also fascinating. Tomorrow we will continue!