Basovizza: a remembrance of the Second World War

The First of May: from a festive day to a commemoration of a massacre

This morning the sun was shining brightly: a nice perspective for the celebration of May 1st – Labour’s Day, in Italy very much an official holyday! I had read somewhere that near the little village of Basovizza, approximately 10 kilometres to the northeast of Trieste, not only still exists an authentic border control post with the former Yugoslavia dating from the Cold War, but also a national memorial for the victims of the Second World War, who were thrown into so-called “Foibe“, the deep sinkholes in the Karst in this area. Notwithstanding this horrifying background it seems to me interesting to pay it a visit, especially because the date of May 1st, but then back in 1945, has played an important role. So I took the bus, Line 39, to Basovizza. The trip fo some 20 minutes went past the university and further into the green hinterland, over a steep road uphill. I saw a warning sign that between mid-November and mid-April passage is only authorised with winter tyres or with snow chains in the car… Upon arrival in the village of Basovizza I saw people sitting on terraces, sipping coffee or even already a glass of wine. I walked down the village’s main street into the direction of the “Foiba di Basovizza” over a rural road along green gardens and a sports field, where that moment a goal had been scored, considering the cheering. Further on I heard my first cuckoo of this year.

After some 10 minutes I arrived at the memorial. It is a large area, surrounded by a wall made of piled-up light coloured stones. There also was an information and documentation centre. Along the stone walls various memorials and plaques are installed. The present memorial dates from the years after 2006, when the decision was made to re-arrange the area around the Foiba: the architect Ennio Cervi from Trieste made the design, also for the new information and documentation centre, and Livio Schiozzi (Trieste 1943–2010) has created the central memorial with the cross in 2007. A large metal plateau, with a thick crust of rust, covers the entrance to the Foiba. Behind the entrance a stylised black construction is standing of the type that has been used for the exploration of such sinkholes. In top a cross has been tied with a thick rope. On a high flagpole the Italian flag is flying in the wind. 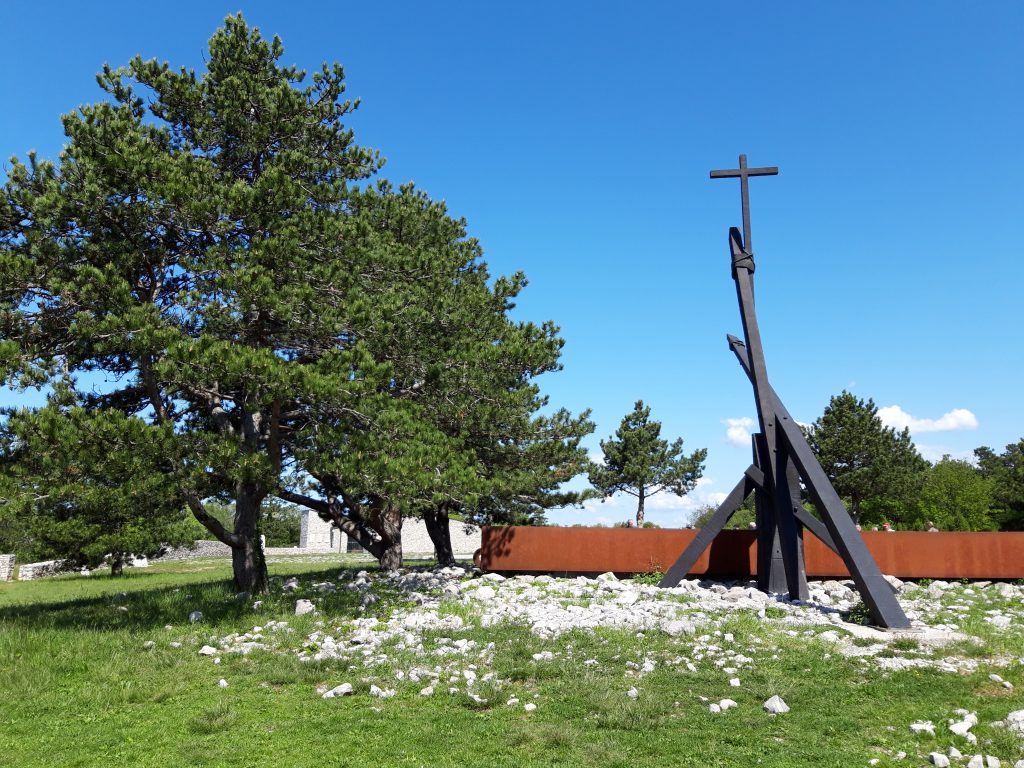 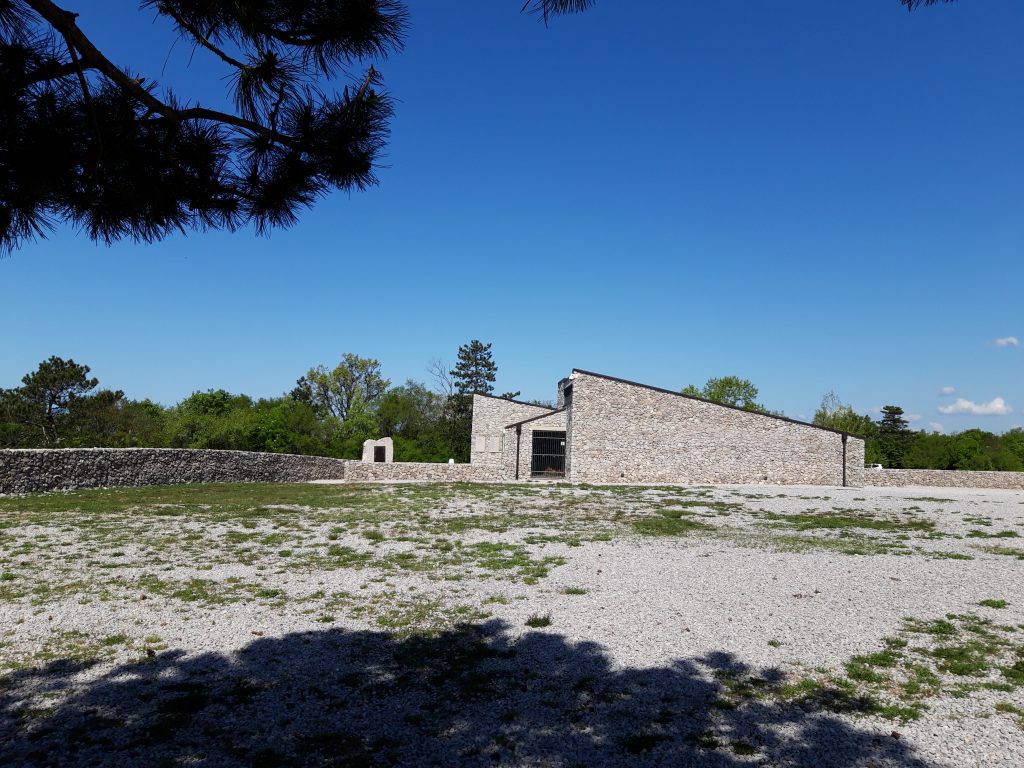 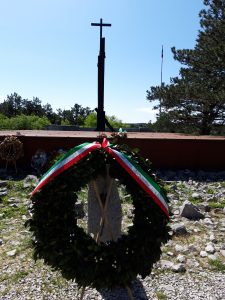 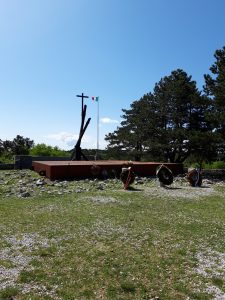 In the Information centre an extensive overview is given (in Italian) of the history of the “foibe” and of the de Foiba di Basovizza in particular. For a long time a taboo has been resting on the subject of this kind of reprisal and murder during the Second World War. It was impossible to discuss the matter in public – there hasn’t been any attention paid to the subject in education either. Since the 1980s here has been a slow change, but not without heated discussions and political polarisation. In 1980 the foiba became a location of national importance and in 1991, after the collapse of the Soviet Union and of Yugoslavia, it became an national memorial by Decree. Up to now the emotions run high on this subject, especially in the different publications on the internet, at Wikipedia as well. A role of importance is still played not only by the fascist policy of the “Italianization“, in which the Italian language was compulsory for non-Italian people on Italian territory and the ideology of the so-called “Irrenditism“, the dream that the territory of neighbouring states where large Italian speaking minorities were living would be annexed by Italy. The Lega Nazionale, an organisation from Trieste which have been fighting already since 1891 for the conservation and the advancement of the Italian language and culture, had created a website about the foibe with the motto “Ricordare – Capire“, Documenting – Understanding. Eventually all these efforts have resulted in the national memorial in Basovizza. As from 2004 Febrary 10th has been proclaimed as the “Giorno del Ricordo“, the day on which the “infoibati“, as the victims of the foibe are called, are remembered: therefore it was on February 10th 2007 that the memorial has been inaugurated. 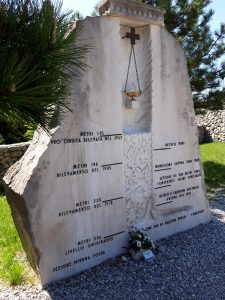 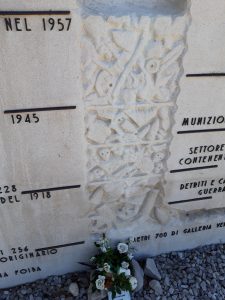 Basovizza: close-up of the schematic overview of the Foiba on the memorial stone

When I, rather thoughtful, left the Foiba di Basovizza, I saw a sign indicating the Grotta Nera. This name I had seen last year during my hike/a> from Bagnoli della Rosandra to Opcina, but then I walked past it. Now I followed a wide path which went, winding, downhill. I reached the eastern part of the Bosco di Bazzoni, the large reforestation project of the Karst, which went on during the end of the 19th century. It has been named after Riccardo Bazzoni, a mayor of Trieste, who had been a protagonist of the forest. This part of the forest is already by then created as an “experimental forest”, to see whether which trees would grow best in this climate an on this soil. In the 1970s the aspect of ecological education has been added to it. A narrow path led to an open space, where several artificial ponds were created. On an information panel was explained that in former times there were many of these “stagni” in the Karst region, but that towards the end of the 19th century after the introduction of modern stock breeding these ponds had gone derelict and silted up. In the arid Karst landscape with its own climate these ponds formed an environment for special plants and animals. In 2006 two stagni are worked out in this part of the educational forest on the advice of the division of the regional forest department. It felt good: the sun light was just filtered through the leaves – it rendered just the right reflection to the water. 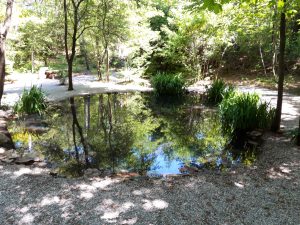 Basovizza: a „stagno“, an artificial pond, from 2006 based on examples from the past near the Grotta Nera cave 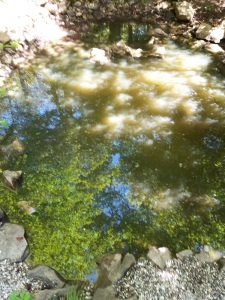 Basovizza: a “stagno“, an artificial pond, with a trail of tadpoles

Now the Grotta Nera was closed: on the first Sunday of the month guided tours are organised. The cave has already been discovered in 1893, but it wasn’t accessible because of the narrow entrance. Due to an accident with explosives during the Second World War the opening has increased to 8 metres. The grotto is of archaeological importance: special finds are done a. o. crockery. I was able to have a look through the trellis. 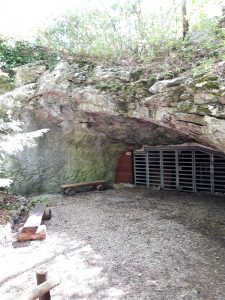 Basovizza: the entrance of the Grotta Nera cave, where extraordinary archaeological finds have been done 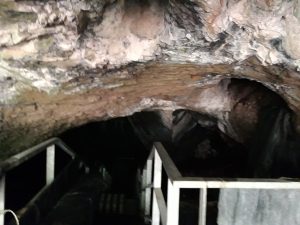 Basovizza: a glance into the Grotta Nera cave – really dark!

I returned on the same way to the main footpath and walked out of the woods. I had a wide view on the surroundings. 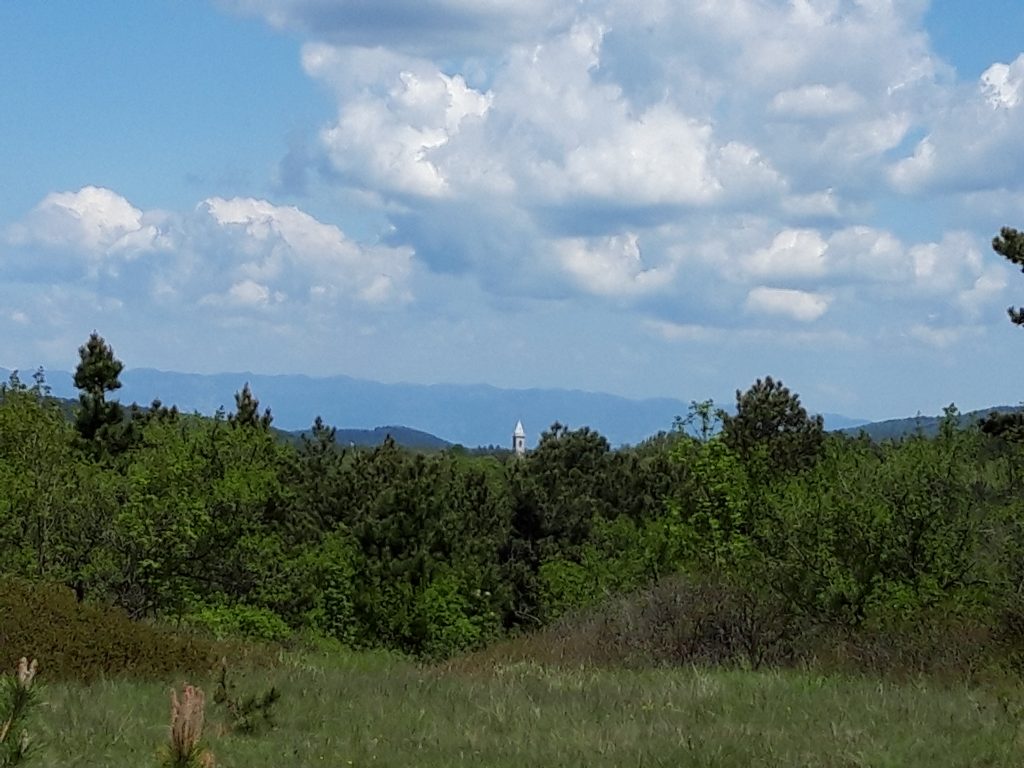 Basovizza: view from the area of the Bazzoni Forest towards the north on the church tower of Basovizza and the mountains

The weather was warm and many flowers were already in bloom, a. o. an orchid with beautiful purple flowers called Broad-leaved marsh orchid (Dactylorhiza majalis) and somewhere in the shade a white orchid with open flowers, a Sword-leaved helleborine (Cephalanthera longifolia). Furthermore several manna ashes or South European flowering ash (Fraxinus ornus) were in bloom with large white plumes. – last year I arrived too late to see the flowers. 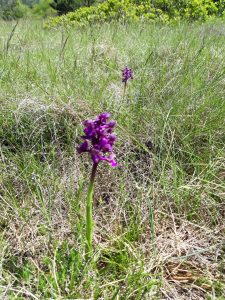 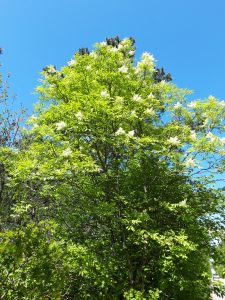 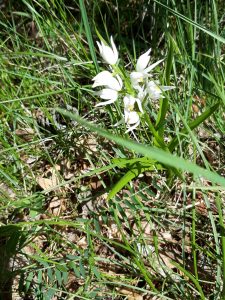 With a detour I reached the village again, where the bus back to Trieste would leave only half an hour later. I couldn’t resist the temptation of real Italian ice cream and entered the Icecafe on the village’s main street. I chose Pistachio, Amarena and Lemon sherbet, that I ate along with a cup of espresso, sitting on the sunny garden terrace. 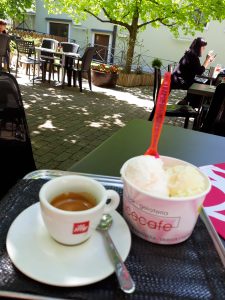 When I returned in Trieste around half past two, I noticed a plaque on a building’s wall on which was written that in this house the first meeting of the Lega Nazionale had taken place – with its purpose clearly indicated. This was today’s full circle! 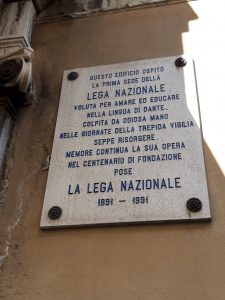 Trieste: in this plaque is mentioned that in this building the first meeting of the Lega Nazionale has taken place

About half past seven I went into town for dinner: at theTrattoria al Collio, partly because the Collio is situated to the north of Gorizia, the town I am heading to tomorrow. It was a nice dining room with a high ceiling, tables with red-chequered tablecloths and wooden rush-bottomed chairs. I chose marinated anchovies with – the regional special – pickled onions, a plate of spaghetti with tuna (I got just a fork, and no spoon, so it took a while to get the hang of eating the pasta…!) and a dish called “seppioline griglate” with baked polenta. Interesting dish, because it turned out the be grilled squid! A glass (or two) of Pinot Grigio completed the meal. 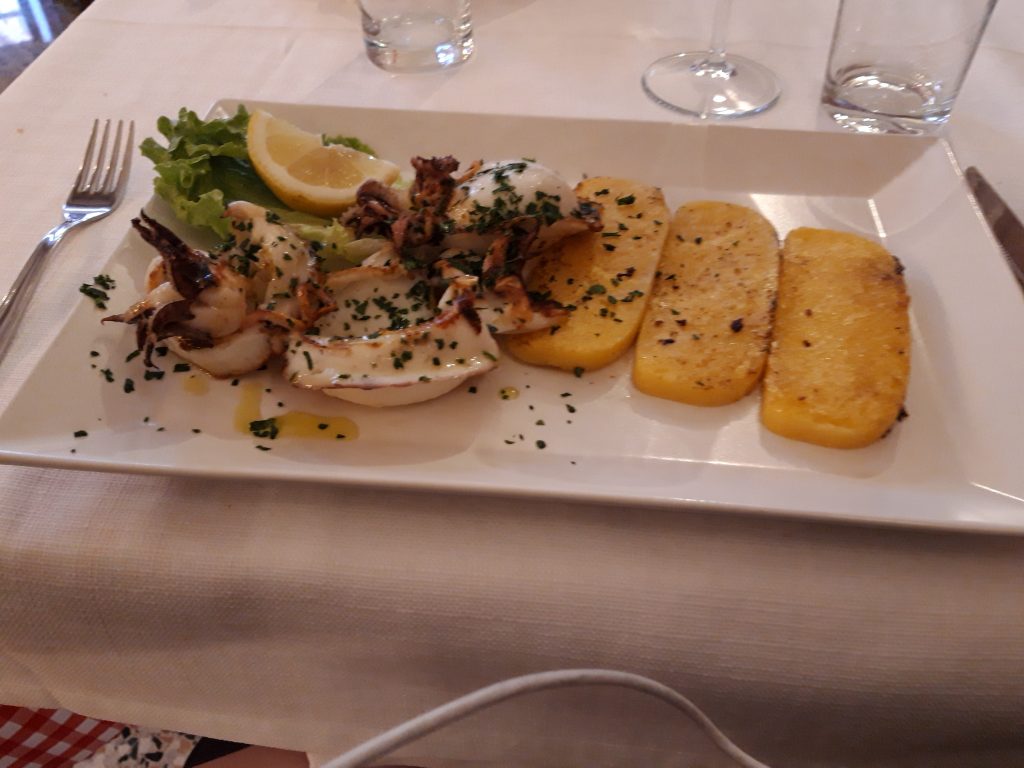 That was the way this meaningful day ended, and also my stay in Trieste this time – quite a memorable stay!