Cormons: Stage B5 of the Yellow Trail – part 1

From Gorizia to Cormòns: through the winegrowing area of the Collio

After the heavy thunderstorms of last night and the extensive rain in the early morning I left around 11 o’clock for my hike through the Collio, the Gorizia Hills, the winegrowing area to the (north-)west of Gorizia. Therefore I first went to the west to cross the river Isonzo (in Slovenian Soča). Here the river is wide with artificial rapids; I crossed it over a long footbridge. 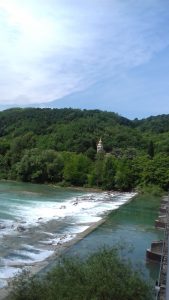 Gorizia: a rapid in the Isonzo River under the footbridge 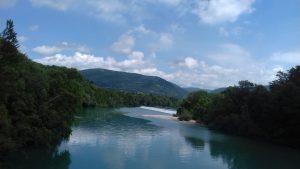 Gorizia: further upstream another rapid in the Isonzo River

After having walked along the public road and the river for a while, I took a narrow, rather steep paved road to S. Floriano del Collio, the main village of one of the municipalities in the Collio. It is situated on top of a mountain and the white church tower can already be seen from Gorizia. All around everything was green and still wet from the rain. I passed through small hamlets with vegetable gardens, beehives and roses in bloom. Many flowers grew at the side of the road; some of them I recognised, for others I need to do some more studying… 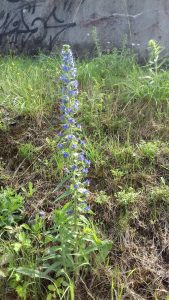 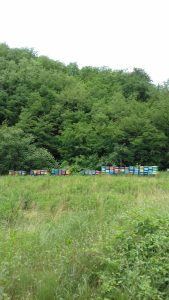 Gorizia: in the hamlet of Groina there are a lot of beehives 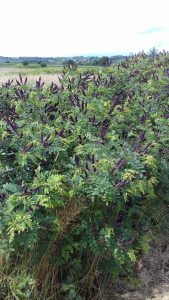 After one-and-a-half hours I came from the wooded hill into the openness of the hilly winegrowing area. Everywhere and as far as the eye can see the rolling hills are planted with vines and fruit trees (cherries!), a mosaic of green lines of the plants and red lines of the soil. When I almost arrived in S. Floriano del Collio I was welcomed by a huge wall painting. A real eyecatcher, which was still visible from quite a distance. 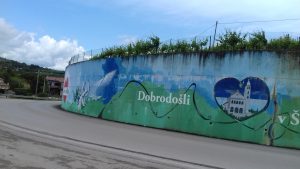 Cormòns: in S. Floriano del Collio is Dobrodošli written on the wall 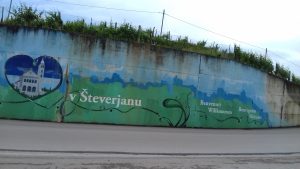 Cormòns: in S. Floriano del Collio the translation is also written all over the wall…

Further I followed for the main part the Strada del Vino e delle Ciliegie, the Wine- and Cherries Trail. Along the road many cherry trees grow, that already carried nicely ripened fruits. I could not resist the temptation and picked and ate a few handfuls. Very refreshing and thirst-quenching. The view on the endless vineyards, olive groves and the cherry trees brought a lot of tranquillity – except for the cuckoo that made itself heard loudly. Many plants were growing on the sides of the road and against the slopes: roses, fig trees. It was quite a pleasure to walk on this road with so many views. 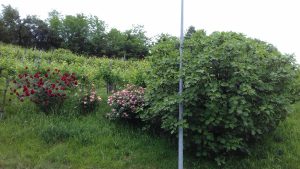 Cormòns: roses, fig trees and vines in the Collio 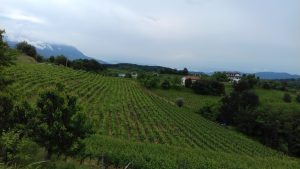 Cormòns: view over the Collio with in the distance the blue of the wall painting

After a long walk over the Wine Trail the landscape slowly started to change. But still the soil kept its reddish-brown colour: the “terra rossa”, for which the Collio is renowned. 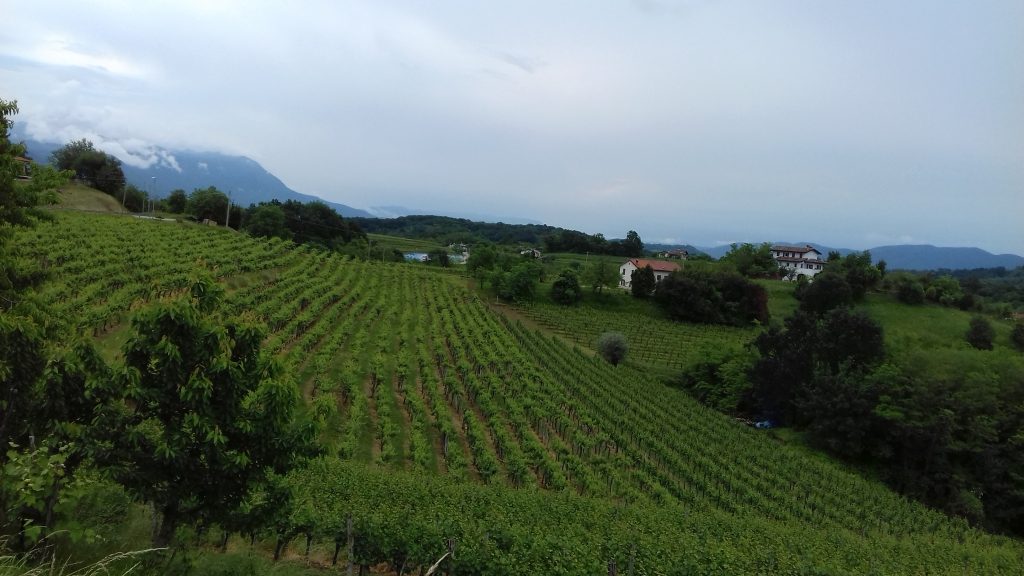 The surroundings became somewhat rougher and wetter: I approached the wetlands of Preval. I had to walk alongside a busy road; all of a sudden I spotted a roe buck in a rather unkept peach orchard  that in a sprint crossed the road towards a vineyard at the other side ‒ taking the pedestrian crossing…! Funny.

In the natural reserve, that is criss-crossed by cycle paths, I was unfortunately unable to see any of the small lakes, but I did see a male hen harrier (Circus cyaneus) fly and “pray” somewhere. Such a large bird of prey!

After an even longer walk I reached Cormòns. A quarter of an hour before I passed by a very old, but special small chapel: the Chiesa della Subida. It is built on the spot where in 1597 a miracle had supposedly happened: drops of sweat fell out of a crucifix. The small church lies on a higher point than the road with a nice view on the area around Cormòns. The pedestrians are led by the church and luckily not through the dark and sharp turn! 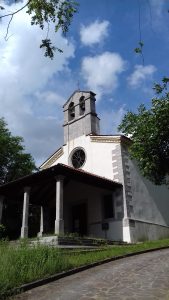 Cormòns: the small Chiesa della Subida from the 16th century

In the evening I went out for dinner. There is a street running to the west from the Piazza della Vittoria, the Via Oberdan, with many restaurants. I chose Trattioria-Gostilna Alla Luna. It is a restaurant in a long and narrow building, the interior loaded with bric-a-brac: old keys, horse shoes, little table-cloths, suitcases, dolls and all sorts of things. This made the atmosphere very cosy. At half past seven I was the first guest, but during the evening the restaurant was fully booked. I was allotted a table in the corner: I had an excellent view over the place. 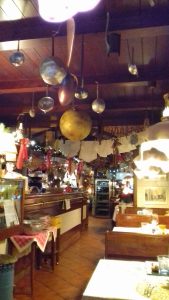 Gorizia: interior of the Trattoria Alla Luna including a globe of the moon

One glance at the menu made clear that the emphasis is on the Slovenian cuisine. After a welcome drink (a glass of Ribolla gialla, with bubbles) and a kind of meatball with slightly tangy beef, my first course was served: a large plate of “Lardjel”, a kind of refined smoked bacon on rolls of lightly salted ricotta and leaves of lamb’s lettuce and grated lemon- and orange peel sprinkled over it. After that two “palačinke”, crepes with seasonal vegetables (zucchini) and grated cheese from the region and as a main course Kranjska klobasa, Carnolian sausage served on sauerkraut with onion and caraway and two blocks of polenta. Wholegrain, not too sharp mustard in a mini-pan was served aside. The dish was presented in a nice way: in a sheet of cellophane, keeping the heat inside the dish. A modern touch to a classical Slovenian dish. Everything was accompanied by a few glasses of red house wine, containing all the power of the Collio-country through which I have been hiking today. As a dessert I had a lemon-basil sorbet ‒ an excellent digestive! 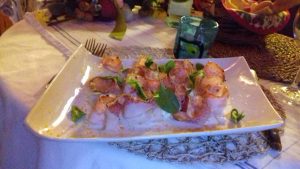 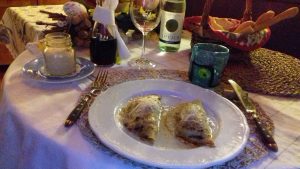 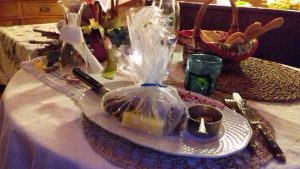 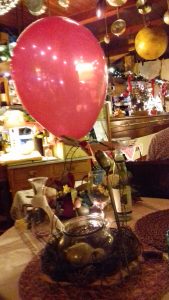 It was a nice way to end this hiking day!