This day promised to be quiet warm when I took early this morning the 7.45 hours Postauto to S-charl – the place I ended my first stage of the Via Alpina yesterday. At a quarter past 8 I started my second stage. A sign on the last building in S-charl shows the walking distance to Taufers: 16 km. 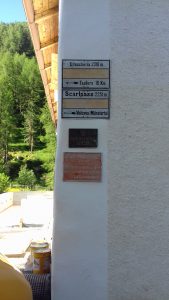 Only a quarter of an hour on my way I was surrounded by a herd of cows (no, not yesterday’s herd!), who seemed to consider me sort of their “cow girl”. I kept on walking in a slow pace, while gently talking to them, with the signs in mind warning the public that mother cows will be very protective over their calves… 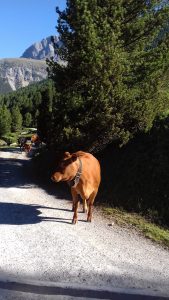 Val S-charl: A cow that follows me, although looking back for the others 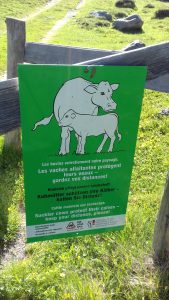 Val S-charl: This message is quite clear – mother cows are protective over their calves…

Near Plan d’Immez (1.976m) a signpost points me into a direction which I never went before: towards Taufers en this time not towards Lü or the Ofen Pass… On this spot two long distance hikes go their separate ways: nr. 43 is the Via San Giachen, the Swiss part of the Route of St. James (from Müstair by Davos to Seelisberg) and nr. 45 is the Nationalpark Panoramaweg (Swiss National Park Panoramic Route , a hike from Scuol– Müstair – Zernez – Scuol). 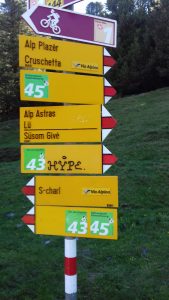 Val S-charl: On a crossroads – going into the direction of Taufers

From there a rather equal levelled climb from 1.976m through a wide valley took me to the Cruschetta / S-charljöchl Pass at 2.298 meter: at first over lush meadows and later on through a rough and stony landscape with a lot of small streams. Everywhere lots of astonishingly blue gentians were in bloom. A cuckoo’s call accompanied me for a while – otherwise the silence was impressive. On the Pass I passed not only the border with Italy, but also a watershed: from this point on the water in the streams no longer flows through the rivers Inn and later the Danube towards the Black Sea, but it flows to the river Adige in South-Tyrol passing by Verona towards the Adriatic Sea – a fascinating thought. 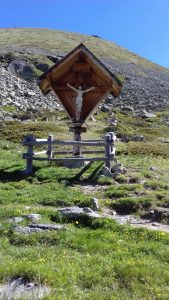 A quarter of an hour later I passed a tiny alpine hut, the Jöchlhütte, that can only be reached by a very narrow, stony and steep path. The climb came with a reward: what a wonderful panoramic view! 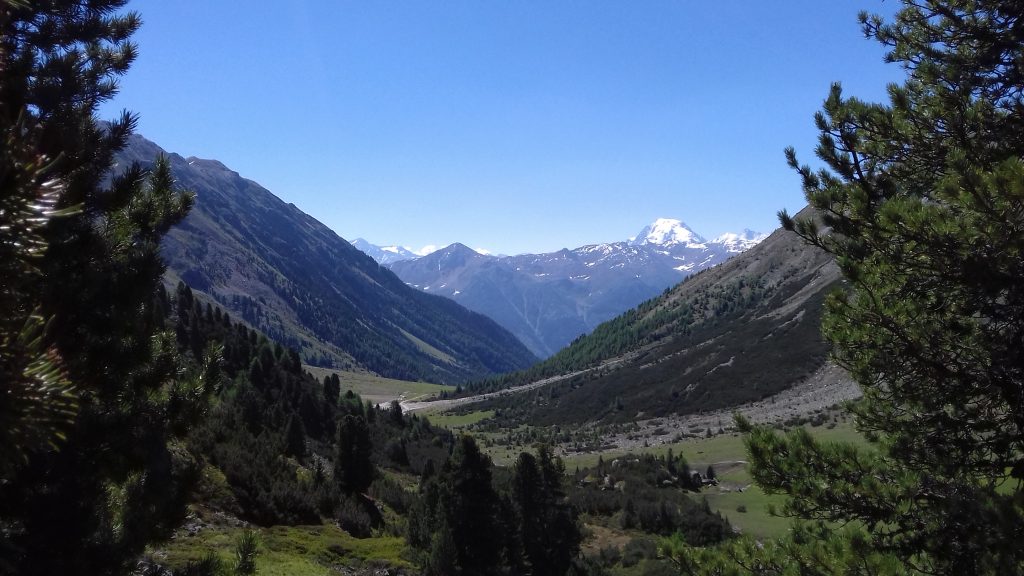 Taufers i.M.: First views into the Avigna valley with the Ortler in the background

The hut itself looked quiet “gemütlich“, cosy, but is probably somewhat cramped for 4 persons. There also was a “Hüttenbuch“, a logbook in which I wrote a few lines: that I considered the few minutes I spent sitting on the bench to be the gift of the day. 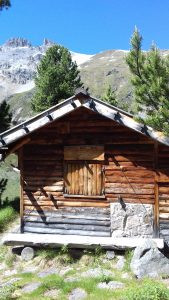 The Avigna Valley is vast and very quiet: murmuring little streams, hardly a cow bell chiming. The upper part of this valley shows a sea of flowers in yellow, white, pink and of course gentian’s blue again! It was quiet warm and almost without wind: I walked in a cloud of delicious fragrances. This was also a moment of bliss! 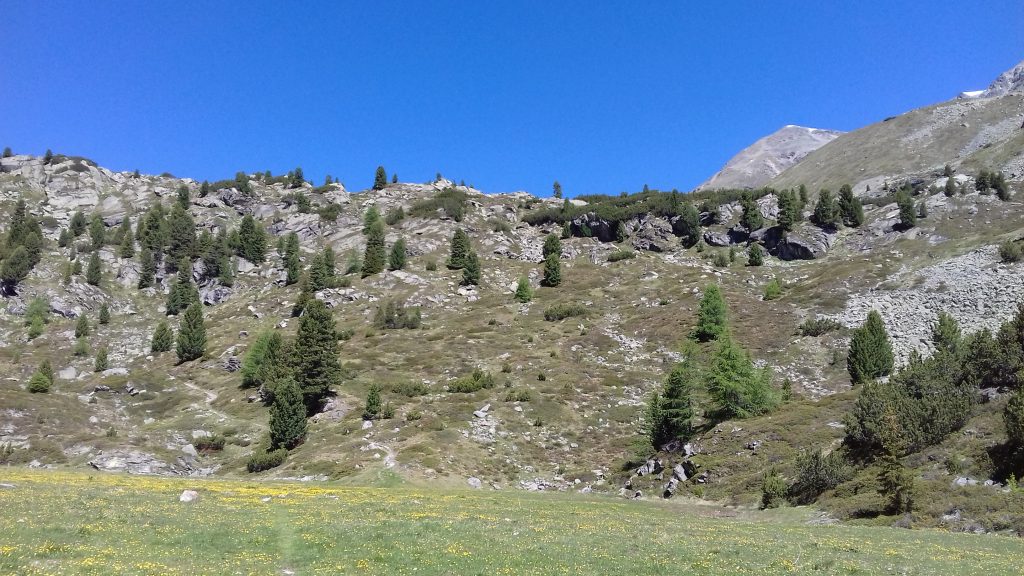 Taufers i.M.: Looking back from the Avigna valley in bloom

Further towards the bottom of the valley (with an overall difference in altitude of over 1.000 meters!) the alpine meadows were clearly used in a more intensive way: more grass and less flowers. In the last part of the walk the path went through a forest of spruce-firs and larches – I was pleased to walk in some shade! With still 10 minutes to go towards Taufers’ village centre I passed an old saw mill, powered by water. Also a place to cool down! 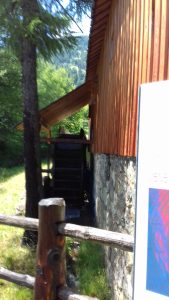 The village of Taufers in sight I came across another map of the Via Alpina, mentioning the next stage towards Stilfs/Stelvio. But that will be for another day! 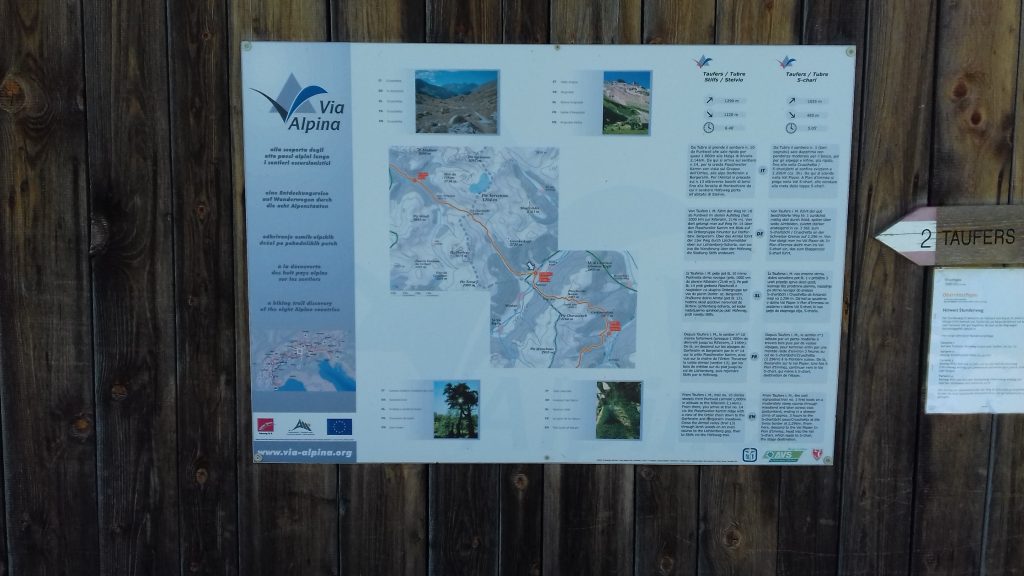 Information panel on the Via Alpina in Taufers i.M.

Arriving in the village I was just in time to catch the Postauto to  Mals in the Adige Valley. From there I took another bus via the Reschen Pass in Austria to Martina, the last village on the river Inn in Switzerland. This day I hiked and travelled through three countries!