This morning the weather was bad – it was very cloudy, but still dry ‘though. That would not be the case for long… During the past evenings and nights, when there was little traffic noise, I had heard how the water in the river Landquart that flows to the south in the narrow valley, had been “growling”. So I decided after a visit to the local supermarket to have a look at the water. The water, that normally has a bluish colour, was greyish-brown and roared with high speed underneath the ridge, carrying along all sorts of things, from branches to complete trees… 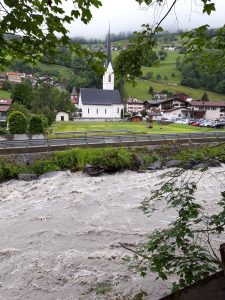 Küblis: the river Landquart flows at high speed, with the church in the background 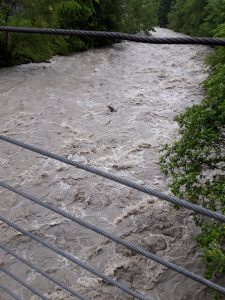 Küblis: the river Landquart, seen upstream from the bridge near the Marktplatz, carries along a large bush 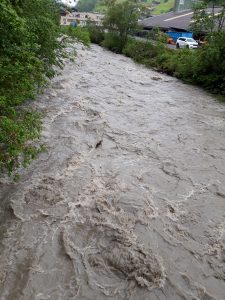 Küblis: a few seconds later the bush has already been taken along under the bridge near the Marktplatz over the river Landquart downstream 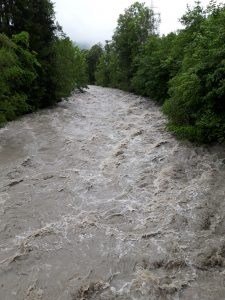 Küblis: the river Landquart is now that wide that the branches of the trees on the banks almost touch the water 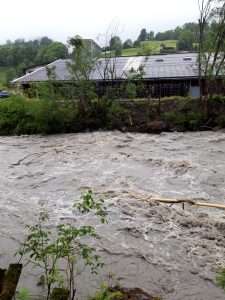 Küblis: another bush is carried along by the wild water of the river Landquart 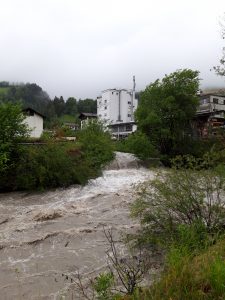 Fascinated I walked on along the speeding Landquart. To the westside of the village I arrived at a big information sign. Thereon was mentioned that here in autumn of 2017 a huge project has been executed: the revitalising of the riparian forest of Dalvazza, the “Aue Dalvazza“. The Dalvazza Riparian Forest belongs to the type of what in German is called Weichholzauen, the riparian forest with varieties of soft woods, like the willow, poplar and alder. This type can be found in alpine areas. In Dalvazza a large part of the poplars and alders have been cut down to create a riparian landscape and thus create a better biotope for a. o. the Kingfisher, amphibia and dragonflies. Moreover the area had been completely overgrown by the Japanese Knotweed (Fallopia japonica) – yes, also here! By dredging deep the most rhizomes have been removed. The furrows that have been created offer an excellent habitat for amphibia. However measures had to be taken to protect the industrial zone of Küblis against flooding: therefore sheet pile walls have been placed on the north bank of the river. One of the characteristics of a riparian forest is the ever changing water level – which was quite visible right now, and audible as well! From the higher road I had a nice overview on the result of the interventions. On the information panel two pictures were shown: one before and one after the measures. 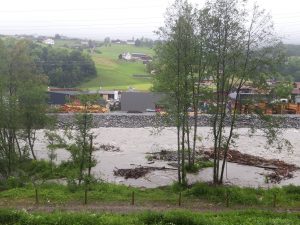 Küblis: near Dalvazza a riparian forest has been created – the room for the river is needed now! 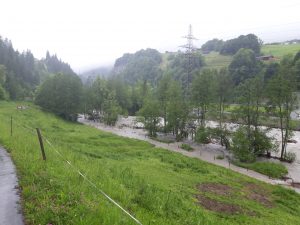 Küblis: the water of the river Landquart rushes through the riparian forest

Küblis: Aeral picture of the former situation on the information panel about the creation of the riparian forest along the river Landquart 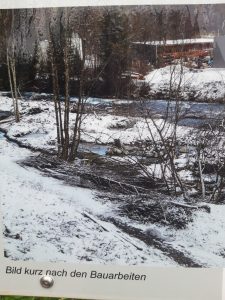 Küblis: picture of the endresult on the information panel about the creation of the riparian forest along the river Landquart 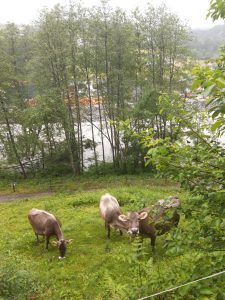 Küblis: these cows in the riparian forest keep their feet dry – for the time being!

After I left the riparian forest and the cows behind me I walked on, because I had the idea to go the next village, Fideris – from there I could take the bus back to Küblis. The road descended slightly until near the river: here I could clearly see what the Landquart was carrying on… The water was splashing high against the pillar of the traffic bridge!

Küblis: a tree trunk is carried along by the rapidly flowing water of the river Landquart

Küblis: the water of the river Landquart rushes underneath the bridge

After I had passed underneath the traffic bridge, the side road to Fideris ran steeply uphill along the Arieschbach stream, which added a lot of water to the Landquart too. Meanwhile it had started to rain heavily… When one travels through the valley by train and passes by the railway station of Fideris, with only a few houses and a wood processing company, one has actually no idea of a village on the shoulder of the mountain at 900 metres altitude with beautiful and well-kept mansions dating from the 15th century. This village and the neighbouring Jenaz are the only places in this part of the Prättigau that have been spared from destructions by the Austrian armies in 1622. The village has been mentioned for the first time in an official document in 1379. The area has been inhabited for a long time: a lancet point has been found near the village, dating back to the late Bronze Era (1300–800 BC). Previously the road from Landquart to Küblis ran over the mountain shoulder through Fideris: in the valley the risks of flooding were too high – that seems very realistic to me as I had seen the quantities of water in the river today! I have sheltered from the rain in a garage of which te doors were opened, to check at what time the next bus would leave for Küblis – I still had an hour. On the house with the woodwork that had been darkened by weather and wind a nice saying had been written: “Geh ohne Gruss und Gottes Wort nie aus deinem Hause fort” (Never leave the house without greeting of God’s word). I continued my way to the centre of the village. At that moment school went out and a girl passed me by: “Hoi!” – “Hoi!“. 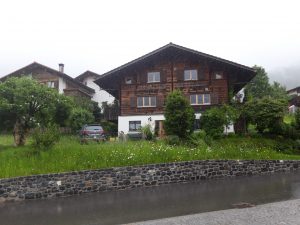 Fideris: it is raining cats and dogs, but the saying on the house is beautiful! 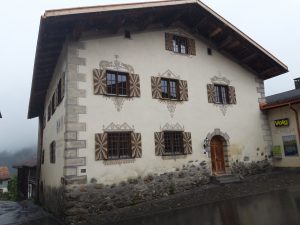 Fideris: one of the old mansionlike houses from the 15th century in the village centre

On the village square I found a restaurant that had opened, Restaurant Ritterhof, in a nice old building. On the terrace wooden were tables and benches that were visibly new: they stood out very yellowish against the dark and old woodwork of the buildings around and the dark green and wet forest on the slopes. Inside it was warm and cosy. I sat down at a table and ordered a cup of coffee and “Haben Sie auch Kuchen?” (Do you have any cake?). An etagere stood on the table with a. o. Fideriser Torte, a speciality of this village. The cake was made of dough with flour and ground hazelnuts and filled with raspberry jam – this variation on the Linzertorte is very good indeed!! This Fideriser Torte had a long history: already in the 15th century people from all over the world travelled to Fideris and surroundings because of the mineral water coming out of the mountain in Bad Fideris at the banks of the Arieschbach stream. The bakers in the village didn’t only make bread, but also cakes and pies, like this Torte. The master baker Gujan from Fideris is the only one to make this treat, and already is the fourth generation of bakers. Nothing is left anymore of the Bad Fideris: after its closure in 1937 the once so famous bath has been destroyed in 1967 by a landslide, covering the source…

In the restaurant the owner decided to light the fire for extra comfort, which was soon spreading a nice warmth. He had just forgotten to activate the ventilation system: in no-time the whole room was filled with smoke. This led to the hilarious situation that he and his wife had to open all doors and windows to let the smoke escape – and with the smoke also the warmth! We had a good laugh about it. Nevertheless it had been an pleasant stay before I took the bus back to Küblis 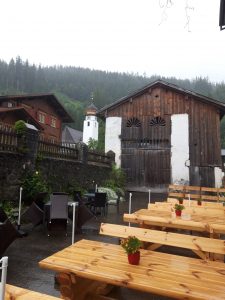 Fideris: it is very wet on the terrace of the Restaurant Ritterhof… 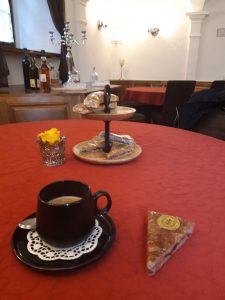 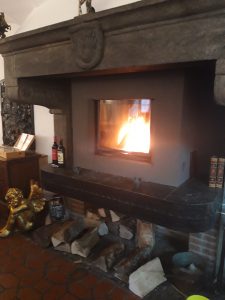 Only to the end of the afternoon the weather improved, but I could look back on an interesting day with a lot of water in various forms! Tomorrow I take the train to Davos and from there further to Filisur with the historical train, drawn by the locomotive “Krokodil“. My destination will be Scuol for the last part of this journey. Then I will also report on the Kirchner Museum that I have visited yesterday!