Protection of nature and cycling

The weather seemed somewhat changeable, so I decided to enlarge my knowledge about the Swiss National Park (SNP) which has its Information centre in Zernez.

I left Scuol later than I planned and I took the narrow gauge train of the Rhaetian Railway, here affectionately called “the Little Red One“, to Zernez. One of the advantages of staying in Hotel Altana or in 11 other hotels in and around Scuol – and not only from the financial point of view, but certainly also from the point of view of sustainability – is that the guests are getting a pass for free public transportation in the region of the Lower Engadin, Samnaun und the Müstair Valley: Engadin Mobil. I always enjoy it and put it to good use.

At 11.15 hrs I arrived at the railway station of Zernez and I walked towards the SNP Information Centre. Much to my surprise I noticed that Zernez was the starting point of the 7th stage of the Tour de Suisse! That’s why I saw that many support cars, oversized coaches and a lot of crash barriers. At noon the cycling peloton was supposed to report near the Information Centre before lining up further down the road for the start. I took position in front of the Information Centre. There a real circus got on with a mixture of excitement with fans of all kinds, entertainment, but also of a lot of easy-going amusement, while the cyclists flocked in to check in. And guess who was standing alongside wearing a green cap of one of the main sponsors and cheering the Dutch cyclists of the Lotto-Jumbo team in Dutch “Go for it – Good luck!“, oh dear: it was me…  Steven Kruiswijk rewarded me for my enthusiasm by gently smiling at me. 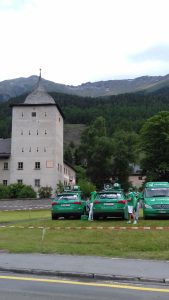 Zernez: Support cars in front of Castle Wildenberg dating from the 14th century 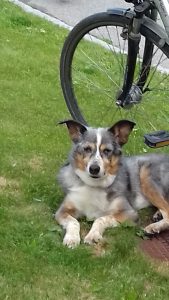 Zernez: One of the fans at the Tour de Suisse 2017 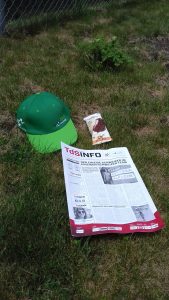 Zernez: A cap, an ice cream and the day’s program for the Tour de Suisse 2017! 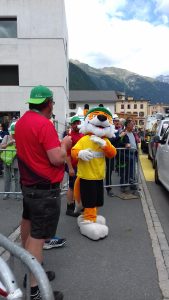 The party being over, I visited according to my original plans the Information Centre of the Swiss National Park. The National Park, founded in 1914, covers an area of 170,3 km2 (17.030 hectares) is situated between the Lower Engadin (Scuol – Zernez – S-chanf) and the Müstair Valley. Hiking on the latest two stages of the Via Alpina I walked past the eastern boundaries of the National Park. Although about 20 hiking routes are criss-crossing the National Park, it is strictly forbidden to enter the other areas. In 2008 the Information Centre re-opened in a modern building with a lot of multimedia possibilities. On three extra large screens marvellous pictures are shown that were taken in the National Park during all seasons. What a treat! The information provided in the other exposition areas, e.i. about the prehistoric inhabitants of this region, proved to be interesting, especially because of the use of the audio guide.

Zernez: impression of the Visitors’ Centre of the Swiss National Park
www.nationalpark.ch

I left timely for Scuol though, because at half o’clock I was going to meet Monika D. from Zürich. We have met in July 2015 in Scuol when we both were attending a course of the Rhaetian-roman language Vallader here in Scuol. By now we have become quite good friends. This “cuors intensif de Vallader” is a five-day course, organized by the Lia Rumantscha and is held at the end of July in the school building of Scuol. Within five weeks the next course will take place: then Monika and I (and hopefully more of our classmates from last year) will be passing on to the third class! She and her husband Olivier have an small apartment in Scuol, so they are able to come regularly to Scuol. We met at Hotel Belvédère to have a glass of wine. The lounge – also accessible for outsiders – provides fantastic views over the valley. 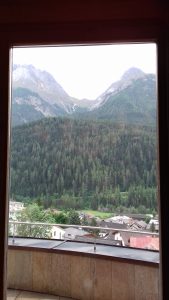 We sipped a delicious RieslingxSylvaner, a white wine from Malans in the Swiss Rhine Valley near Landquart, an area with a climate that is very favourable for producing wine. We caught up and made plans for a hike tomorrow in the mountains around Scuol.