From Weisstannen to Elm, but not by foot…

This morning I got on the bus in Weisstannen to go to Sargans, from where I took the train and a bus to my next destination, Elm. I felt slightly as if I was skipping class: the nice, fresh and autumnal weather was excellent for hiking…

At noon I arrived in Elm, an old town in the Canton Glarus on the banks of the river Sernf. It has a beautiful and well preserved historical centre, dating from the 16th century. I quickly found my hotel: Gasthaus Segnes. I instantly knew that I would feel at home for the coming days! From my window I have a wonderful view over the town and the high mountain range of the Wold heritage site Sardona (on which information will follow). 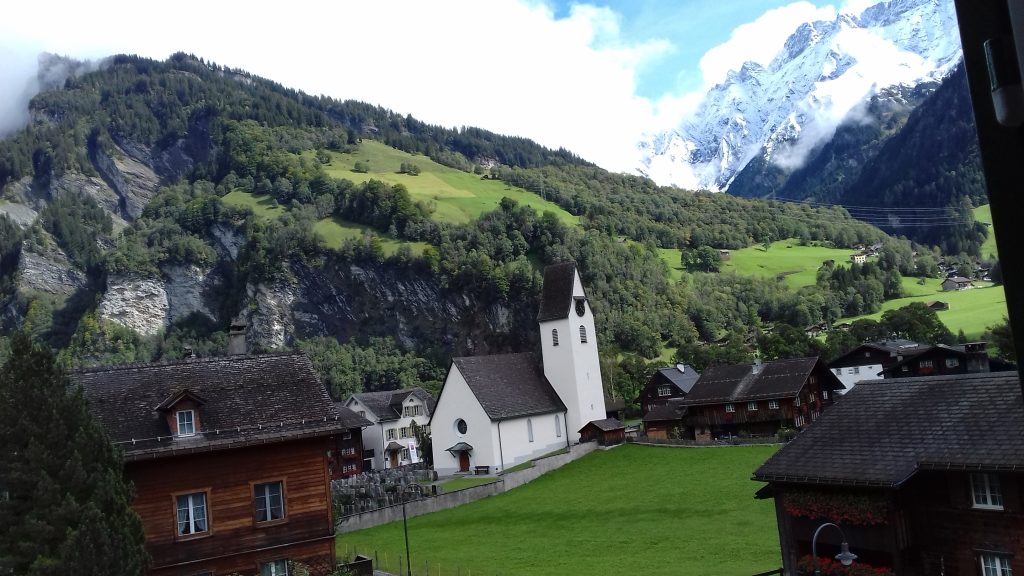 Elm: view from my hotel window on the church

The weather was still sunny and with an autumnal freshness, so I set off for a sightseeing tour in the town and the surroundings. The area is also known for the geological phenomenon of the Glarus Thrust (in German Glarner Hauptüberschiebung). Since June 2008 the area is part of the World heritage site “Tektonikarena Sardona”. The Glarus Thrust in a nutshell: layers of Verrucano rock (compressed sand from a desert area with a lot of volcanic activity around the Equator) dating from about 300 million years ago, has been carried along with the African tectonic plate and pushed to the surface by the forces released by the collision of this plate with the European tectonic plate and has been thrusted over a layer of much younger rock (dating from about 50 million years ago). This phenomenon is visible more clearly in this area of Switzerland than in other parts of the world. This Verrucano rock of a purple-greyish colour can also be found in large quantities in the Weisstannen Valley and is also known as Melser Platte. It is used as pavement (i.e. in the garden of the Museum Post-ab! in Weistannen). If I had hiked Stage 3b from Weisstannen to Elm, I would have seen this Thrust with my own eyes!

Since 2014 a special “monument”, formed by nature, is placed in the town centre: it is a large piece of Verrucano rock, polished by the water and pebbles in the river Sernf, that looks a bit like a horse’s head. That is why it is called “Martinsrössli” (“Martin’s little horse”). It has been found near the town of Schwanden, at the location where the Sernf flows into the river Linth. 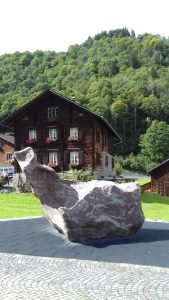 Walking further away from the town I had a beautiful view on the (snow-covered) peaks of the mountains to the east of Elm. 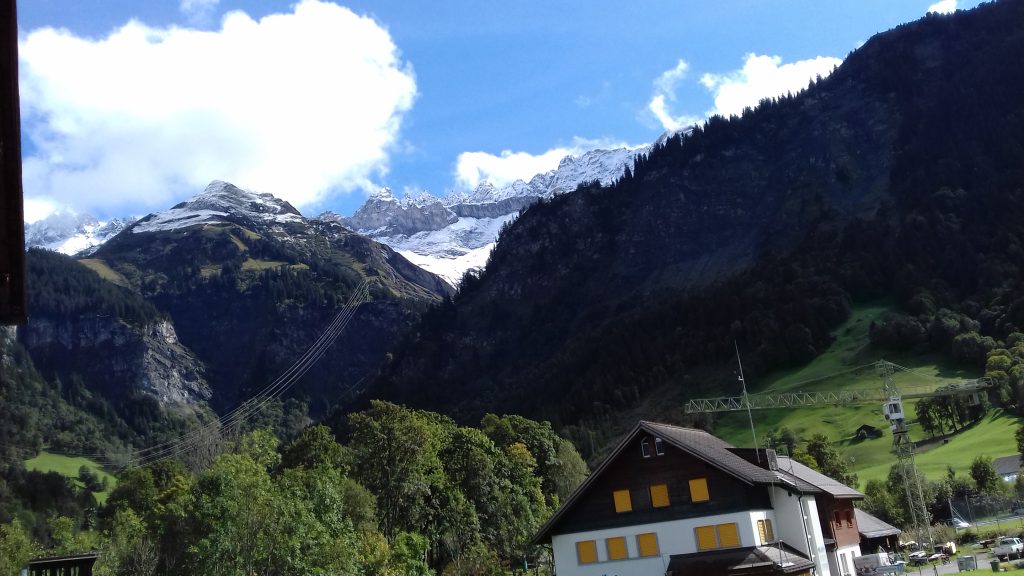 Elm: View on the impressive mountain range to the east of the village

The scenery around Elm is lush with green meadows, old trees and a lot of fast running streams, flowing into the Sernf. It is wonderful here. 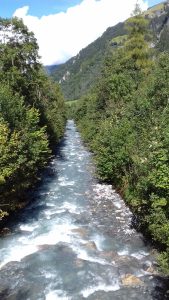 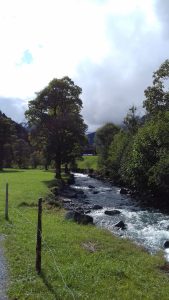 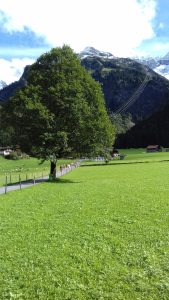 Elm: Solitary maple tree in the meadows to the east of the village

The sun was shining abundantly and the visibility was excellent – these pictures are the result! 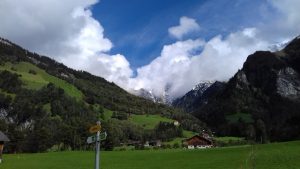 Landscape to the east of Elm 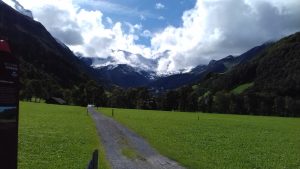 Elm: View on the mountain Hausstock at the beginning of the valley

Continuing along the Sernf I suddenly heard quite a lot of barking by over seven dogs, some young and other older, of the (Italian) breed Maremmano Abruzze,  mountain dogs which are capable of herding flocks of sheep by themselves. The sheep in this meadow did not have any reason to feel threatened! In Switzerland there is a lot of interest in this breed of sheepdogs, especially because there have been sightings of bears and also wolfs and lynx in the mountains. There is an organisation which is engaged in the protection of flocks: the “Herdenschutz“. This pack of dogs was quite a sight! 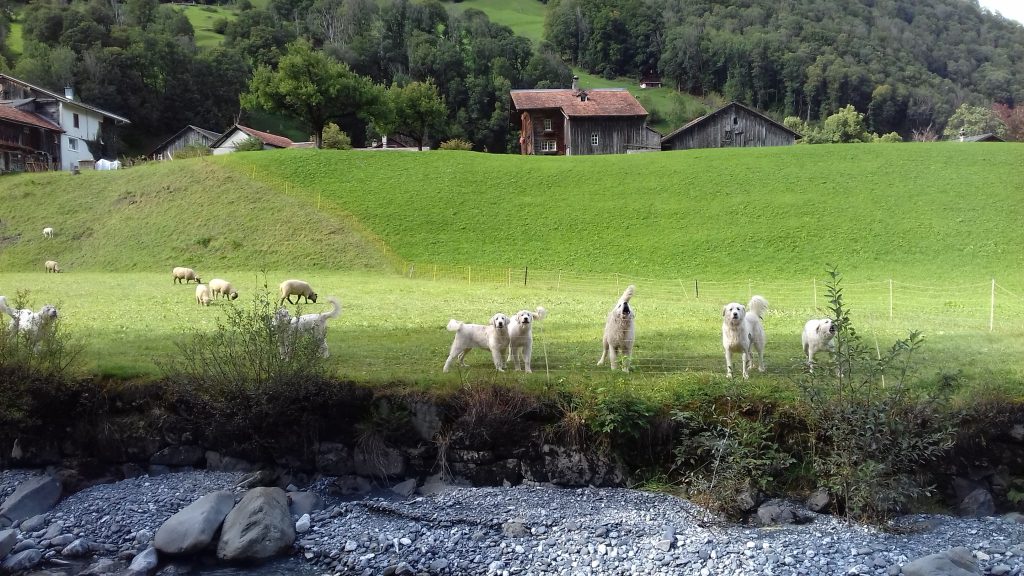 Elm: A small flock of sheep and a large pack of Maremmano-Abruzzese Sheepdogs

In the evening, after a tasty meal in the really nice restaurant Gasthaus Sonne, a bit further down the mainstreet, I made  some preparations for tomorrow: I am planning to hike the first part of Stage C4, from Elm to the Skihut Obererbs!