Gorizia and the First World War

The First World War in and around Gorizia – 100 years ago…

On my last day in Gorizia I took the tome to visit the Museo della Grande Guerra, that is situated since 1990 in two annexes on the hill of the Castello: the Case Dornberg e Tasso.

But first I went to see the Cathedral, that stand near the Piazza S. Antonio and is dedicated to the SS. Ilario e Taziano (Hilarius of Aquilea and his deacon Tatianus, two early Christian martyrs). This church has been mentioned for the first time in 1296 and has been enlarged and adapted in later centuries. The sound of the bells is very nice: from my hotel room I have heard them many times. 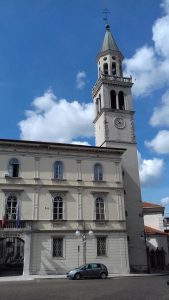 Gorizia: the tower of the Cathedral dating from the 13th century 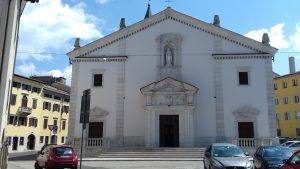 Gorizia: the façade of the Cathedral

Also this interior is wonderful… 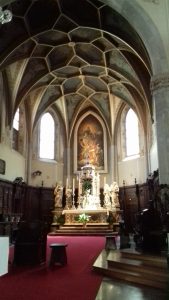 Gorizia: the choir and the altar in the Cathedral 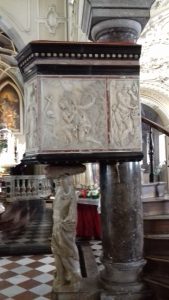 Gorizia: detail of the pulpit in the Cathedral

Later I walked uphill to the Castello on my way to the museum. Today the entrance was for free. There were a lot of visitors – the more they learned from the exhibition, the more they grew silent and sad. That happened to me as well – I found it very compelling. Most Dutch people are familiar with the history of the trench war in Western Flanders and Northern France and the enormous devastations caused by the war in those areas. Here in this part of Southern Europe the history and the devastations were comparable… Here Italians and Austrians fought against each other, from trenches that actually were dug through the town. On both sides the soldiers knew the same misery of cold, heat, vermin, loss of comrades…

In the Museum a trench has been reconstructed: one can walk through it and see sharp flashes of light and hear loud gun- and cannon shots. It reminded me strongly of the “Airborne Experience” in the Airborne Museum in Oosterbeek on the Battle of Arnhem in September 1944 and the impact it has when one walks through it – here as well as in Oosterbeek the visitor can easily leave the setting…

An impression of the trench in the Museo della Grande Guerra, as well as a desolate scene of a battlefield from the First World War: 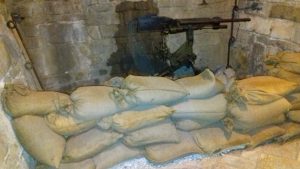 Gorizia: a set-up for a machine gun in the trenches during the First World War 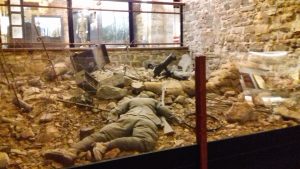 Gorizia: View on a battlefield during World War I 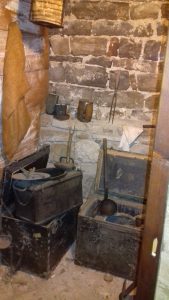 Gorizia: a field kitchen in the trenches at display in the WW I Museum

During the First World War automatic weapons were introduced which were the absolute nightmare for the troops in the trenches. Also the initial hope for a speedy end to the war diminished and – especially in 1917 – many felt despondent and desperate. The eastern front was divided; in many European cities manifestations, protesting against war were organised. For Italy 1917 also was the year of the last, stone-hard counterattack at the Isonzo river, where the Austrians and Germans finally weren’t able to break through the Italian frontlines.

In the Museum is also a preliminary draft from 1916 for a beautiful, intrusive statue of a mourning Christ ‒ “Pietas” ‒ made by Alfonso Carciani (1893‒1955) from the neighbouring village of Brazzano near Cormòns. To me the statue made of white gypsum shows on one hand serenity, but on the other hand also complete despair mixed with disbelief about the extent to which people inflict misery on each other… 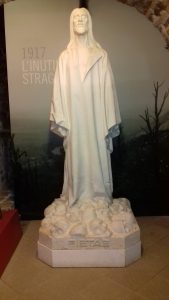 Gorizia: an unfinished statue of Christ by Alfonso Canciani from 1916 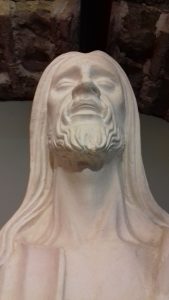 Gorizia: detail of the statue of Christ by Alfonso Canciani

After the Armistice of 1918 the town and the surroundings were left in ruins. However most civilians had been staying in town during the war. The painstaking period of reconstruction could begin. In the Museum is a portrait of a Madonna with Child, riddled with bullets; there are also many pictures in sepia on which the extent of the devastations is clearly visible, among which a picture of the “Palazzo Strassoldo”, nowadays the hotel where I am staying. 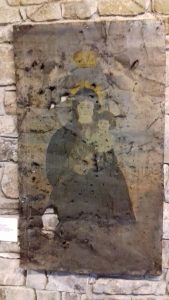 Gorizia: a picture of the Holy Mary with Child – with bullet holes after the First World War 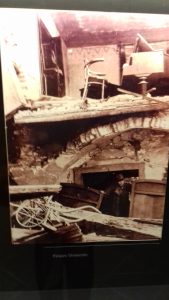 Gorizia: the ruins of the “Palazzo Strassoldo”, nowadays Grand’Hotel Entourage, after the First World War

On a memorial in town that I saw yesterday when I was on my way to the Isonzo river as well as on the English translation of the texts in the Museum bare figures are mentioned, giving a disconcerting picture…. The memorial in the park mentions the fallen since 1848, the First Independency War; the lists in the Museum relate to the loss of lives to all parties in the conflict, and also on the monetary losses. 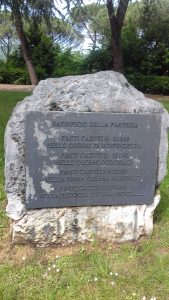 Gorizia: memorial with some figures indicating the number of fallen since 1848 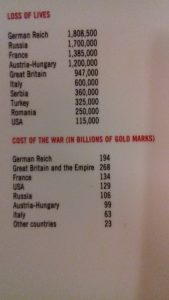 Gorizia: dry numbers on the fallen during and the financial losses after the First World War

After an afternoon with thunderstorms, including hail and heavy rainshowers I decided to go for a farewell drink in one of the bars at the other side of the Piazza S. Antonio, Il Giardino dei Vizi di Loviscek Lorenzo. The sun was shining again. From the Museum I had noticed how close by the square is to the Castello: I had a clear view on this row of white buildings. 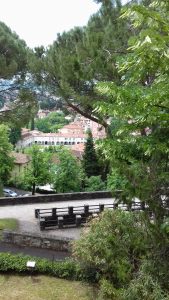 Gorizia: view from the WW I Museum on the S. Antonio square near the Hotel

There was a cheerful crowd. This time I chose a glass of Ribolla gialla without bubbles – but after all I prefer this wine with bubbles… It made a nice closure to this journey to Italy, where I travelled along a lot of “Via” in the meaning of stages, but where I saw relatively little real “Alpina” in the meaning of mountains. However in the months to come many stages will follow – as I hope and expect!