Martagon lilies and a Celtic stone: a walk to Leuk

Today I achieved an interesting hike from Leukerbad by Inden and Varen to Leuk. It took me in total 5½ hours ‒ it was really worthwhile. 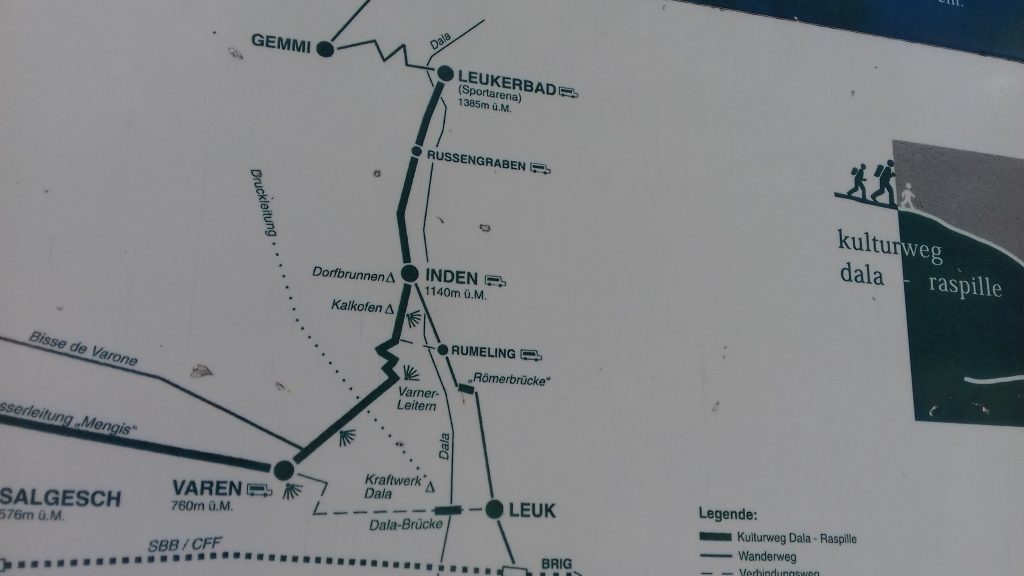 Leukerbad: the trail of the Natur- und Kulturweg Dala – Raspille

When I left Leukerbad around half past eleven, I crossed the river Dala and followed her course downstream through freshly mown meadows. The farmers were busy to tedder the hay. I saw and heard one of them climbing off his tractor and shouting something that does not need any translation: with his hay tedder he had dragged a large piece of electric fencing behind him… In a way it was his own fault: he had put the posts rather close to the road – now he has some more grass, but he has also torn the electric fence… Let us put it this way: things can happen… 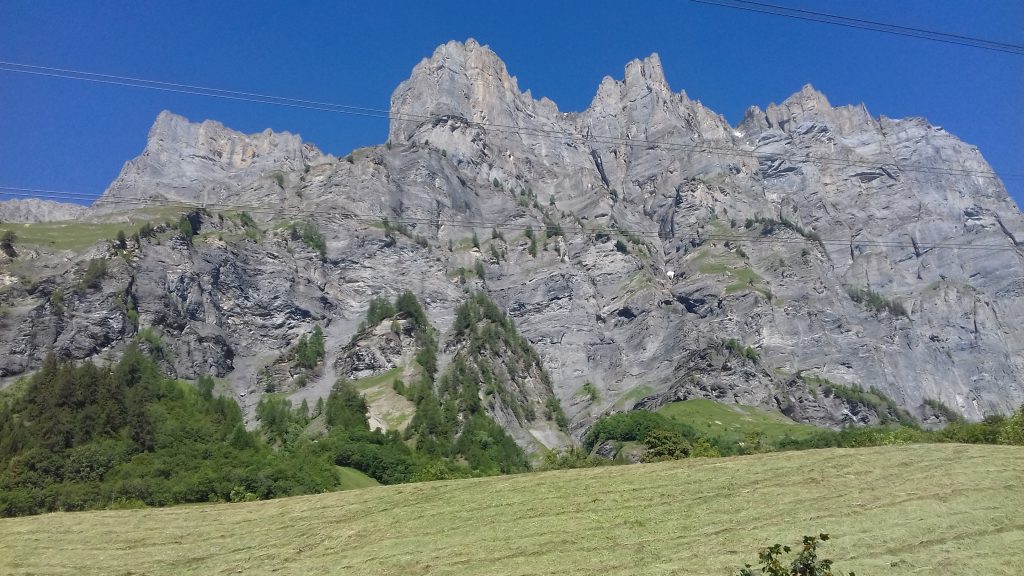 Leukerbad: the trail of the Natur- und Kulturweg Dala – Raspille

Birchen, a hamlet with some six houses, is also situated on the trail; it also has a nice chapel. From here the “Natur- und Kulturweg” (the Natural and Culture Trail) actually starts. 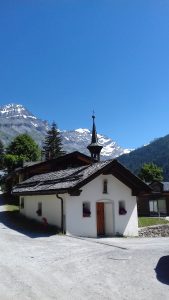 Leukerbad: the small chapel at Birchen

The view in this part of the Dala Valley are wonderful. Of course also the weather was excellent for making pictures which could be postcard-worthy… 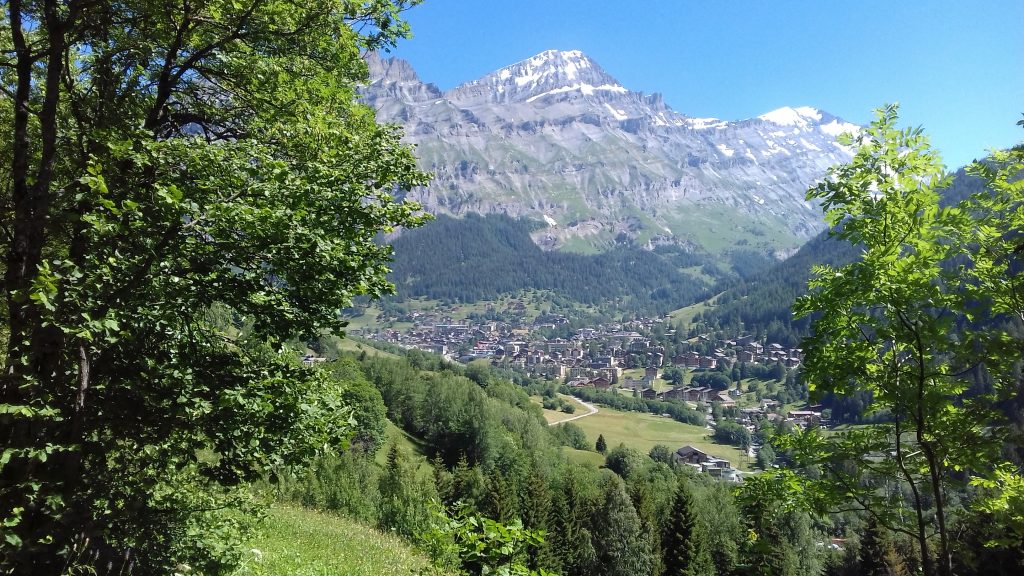 Leukerbad: really a picture for a postcard

Continuing over a mostly shadowy path I spotted much to my delight more and more Martagon lilies (Lillium martagon); a French speaking lady who walking the opposite way told me very enthusiastically  that we were just in time, because the season of blossoming was only short. I considered it the gift of the day! 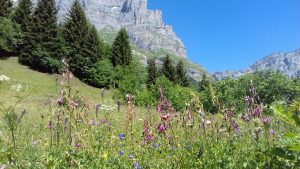 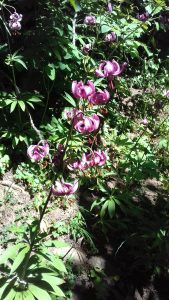 Leukerbad: close-up of a Martagon lily

Not very long afterwards a sign next to the path pointed towards the “Celtic circular stone” (Keltischer Ringstein). Along a narrow and steep path I walked down and arrived at a boulder with a sickle shaped engraving. The information  panel indicates that it is about a part of a stone which dates from the period of the New Stone Age (5200 tot 2200 BC) and which therefore one of the eldest proofs of early settlements in the Dala Valley. The stone has supposedly been used by the early settlers for cult purposes. Whether the indication “Celtic” is quite appropriate (for this period is from 500 to 50 BC) should be left undiscussed. The boulder has been notified of in 1797 as boundary stone nr. 6 between Leukerbad and Inden, in 1857 it has been researched by scientists, but in the period 1892 to 1920 blown by vandals (supposedly because of one of the legends around the stone stating that a huge treasure would be hidden underneath). The stone was thereafter considered to be missing until in 2011 a part of it was retrieved and restored. Since then both the stone and the circular engraving are listed as archaeological heritage. 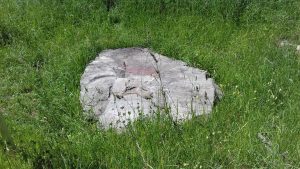 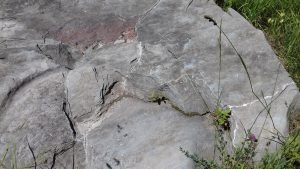 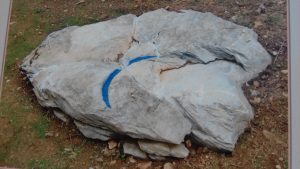 Back on the main track I walked on and arrived at a farm house where a whole collection of garden gnomes were aligned. Whoever asks himself whether these gnomes could be considered “culture” should go to Basel and visit the Museum Tinguely: there I also saw them put into two installations, the Méta-Maxi-Maxi-Utopia and the Plateau Agriculturel… 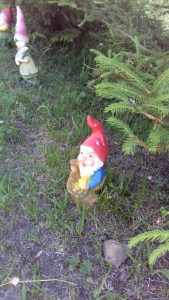 Leukerbad: garden gnome along the “Kulturweg”! 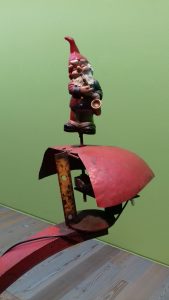 Basel: garden gnome on an installation by Jean Tinguely 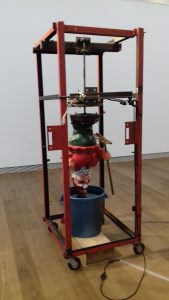 Basel: garden gnome in an installation by Jean Tinguely

Somewhere between Leukerbad and Inden another sign was posted with a lot of information on producing electricity through the water in the Dala by the KW Dala AG. Initially in 1909 the water powerplant was installed for the railway Leuk ‒ Leukerbad and for the power supply for the surrounding municipalities, but when the railway was put out of service, the importance of the powerplant even increased. The water which flows down from the mountain regions above Leukerbad falls from here with a gross discharge of 645 meters through a free fall pipeline of over 4 kilometres to a point above Varen, from where the water is transported by a pressure pipeline to the actual powerplant near the “Dalaloch” (the Dala hole) between Varen and Leuk, where the Dala flows into the Rhône. This sign is situated at the point where a overflow device is installed in order to control the flow of the water through the free fall pipeline. During my trip I would come across another points. 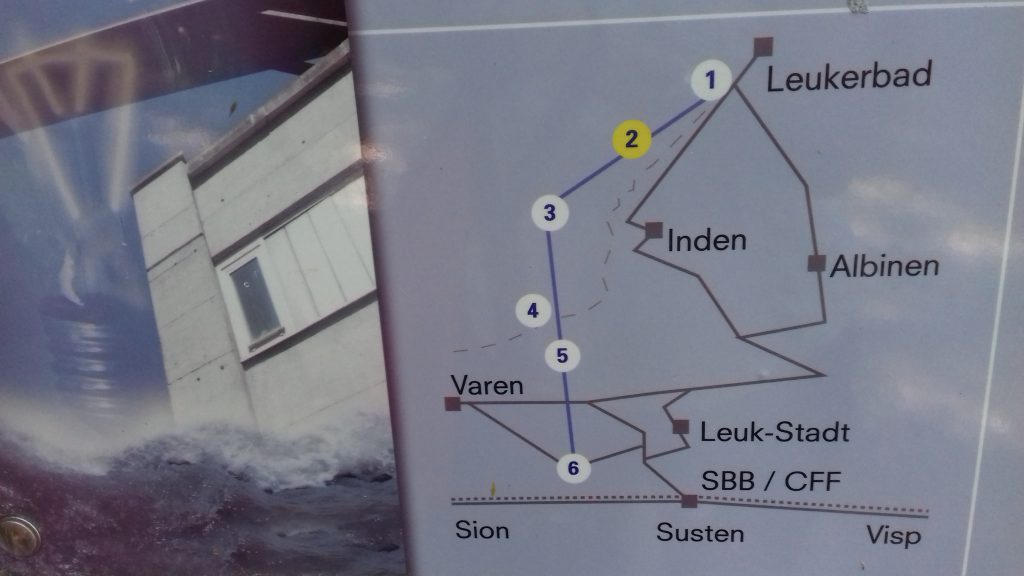 Leukerbad: Info sign with interesting points on the electricity supply in the Dala valley

The next information point near Inden was dedicated to railway history. In 1915 the railway between Leuk and Leukerbad was opened: this small track railway was construed as an adhesion railway on the more level of the line with cog wheel assistance on the steeper parts. From a point of cost efficiency the railway line partly operated on the public road. In 1967 the line was shut down, because the conditions of the material weren’t quite up to standard anymore and the road traffic was considerably increasing ‒ this would mean that large investments were required, for which no money was available. Nowadays the transportation is provided for by a bus service. To keep the memory alive there has been created an interactive footpath with information panels in and around Inden. But in the landscape traces can also be found. 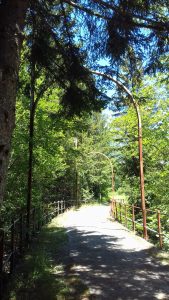 Leukerbad: on the unused track of the Leuk-Leukerbad railway some remains are still standing

Further on my way from Inden to Varen I walked over a cool forest path with a lot of shadow from old Norwegian spruces, which hadn’t proven to be quite weatherproof. Undoubtfully because of the January storms several trees were uprooted: therefore a large hole had occurred in the forest and in the road. There was only a narrow passage left… 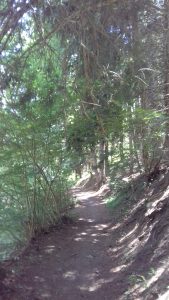 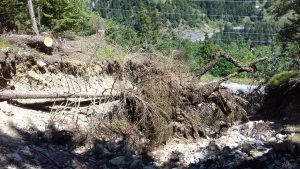 Inden: uprooted trees and landslides on the path to Varen

A next cultural item occurred: a lime kiln. According to the fire red information panel this oven has supposedly been used for the last time in the 19th century. It was rediscovered in 1996 and restored in the following years. Last year the presentation of the information has been modernised. On the info panel the process of calcination of limestone is explained: wood and calcareous rocks were abundantly available in this area, the oven was built inside the ground, so the heat of the fire is preserved. By heating the calcium dioxide and water evaporate, whereby after cooling quicklime remains. Water is added producing a muddy substance called “lime milk” (“Kalkmilch” in German), which mixed with sand and water becomes mortar and by drying construction material. 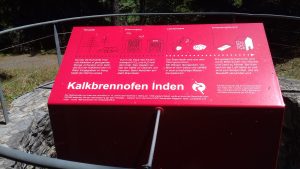 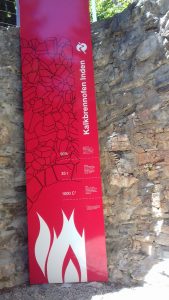 Inden: inside the restored lime kiln with additonal information

Further into the direction of Varen the overhanging rocks became more menacing… From a distance I already saw the narrow track, that seems to be glued to the rocks. Halfway the steep slope the “Varnerleitern”, the ladders to Varen, were announced, but with the warning that it was “a vertiginous passage”, for which any responsibility was declined. Actually there were (metal) ladders, going straight up against the mountain wall – thus for the intrepid. The fact that in 1779 the great German poet and writer Johann Wolfgang von Goethe really did reach Inden (and later on Leukerbad) by these ladders, does not mean that I will leave my narrow path in order to make a detour by these ladders… 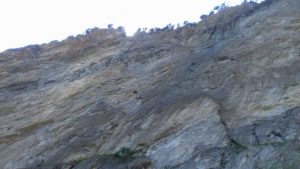 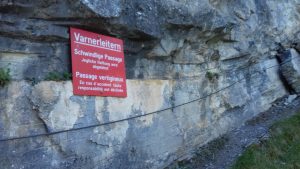 Inden: Warning sign for the ladders of the “Varnerleitern” 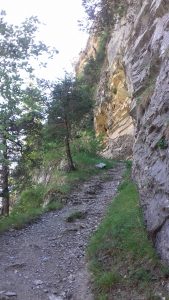 Inden: the steep path, stuck to the mountainside, towards Varen

The steep path took me to the sunny side of the Rhône Valley. Here it immediately is warmer and the vegetation almost Mediterranean. The soil is calcareous. Here I came across yet another aspect of the energy supply: an old turbine wheel, that has served for 74 years! There also was the transition from free fall pipeline to pressure pipeline. 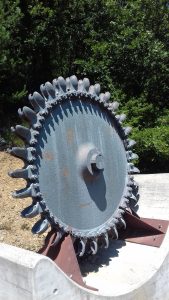 Varen: the turbine wheel of the old water powerstation

The view at this point of the route is exceptional: many vineyards lay like a patchwork blanket against the slope below me, then the fast running river, coloured white by the silt it is carrying, and more to the other side of the valley the extended Pfyn Wald, an area of “national importance” and one of the largest contiguous pine woods in the Alps, and higher up the impressive mountains! 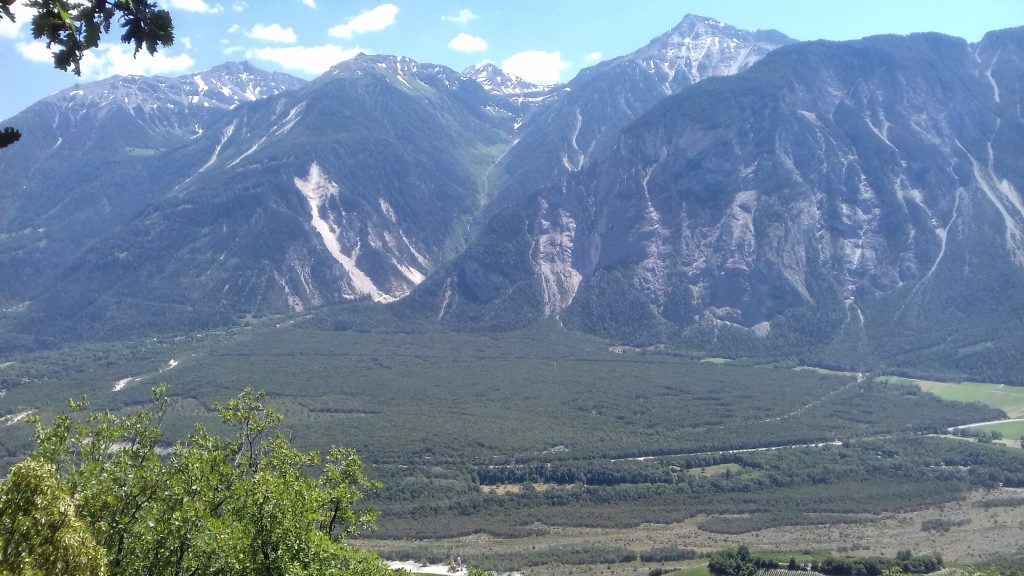 Varen: View into the Rhône Valley with the pine forest of Pfynwald

When I arrived in the small winegrowing town of Varen I decided that I would not continue to Salgesch anymore, but that I would walk to Leuk instead, through the vineyards. Immediately memories of the vineyards in the Collio to the west of Gorizia in the northeast part of Italy, which I hiked through the past month of May, started to come back. Here also are many fruit trees planted between the vines, also many cherry trees: again I enjoyed eating a lot of cherries! 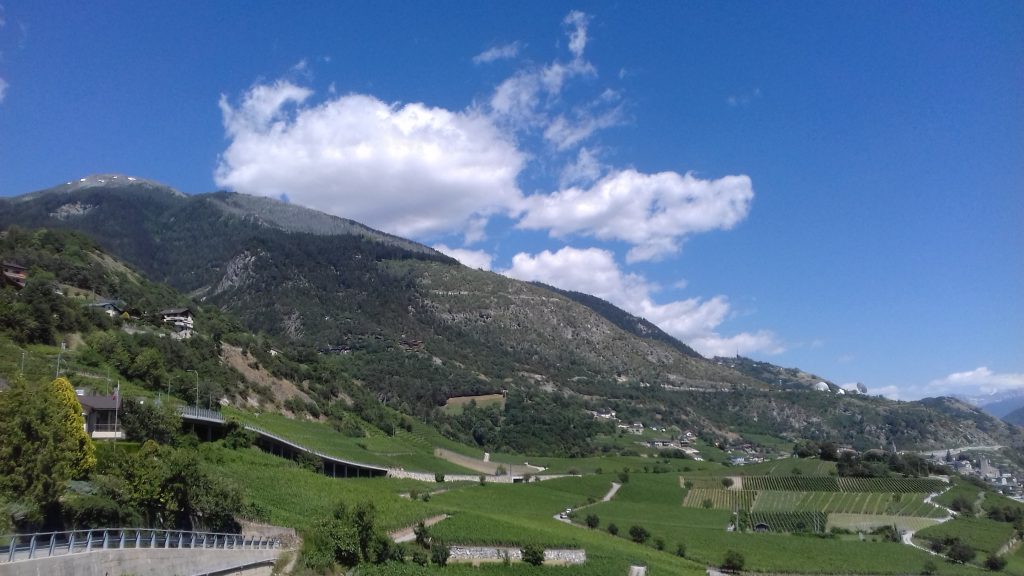 Leuk: view on the vineyards

After more than half an hour later I arrived at the spot where the Dala flows into the Rhône. Here the actual power plant is situated. There are also the railway tracks and the traffic bridge passing through the valley… At 16.00 hrs I walked into Leuk, where I drank a lot of Apfelschorle, apple juice with sparkling mineral water, followed by a nice Pinot noir from the region and some salad and a cheese sandwich, with a view on the Leuk Castle. It was a nice day with a lot of variation. 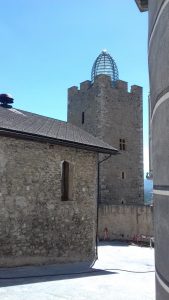 Leuk: the Tower of the Leuk Castle