Muggia: starting point of the Via Alpina

A walk through Muggia

This morning at breakfast I couldn’t believe my eyes: I have never seen so many sweet dishes at a breakfast buffet! The lemon pie is my favourite, followed by chocolate rolls… And tiny cups of very strong espresso to wake up! Strengthened by so much sugar I set off to Muggia, where the first stage of the Via Alpina starts: Muggia to the Permuda Hut. Therefore I had to take the bus, Line 20. One has to buy a ticket in advance, because that is not possible on the bus, but surely at the many little booths – one can find one on the corner of every street.

It is unlikely for Line 20 to be nominated for the most scenic route to Muggia: the bus passes through untidy suburbs, over dilapidated or just hypermodern industrial areas. Trieste is an important industrial and harbour town in this region and that is visible in everything. But once arrived in Muggia, one forgets the journey and falls for the charm of the small town with its turbulent history. Especially the history from the beginning of the Second World War makes an impression. Muggia is the only part of the territory of Istria that is given back to Italy after the Second World War with the Paris Peace Treaties of 1947. Because the parties could not agree on the division of the territory around the strategically positioned Italian town of Trieste and Koper in former Yugoslavia, they founded the Free Territory of Trieste. This territory was split up in zone A (Trieste) and zone B (around Koper in the south). Because the Free Territory proved to be unmanageable in daily life, it was abolished by the London Treaty of 1954. The territory was split up: zone A became Italian and zone B became Yugoslavian. By the Treaty of Osimo from 1975 Italy and Communist Yugoslavia declared that the division based on the Treaty of London 1954 was definitive. With the collapse of Yugoslavia Slovenia took over the obligations from the treaty – Croatia not yet, but that does not play an important role in practice, because it does not have a border with Italy. Muggia had until the midst of the 20th century a flourishing ship building industry, but she lost this position, because she was situated so close to the Iron Curtain. Nowadays tourism and pleasure craft bring revenues to the town.

In the historical centre of Muggia not only the City Hall dating from the 13th century with three Lions of Saint Marc on the façade is situated on the Piazza Marconi, but also the Cathedral of St. John and Paul. According to the information panel the Cathedral has been consecrated in 1263 by the Bishop of Trieste and has been built on a location where had been a sacred building before. The façade in Venetian-Gothic style is cladded with rectangular blocks of white stone. Above the entrance is situated a relief with the Trinity and both patron saints John and Paul kneeing on both sides. Further above is a rose window with in the middle an effigy of the Madonna with Child, supported by 16 beams of red marble and white stone. 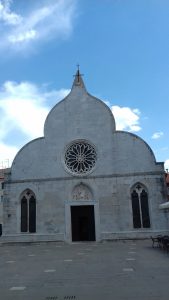 The front of the Muggia Cathedral 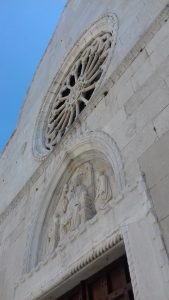 Details of the Muggia Cathedral

This is not the most well-known aspect of the church: on most images of Muggia’s Cathedral only the church tower is visible, taken from the harbour. That was where I walked to: many pleasure yachts, but also fishing boats. From the jetty not only the view on Muggia is nice, but also the view on Trieste and the mountains in the distance – especially with this light. 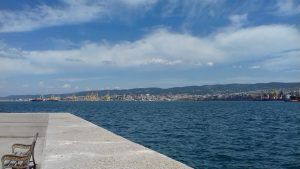 View on the harbour of Trieste und the mountains 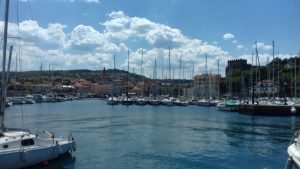 View on Muggia Harbour with Cathedral and Castello

When I walked back to the square near the Cathedral I was looking in vain for an indication where the first stage of the Via Alpina (Muggia to Premuda Hut) would start. It was almost noon and I started to feel the disadvantages of the fast sugars of breakfast. My eye was caught by the sign with the luring text “Winebar” at the Pizzeria Marconi. Apart from a salad in Greek style (with olives and feta cheese, sprinkled with thyme) and a pizza vegetariana (that was made with the usual zucchini, egg plant and tomato, but also with chopped radicchio, which just added that extra touch of bitterness) I also ordered in my best Italian “uno vino bianco regionale”. It was a Zorzettig from the Collio in Friuli, a famous wine region near Gorizia to the northwest of Trieste. Everything tasted wonderful. 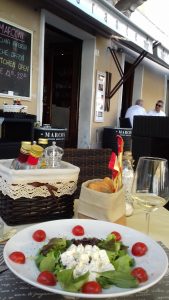 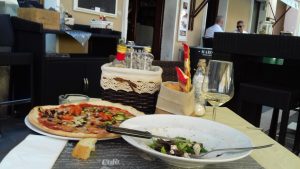 … and a pizza vegetariana – with chopped red chicory!

After this luncheon I went to the town centre and walked through narrow streets to the borough. This Castello was built in 1374 on a from military point of view strategical location: on high ground with a view over the gulf. It lost its military function since 1900: in 1991 is was bought by an artist: Villi Bossi. 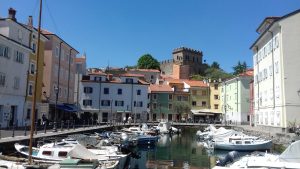 View on the Castello from Muggia Harbour 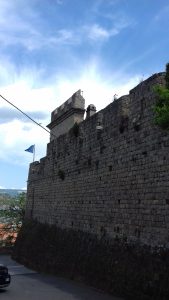 Impressive walls of the Castello in Muggia

The old town is a maze of small streets and side-alleys, each with its own character. An impression: 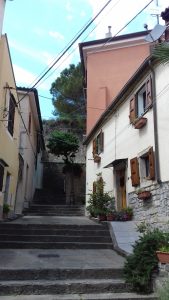 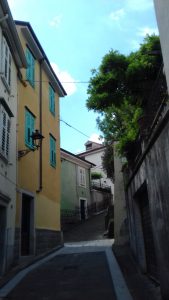 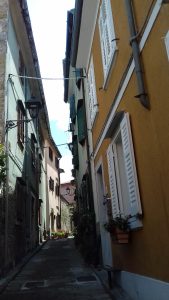 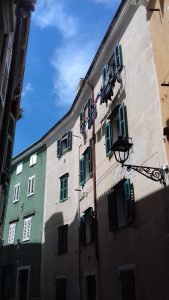 From the borough hill I followed the signs to the oldest part of Muggia, Muggia Vecchia. This area has played a role of importance already since Roman times and Muggia as an army base: the Castellum Mugliae on the mountain top. The old village, Muggia Vecchia, has been deserted still before the year 1000, because of the many pilferages: the inhabitants left for the coast, where the actual town is situated. Today Muggia Vecchia is an archaeological park. The Basilica di Santa Maria Assunta has got liturgical elements from the 8th and 9th century; it was mentioned in writing for the first time in 1203. I walked through a part of the park and around the church – and I quite liked the surroundings: very soothing! 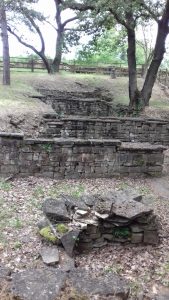 The foundations of a medieval house in Muggia Vecchia 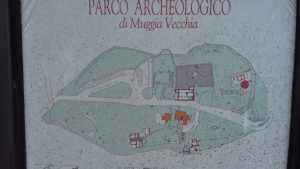 Map of the Archaeological Park in Muggia Vecchia 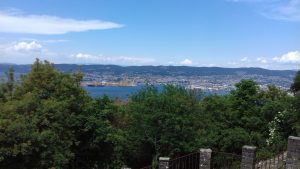 Because I knew that there also is a ferry service between Trieste and Muggia, I descended the mountain toward the harbour. It was a warm afternoon with a steadily diminishing visibility. It was pleasant to sit on the jetty, in the sun and with a cooling breeze, and to wait for the 16.45 hrs ferry. 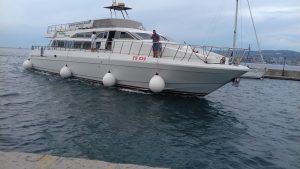 The ferry Muggia-Trieste is mooring in Muggia 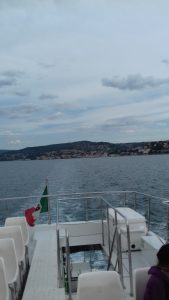 We leave Muggia swiftly behind us 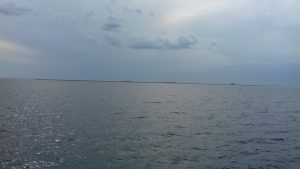 We are approaching the docklands of Trieste

From the seaside it becomes really clear to what extent Trieste is a commercial harbour city: first we saw the transhipment of coal, oil and gas, then the container terminal and the roll-on/roll-off terminal for trailers. The older buildings in the harbour dating back to the 1950s look like they could collapse at any moment, but after mooring in the passenger harbour of Trieste we got a view of the beautiful buildings and the palazzi: the city is bustling in the diffuse afternoon light.

It was a nice start of the tour, but… tomorrow we really get on with the Via Alpina!