Nature and art in and around Scuol

After my arrival last Monday I have indeed been able to enjoy the quietness and the hospitality at Hotel Altana. I still was rather active ‘though. On Wednesday, July 4th, I made again one of the walks which are my favourites when I do not want to make so much effort: from Scuol to Sur En, about a one-and-a-half hour on foot alongside the river Inn. Now the Inn gently flowed into the direction of Austria, but the situation has been quite different before. In the past years I experienced twice heavy weather in this part of the Engadin: In July 2015 and in July 2017. In both years heavy rainfalls caused massive destruction to the infrastructure around the river: little bridges over the side streams of the Inn which have been washed away, but also in the Val S-charl Valley and especially in the Clemgia Gorge, through which I have been passed on my first hike at the Via Alpina on June 12th 2017. The extent of the devastations is such that this year this beautiful gorge will be closed for hikers. The local newspaper, Engadiner Post/ Posta Ladina, recently paid a lot of attention to it, especially because the local authorities now realise the importance of this gorge as a “tourist magnet”. Researches are made on the methods how the hiking trail with its bridges and narrow footpaths can be restored in a more sustainable way: then the trail could be right for many decades to come. Not only on the financial level it causes problems, but also on the geological level: there is an enormous erosion of the steep mountain slopes upstream, so with each heavy rainfall the risks of landslides are considerable. For this problem they haven’t found a solution… Now as well the traces of erosion in the Inn valley itself are clearly visible. My walk however was pleasant. 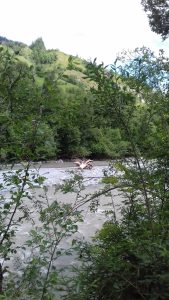 Sur En: a tree trunk has been transported by the Inn! 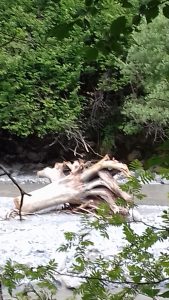 Sur En: Close-up of the tree trunk in the Inn

After a cup of coffee in Hotel Val d’Uina in Sur-En I went for a walk along the Skulpturenweg, the Sculptures’ Trail. This is a circular trail to the east of the hamlet and the camping side, where since many years statues of wood, marble or other materials are on display. One of the first spots where a piece of art is displayed, is on the middle pillar of the covered wooden bridge over the Inn, where the Postal car can just pass with careful manoeuvring. It represents Prometeus: the mythological character from Ancient Greece who stole the fire from the Gods and was therefore chained to a rock, where an eagle every day ate his liver, that grew back every night… One has to look carefully to see the statues of the man and the eagle, but it is quite impressive. 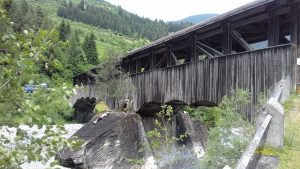 Sur En: the covered wooden bridge over the Inn 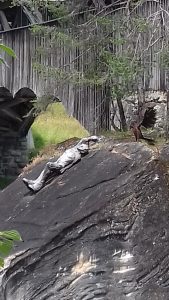 Sur En: Art – Prometeus is chained to the middle pillar of the bridge

Last winter I made this walk along the statues on the occasion of a first walk of my holiday. After the most recent Sculpturer’s symposium that takes place every year, new statues are added. The statue that I found most funny consisted of two pieces of tree trunks which were smoothly polished so the …. were clearly visible – it looked like two snuggling caterpillars – or were they fighting?  Also here the storms of last January have caused much damage: some statues didn’t suffer much, but this wasn’t the case with one of them: only a hand was left of it: a greeting of a call for help? 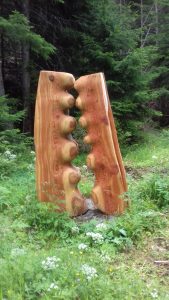 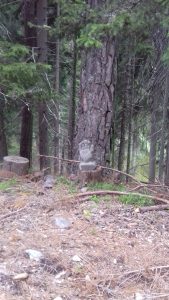 Sur En: the hand is all there is left of the piece of art…

In summer as well as in winter the interaction between nature and art has something special. I quickly found the statues that greatly appeal to me. The forest goddess Silvana from 2016, of which the artist, Stephanie Fuentes Schreiber states: “Bewaffnet mit Hörnern, schaut sie mit lieblichen Blick in sich hinein – in die Zukunft“ (Armed with horns, she looks with a gentle glance into herself – into the future). 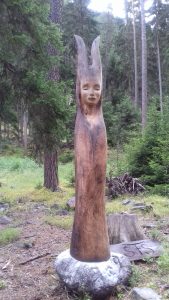 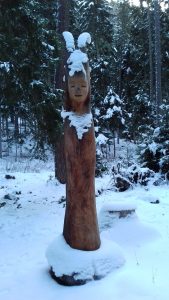 The stole made out of wood with the carved rim that is hung on a tree is also to my liking, from a distance as from close-by. The way the artist has made something as flowing like a stole out of material as inelastic as wood is fascinating to me. 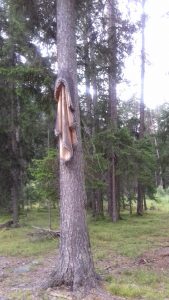 Sur En: a stole of wood wrapped around a tree (in summer) 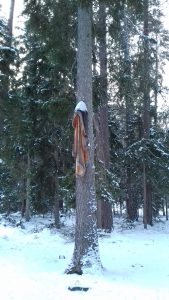 Sur En: a stole of wood wrapped around a tree (in winter) 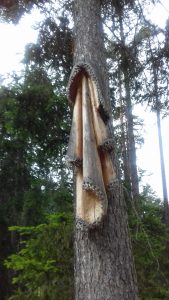 Sur En: close-up of the stole on the tree (in summer) 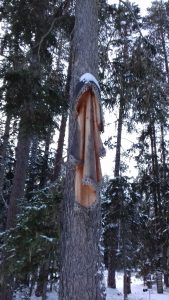 Sur En: close-up of the stole on the tree (in winter)

In 2005 the Swiss artist Urs Martin Traber created the piece of art called “Die Armen Seelen”, (the poor souls): a large collection humanlike figures, with heads made of crossties with two bore holes for eyes and one bore hole for a mouth, mounted on various redundant metal scrap. The basic idea is the representation of the anxiety and the insecurity which the transition into the new millennium would involve. In the meantime the originally bright colours have faded, giving it at least for me even a more desolate appearance. This is apparently the very purpose, but it does not very much appeal to me… When I remember Jean Tinguely’s workw, which I saw in Basel on last June 22th, then I know which I prefer! 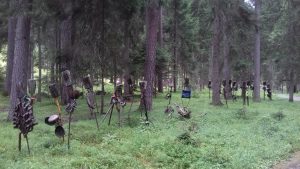 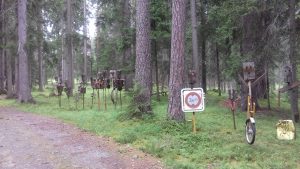 The statue I did really found very witty is that of a gigantic wooden “Man with chainsaw” which is standing on the track for many years. This time the forestry workers have added their own touch to this piece of art during the clean-up operation after the storms: they have put large stacks of cut down tree stems and tree branches nearby, as if it looks like the wooden man has been busy doing his job! 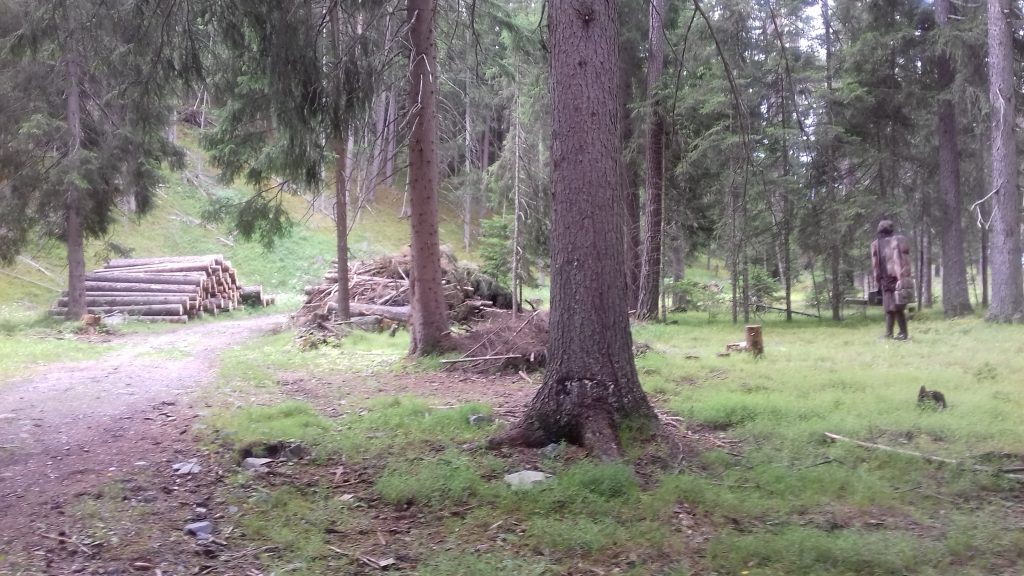 Sur En: a wooden “Man with chainsaw” and … the job done!

The weather has been slightly threatening all morning, but armed with an umbrella things would turn out right. When I left Sur En by Postal car at 14.00 hrs, the thunderstorm came down. I was sitting high and dry in the bus, which had as motto “il viadi è la destinaziun”, “the road is the destination” in Vallader. When I had returned back to Scuol, the thunderstorm drifted off into the direction of Austria. 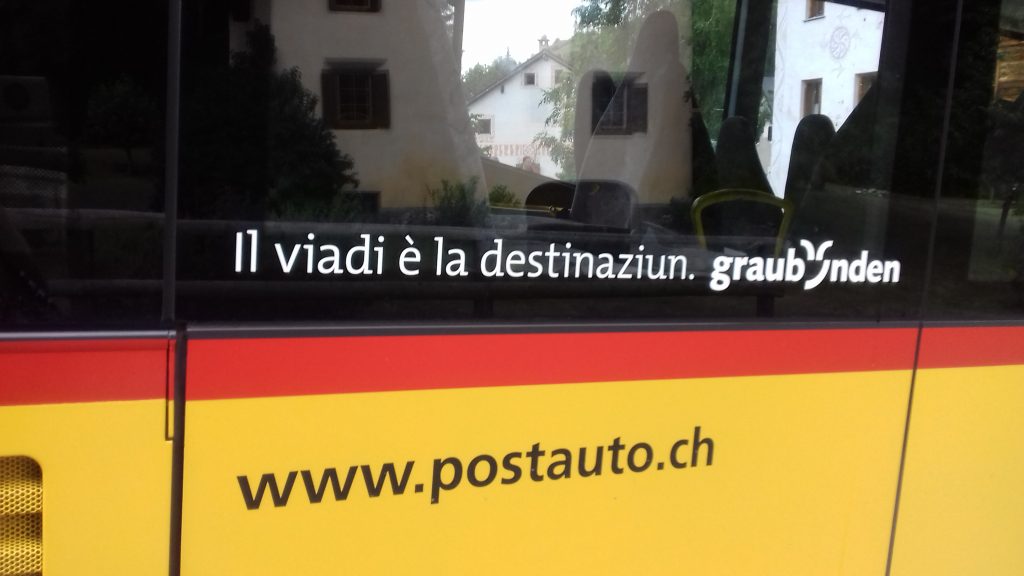 Sur En: the Postal car with the text: the road is the destination 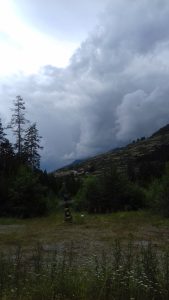 Scuol: the rain rolls in… 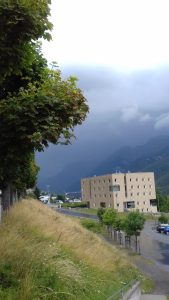 Scuol: the rain leaves for Austria!

Not only Hotel Altana has innovated, where the walls of the hotel rooms have been decorated with wonderful wall paintings, 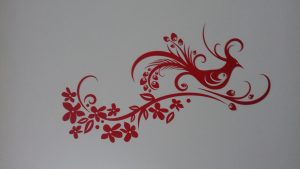 Scuol: decoration on the wall in Hotel Altana 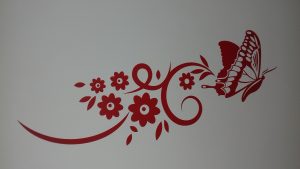 Scuol: decoration on the wall in Hotel Altana

but also the Engadin Bath has made quite a lot of adaptations. The decorations are somehow sleeker, but definitely with an eye for details. The piece of art that had formerly been put on the wall of the resting area near the main basin, has been transferred to the staircase towards the bath. It is created by the famous Engadin artist Steivan Könz, who has taken the wall painting technique of sgraffito to a very high and modern level. It was wonderful to be floating in the warm mineral water again and extremely amusing to participate in the water gymnastics! 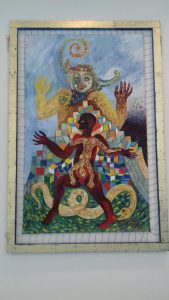 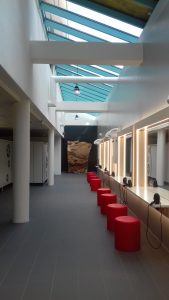 On Friday July 6th I left Scuol earlier, because I had an appointment for lunch with Monika D. of my Vallader-class. It was very nice to meet again and catch up. We had lunch in the Brasserie Federal in Zürich Main Station. This eatery dates just like the railway station itself back to 1871. Here again there was art: in cooperation with the Museum in Basel, the Fondation Beyeler, the huge station hall a beautiful structure made of crocheted cotton stripes in pastel colours had been installed, in which visitors can crawl in, without shoes, and lay down on pillows and rest. It has been created by the Brazilian artist Ernesto Neto, who gave it the title of GaiaMotherTree: he has been inspired by the many stories on the Creation and by the ideas of a Brazilian Indian tribe, of which the shamans can communicate with the plants. The towering piece of art fits in the colour scheme of the station hall and irradiates a lot of quietness in these rather hectic surroundings. 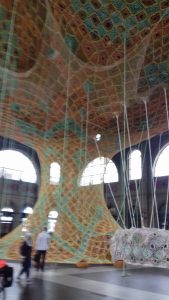 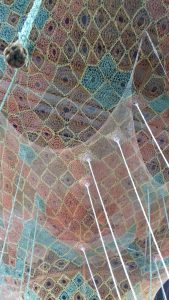 Zürich: details of the GaiaMotherTree by Ernesto Reto 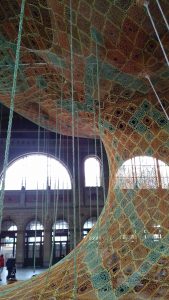 And this is how this trip ended: in the same way as it had started – with a lot of art. Furthermore I have been able to relish on much “mountains” and “nature” as well. This time it has been a feast once again!