Opicina: Stage B3 of the Yellow Trail – part 1

On my way to the bus that would take me to Opicina for the sequel of my trip I passed a special sculpture of bronze: the “Penna Alpina”. It is an homage to the “Alpini”, a unit of the Italian army, that can be deployed especially in mountainous terrain (the Alps). Recently they have been deployed in Afghanistan.
The feather is a raven feather and is traditionally worn on the felt hat of the “Alpini”. The sculpture is made by Marcello Mascherini. 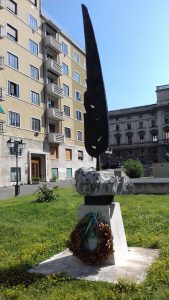 Trieste: “Penna Alpina”(war memorial for the “Alpini”, the mountain infantry)

After arriving at the Obelisk of Opicina I followed the so-called “Camminata Napoleonica”, Napoleon’s Road. Napoleon’s troops have constructed this road on their way through the Karst. Here follow some pictures with a lot of scenic atmosphere: 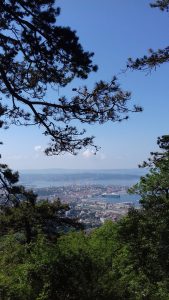 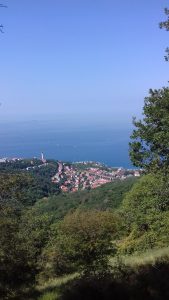 Opicina: view on the western part of Trieste 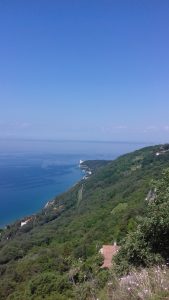 Opicina: view on the Miramare Castle

The view was breath-taking, so another sunny picture: 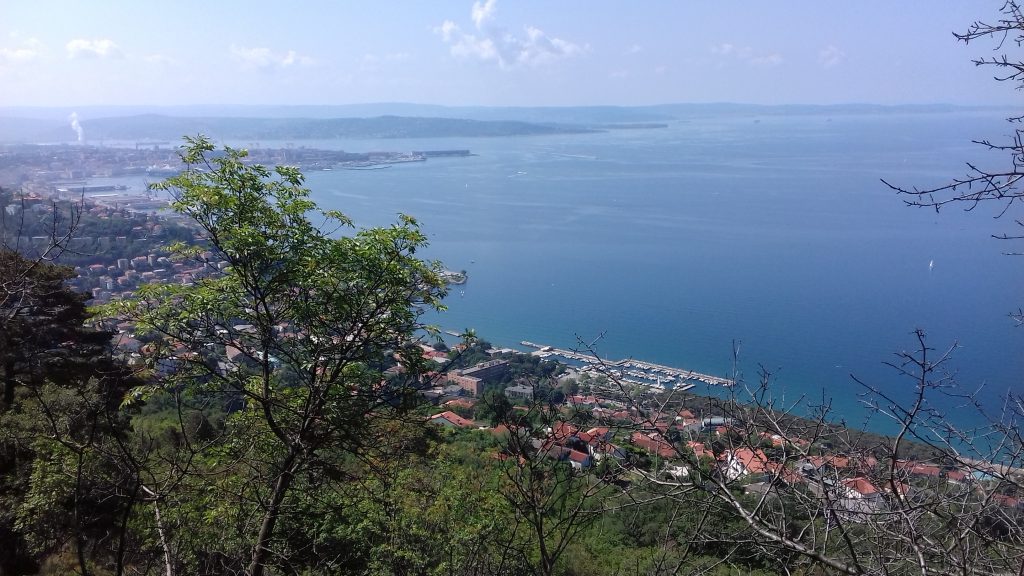 Opicina: view on the Gulf of Trieste with in the distance Croatia

A next stop on my trip is the Temple of Monte Grisa. This monumental building made of raw concrete, dates from 1966. From everywhere in Trieste the church is visible. She has been created to redeem a promise dating back to the last year of the war, 1945, made by the then archbishop of Trieste, Msgr. Antonio Santin: if the city was saved from destruction during the war, he would build a church in honour of Holy Mary. It is an impressive building: the colour of the raw concrete shows resemblance to the colour of the Karst rocks. Although the material that is used has a rather heavy specific weight, the building feels light and airy – something very special. The building itself is formed of  three triangles, moreover the building is completely constructed of triangles: a reference to the Holy Trinity. At the moment of my visit a mess was celebrated ‒ the acoustics are overwhelming and the incidence of light amazing. The general atmosphere expressed gratitude and joy: the building has been designed from the thought of gratitude and joy. 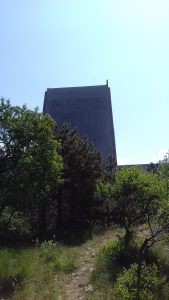 Monte Grisa: the Temple in backlight 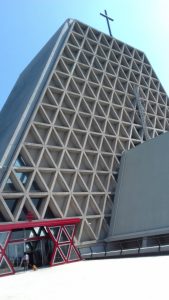 Monte Grisa: front of the Temple 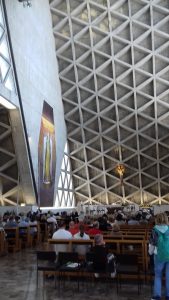 Monte Grisa: inside the church 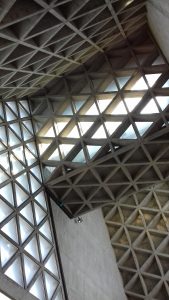 Monte Grisa: the highest roof ridge in the church 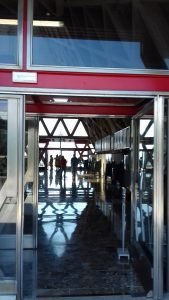 Monte Grisa: inside the church seen from the north to the south

On the square in front of the church is a sculpture in bronze of Msgr. Santin: it is made by Bruno Lucchi and inaugurated at the fiftieth anniversary of the church in 2016. The statue itself shows a lot of happiness. It was wonderful to be there in the sunshine and to be part of this atmosphere. 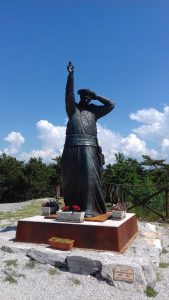 Monte Grisa: statue in bronze of Msgr Antonio Santin, founder of this church 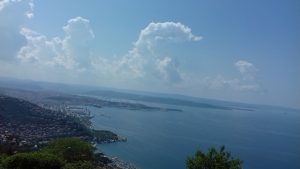 Monte Grisa: View from the forecourt of the church over the Mediterranean Sea

From there it is not far to the next village, Prosecco. I had already given up the illusion of arriving at the official final destination of this stage today: to Sistiana the distance is still 17½ kilometres… Moreover one glance at the hugely billowing clouds in the southeast made me decide to return to Trieste. During one hour I walked back on the public road with nice views. I also passed the Lighthouse of Victory (Il Faro della Vittoria). This lighthouse, with its 68 metres one of the highest in the world, was completed in 1927 and inaugurated by King Vittorio Emanuelle III of Italy. Op top of the light dome stands a statue of the winged Victory (made by Giovanni Mayer, 1836‒1946). He also made the statue of the Unknown Seafarer, with southwester and seamen’s boots. The anchor belongs to the Italian warship Audace. This beautiful memorial has a double function: it is a beacon for the ships at sea and a remembrance of the seafarers perished in that same sea… 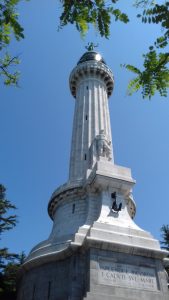 Trieste: Faro della Vittoria and a memorial for the fallen at sea during the First World War 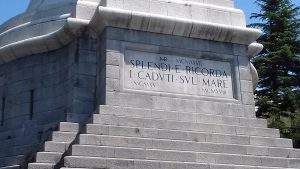 Trieste: inscription on the plinth of the Faro della Vittoria

When the thunderstorm in fact arrived, I had already reached the hotel. A refreshing spell of rain, after which I decided to go for dinner once again at Antico Panada. The past days I have been eating out somewhere else, but that had not left a lasting impression… So I settled in for an aperitive in the sun and afterwards I had a nice meal inside: a smooth marinated anchovy with parsley, orecchiette pasta with a Mediterranean sauce (olives, capers and tomatoes) and diced swordfish, followed by a generous portion of “fritto misto” of fish, all “soaked” in the house wine Friulano. In short: I could appreciate this setting! 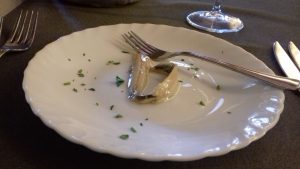 At Antico Panada: appetizer with a marinated anchovy 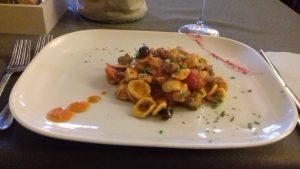 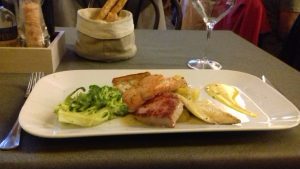 I could not linger after dinner too long, because I had bought a ticket for a concert in the nearby Teatro Miela. This is a theatre with a somewhat informal atmosphere and alternative design, founded in 1990. As a part of the Debussy year 2018 a recital of songs was scheduled for today entitled: “L’invitation au voyage”, for soprano, piano and harp. There also was a narrator with a nice voice. The pieces on the program very much appealed to me. The title is from the poem with the same name by Charles Baudelaire, put on music by Henri Duparc. Further much music by Claude Debussy and also by Gabriel Fauré and Maurice Ravel. As final piece of the evening music by Eric Satie was performed: eleven of the 21 short humoristic pieces for piano from the cycle “Sports et Divertissements”(sports and pastimes) with the projection of the original sketches by Charles Martin and commentary by the narrator. Very amusing! 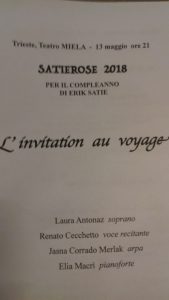 Trieste: the concert’s program at the Teatro Miela 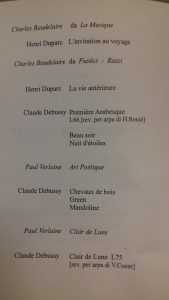 Trieste: the concert’s program with Duparc and Debussy 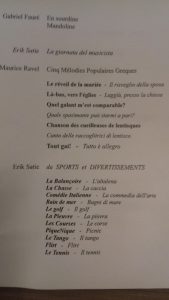 Trieste: the concert’s program with Fauré, Ravel and Satie

At half past ten the concert was over. When I walked back to my hotel in the evening twilight the temperature was still pleasantly warm and the atmosphere in town lively. I was quite happy about this day!