New discoveries in the Engadin

When I left Elm yesterday morning and travelled into the Engadin, the sun was shining abundantly. Because of the snow all mountain tops around Elm were radiating in the morning sun. 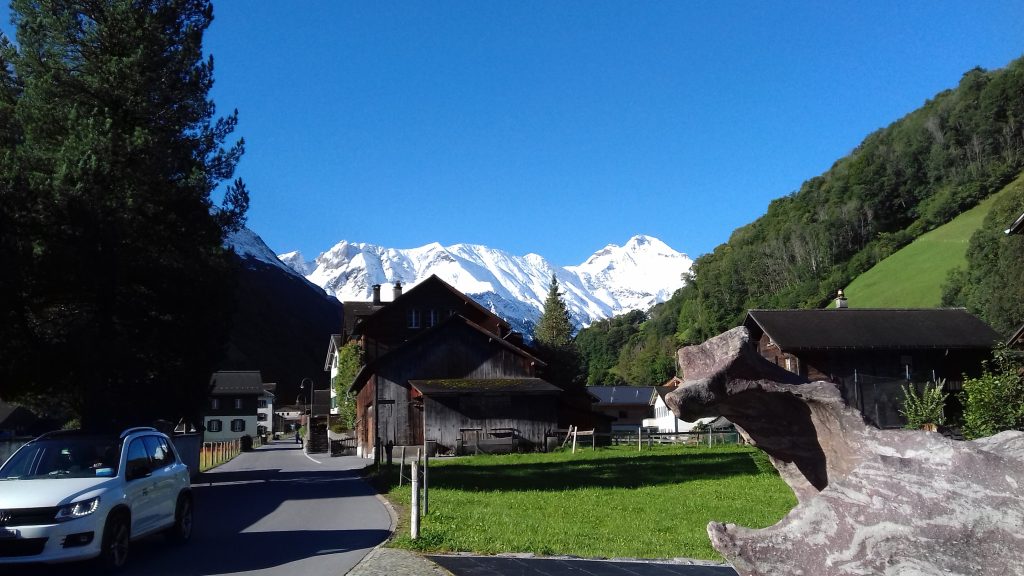 Elm: View from Elm to the south: the Hausstock (r.)

From the bus and train I could see that everybody, humans as well as animals, were enjoying the return of the sunny weather: the farmers were walking behind their mowing machines in their shirts with the sleeves rolled up, and a fox was sitting, sheltered from the wind by a few trees, comfortably warming up in the sunshine.

Arriving in Scuol I was happy to check in in Hotel Altana again and to make a tour through the village. For dinner we had a.o. “Pizokels” en my favorite, “Capuns“, on the Bündner Menü! 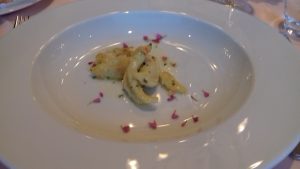 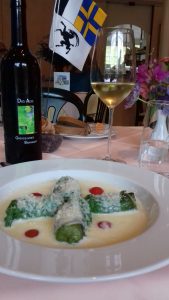 This morning I took the train to go on a trip to the village of S-chanf (in German pronounced as Scanfs), situated in the middle part of the Engadin, between Zernez and Zuoz. High up above S-chanf on a mountain shoulder, called La Sassa, are situated two interesting places: the “Menhir of Prospiz” as well as the “Botta Striera”, the remains of a settlement dating from approx. 800 A.D. That was my destination: again some magic was on the program!

As I had been in S-chanf before, in 2004 and 2005, I strolled through the old village and took some pictures from the Inn bridge. On the right side of the picture the steep footpath can be seen: that leads to the Acla Laret on the track of the Via Engiandina, the stage between Zuoz and Cinuos-chel-Brail…It was obvious that I had still to make the necessary efforts to get to these magical places! 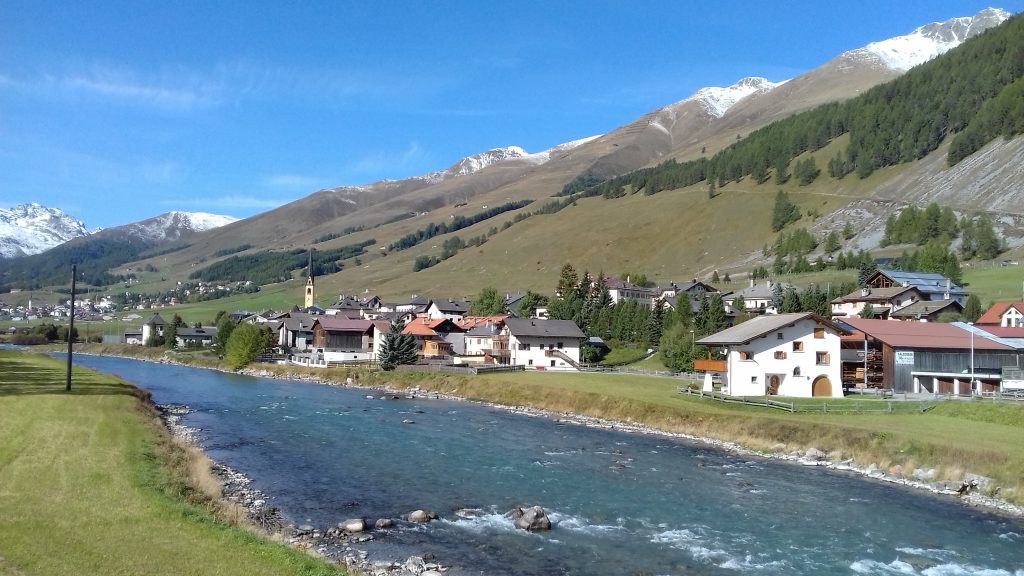 S-chanf: View on S-chanf to the west from the bridge over the Inn

Back at the railway station I started the long and steep climb towards the top of “La Sassa”. 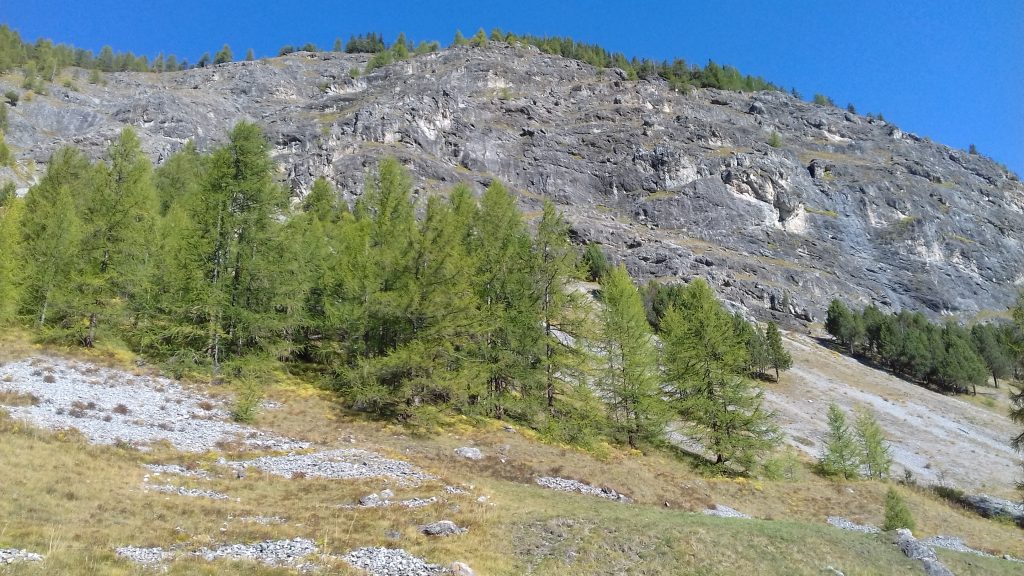 It proved to be worthwhile: on the way there were a lot of wonderful panoramic views. 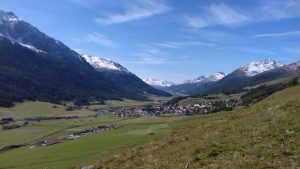 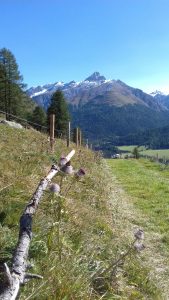 From the alpine hut with a large stable on the Acla Laret (2.001 meters) the track went on without much difference in altitude into the direction of the Menhir and the Botta Striera. The landscape had also changed, with less green vegetation and more silence. 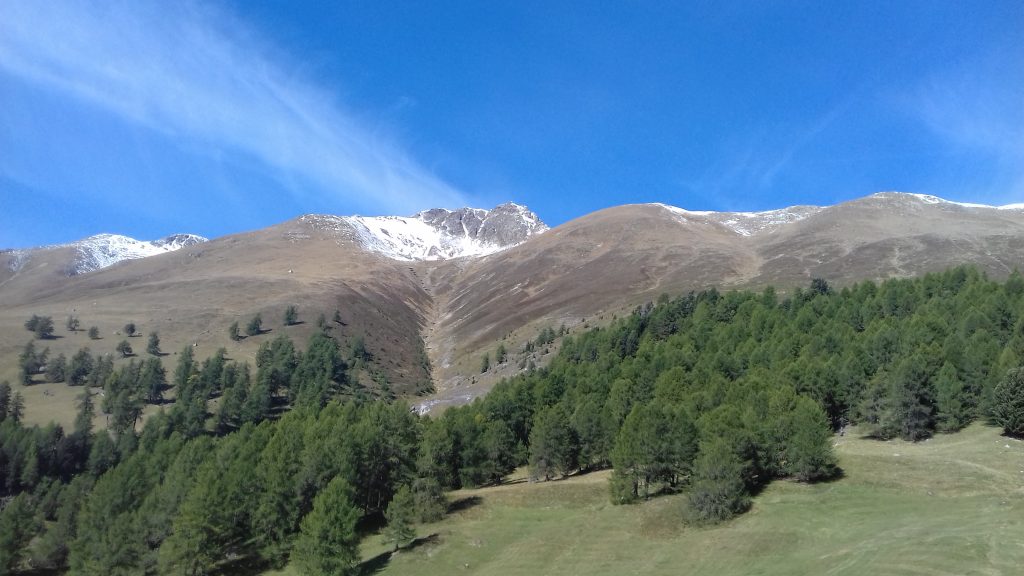 S-chanf: The view from the “Höhenweg” at Acla Laret to the north

After half an hour I arrived at the roadsign indicating to the “Menhir von Prospiz“and “La Botta Striera La Sassa, S-chanf antic“. A steep decent took me to the open vast field, called  “Prospiz” with a huge piece of rock emerging as it were from the ground and about 2,2 meters high. The boulder is situated in an exact east-west direction to the east side of the plain. On the northern side of the stone a sign is attached, providing additional information. 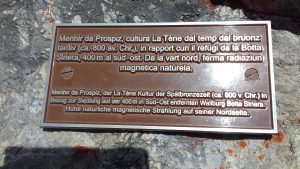 S-chanf: Information panel about the Menhir of Prospiz 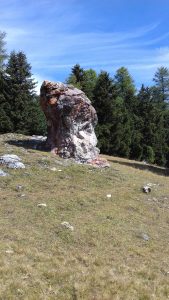 S-chanf: the “Menhir of Prospiz”

It is a extraordinary spot, high above S-chanf, where from 800 B.C. people have lived with their own culture of the La Tène period (in German the Latène Zeit). Besides what we actually know about this culture as to facts, aspects of a more esoteric kind are connected to this place. On the information panel the strong natural magnetic radiation at the northern side of the Menhir is mentioned. According to the German version of the website of Engadin/St. Moritz experts in the field of geomancy (the esoteric science exploring connections between the so-called subtile energetic reality and the physical visible reality, called in German “die Geomantie“) have discovered that the magnetic radiation of 73.000 Bovis-units (a unit of energy of life, develloped by the French scientist André Bovis) is comparable to the magnetic field of the Cathedral of Chartres. Although not everyone is convinced hereof, this place is indicated on the maps of the Swiss Confederal Aviation Board (Eidgenössisches Amt für Zivilluftfahrt) as one of the most magnetic spots in the entire country. The renowned Swiss journal, the Neue Zürcher Zeitung, published an interesting story about “energized spots” (Kraftorte). It is remarkable that in the English version of the website of Engadin/St.Moritz something is “lost in translation”, because instead of geomancy/Geomatie it is about “geomagnetism”, a field of research about the Earth’s magnetic field with an obviously more exact sciencific approach. For an enthousiastic hiker like me this all is somehow, to be honest, rather out of my league: I have just been enjoying the scenery, realizing that many generations before me have left their footprints as well… 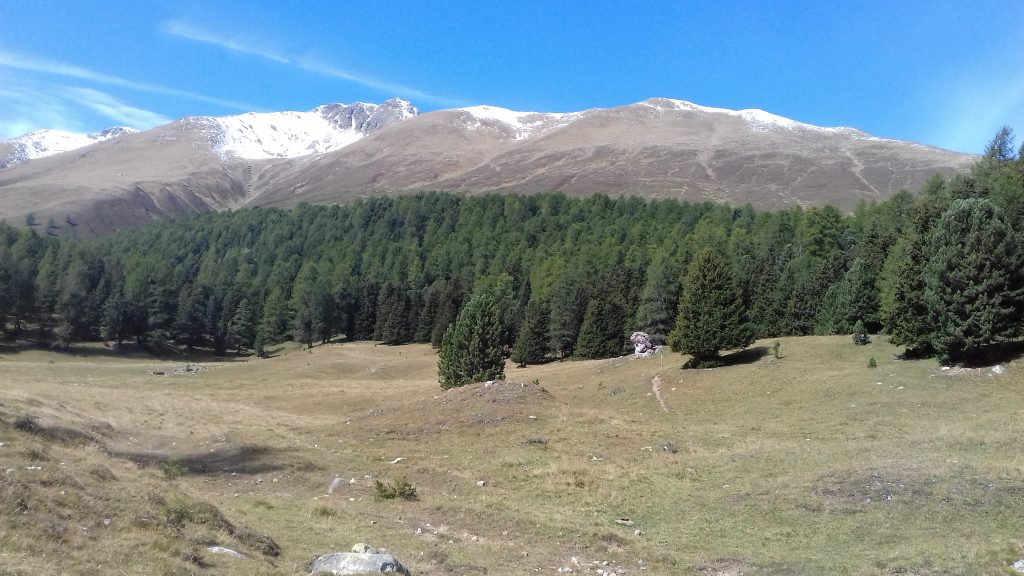 S-chanf: View on the plain of Prospiz with the Menhir

Walking from the Menhir towards La Botta Striera I spotted, much to my delight, a silver thistle (carlina acaulis); until now I have found only spent flowers that stay all year round as skeletons in the field – that also has its charm! 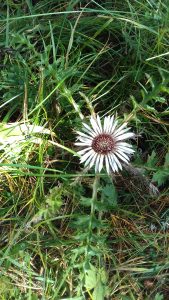 S-chanf: A silver thistle in bloom near S-chanf “antic” 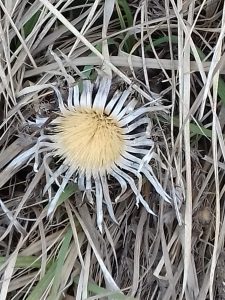 Nothing special can be noticed at the location where from 800 B.C. the settlement “La Botta Striera” was situated, except for that magnificent view over the modern village of S-chanf and the Valley. 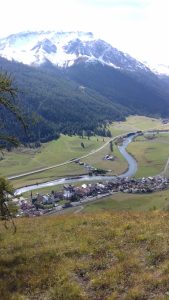 S-chanf: View from “S-chanf antic” on the “modern” village

Again a large information panel gives a situation sketch of the settlement and excavated pieces of an earthenware bowl. The forester and researcher E. Campell from Celerina in the Upper Engadin made the excavations in the years 1932 and 1933 and charted this settlement. Many of the finds are displayed in the Engadiner Museum in St. Moritz. 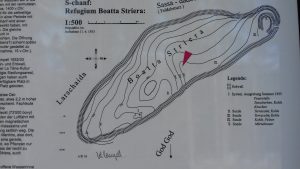 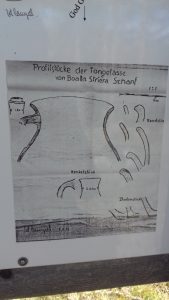 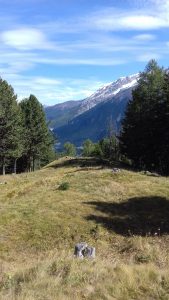 S-chanf: View of the area of La Botta Striera (to the north)

After having another look at the view I continued on my trip in the direction of the village of Cinuos-chel and the railway station Cinuos-chel-Brail. Apparently picking season for lingonberries (in German “Preiselbeere“), because I saw several people bending over tiny bushes! 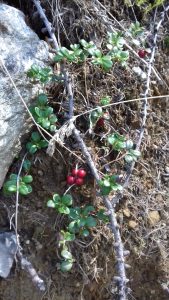 Following the Via Engiadina I passed through the hamlet Chapella with its Hospiz Chapella, dating from the late 16e century, that nowadays is used as accommodation for groups. 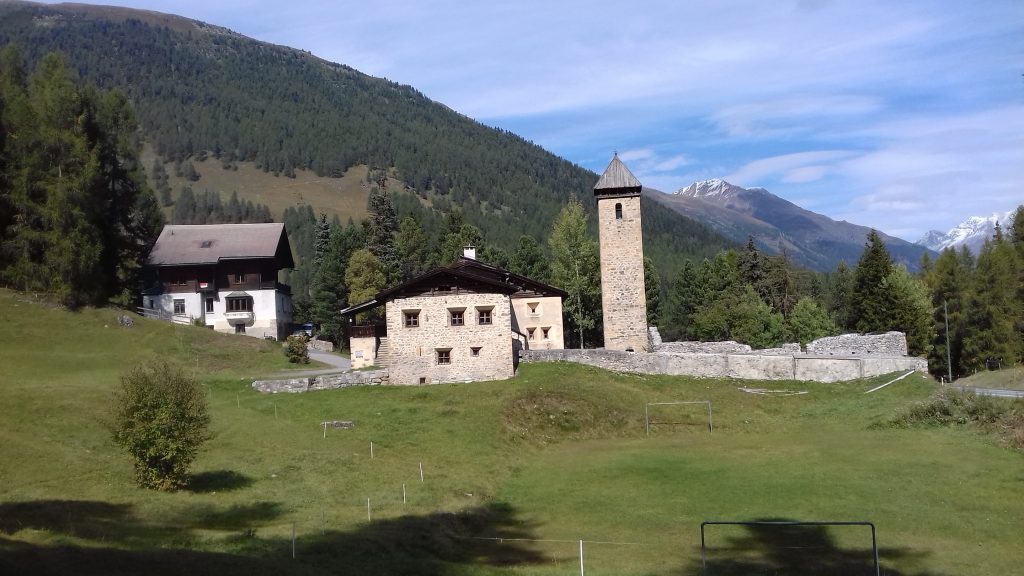 I was lucky to catch the train at the station of Cinuos-chel-Brail back to Scuol. Again it has been a special and inspiring day!