After the downpours in the morning the weather slightly recovered, so I decided to follow a trail which is in Elm indicated with the abbreviation GIW. That stands for the Glarner Industrieweg (the Glarus Industrial Trail), a trail over some 50 km through the valleys of the rivers Linth (Linthal) and Sernf (Elm), passing by Glarus towards Ziegelbrücke to the west of the Walensee Lake. Going by bike is a quick and easy way, but going by foot also is a possibility. The Canton of Glarus was one of the first areas in eastern Switzerland where industry was developing fast: in the 1740’s especially the textile industry blossomed, which would last until far into the19th century. In the 20st centry other branches of industry developed, such as mechanical engineering and chemical industry. Every era had its own style in Industrial architecture: from castle-like to modern-functional. I started with the part from Elm to Schwanden and I arrived via Matt at Engi.

In Elm the museum on the production of slate can be found, the Schiefertafelfabrik, as a living memory to the prosperous slate industry in this part of the Sernf Valley, In the mid-19th century the demand for blackboards, slates and slate-pencils grew considerably because of the implementation of the compulsatory school attendance. In the Plattenberg near Elm the locals started mining the slate. Because they worked without sufficient knowledge on mining, parts of the mountain became unstable as it was undermined. On September 11th 1881 about 17.15 hrs disaster struck: at the “Rockslide of Elm” 10 million cubic meters of rock went roaring in three charges down into the valley, covering fertile grass land, many houses and 114 persons. An information panel provides more details. Nowadays the trees on the mountain slopes have been regrown and lush grass have been covering the slopes again. The innocent passer-by will not immediately notice what has happened in 1881. 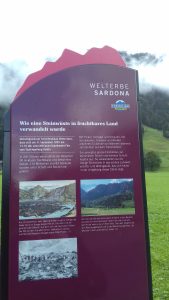 Elm: Information panel on the Elmer rockslide of 1881 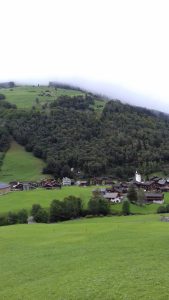 Elm: The area of the rockslide of 1881 nowaday

On the northern wall of the church in Elm a commemorating plaque has been installed, on which the names of the 114 victims are engraved. Nearly every family had lost a member – and some families had been even wiped out… 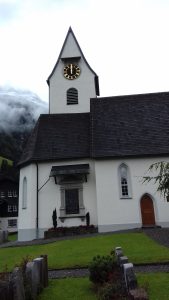 Elm: The Gothic church with the commemoration plaque 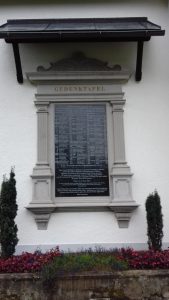 Elm: The plaque commemorating the 114 victims of the mountain slide

Downstream of Elm along the Sernf an enormous chunk of rock is laying in the middle of a meadow near the footpath, with a little plaque commemorating that disastrous rockslide of September 11th 1881. The stream of mud, rocks and debris flowed into the valley over a distance of two kilometers. There have been many rockslides in the mountains over time, mainly caused by erosion. The disaster of 1881 however has been directly caused by inappropriate and irresponsible behaviour of humans. That is food for thought! 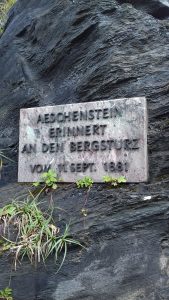 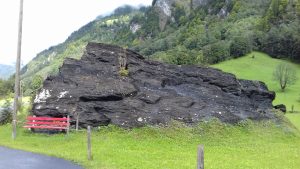 Elm: The large chunk of slate as witness of the rockslide

My trip continued further downstream along the Sernf through a green landscape with some scattered farmhouses. The autumnal sun was shining. On my way I noticed a few funny items, that to my opinion didn’t fall into the category “industrial”: a tiny house on the river bank and a road sign being swallowed by a tree… 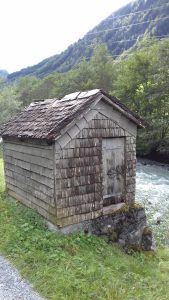 Elm: Nice little cabin along the river Sernf, for fishing? 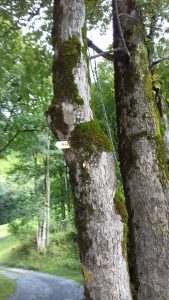 In Matt is situated the large industrial building of the former spinning mill of the “Gebrüd. R & C Spälti”. This company ceased its activities in 1947. The government took over the building and rearranged it as barrack buildings (“Truppenlager“) for the armoured divisions of the Swiss Army. The shooting range is situated at Wichlen (upstream of Elm). 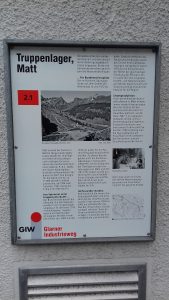 Matt: from spinning mill to army base

There are not only traces of industrial activities gone by, but also of innovative developments, such as specialized bee breeding. Along the trail this beautifully designed poster was situated, indicating that in this place protection of the European dark bee is provided. The enthousiastic lobby “IG Biene” has set its target to create in the surroundings of Glarus a safe haven for the European dark bee in order to protect this species. 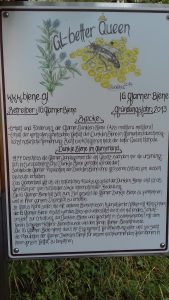 Matt: Poster for the protection of the European dark bee

The plant depicted on this poster is the blue fenugreek (Trigonella caerulea ssp. sativa). This is not only a plant much appreciated by bees, but also an essential ingredient of the so-called Schabzigerkäse (in German often shorted to Zigerkäse), giving it therewith its distinctive green colour and spicy taste. This type of cheese was already produced and marketed in the 15th century by monks of the monasteries around Glarus.

In between the villages of Matt and Engi nature is rather untouched. On the steep slopes on both sides of a beautiful cascading waterfall I spotted three chamois, watching me alertly. 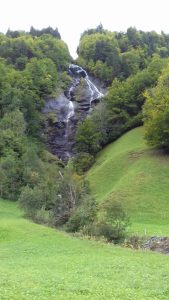 Impressive cascading waterfall between the villages of Matt and Engi

I didn’t make it to the slate factory in Engi. After a walk of about three hours I was just in time to catch the bus back to Elm. The bus stop is called “Weberei“(“weaving mill”). Nearby is situated the textile factory Weseta (“Weberei Sernftal”), which is an important employer in the valley, not only nowadays, but from 1864 into the early 20th century, when there was still a lot of poverty in the valley. Next time when I visit the area, I will certainly follow other parts of this Glarus Industrial Trail: one gets quite a picture of the entrepreneurial spirit, the perseverance and the visions for the future of (most of) the entrepreneurs through the times.

In the evening the weather was still nice as promised in the forecasts and so the day ended with a wonderful view on the mountains around Elm, “Alpenglühen” included. 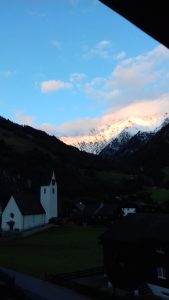 Elm: Evening glow on the mountains to the east of Elm