Prosecco: Stage B3 of the Yellow Trail – part 2 – and the Grotta Gigante

High over the coastal road and deep into the cave

Yesterday I have made another attempt to cover the remaining 17½ kilometres of Stage B3, from Prosecco to Sistiana. Therefore I started in Prosecco. The weather was covered and not as nice as the past few days. Rain had also been forecasted – but for now I could still hike in my short-sleeved shirt. In Prosecco another symbol of the Alpe Adria Trail was standing – this time a real “road sign”. 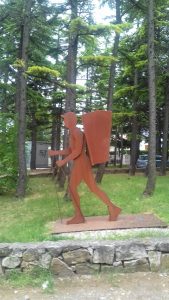 Prosecco: here another man of rusty iron is standing

The trail continued on paths through the woods, passing by caves, and over the Karst ridge with views on the now grey Adriatic Sea. By then it had started to drizzle a little. 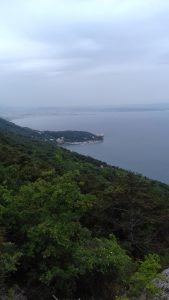 Prosecco: View from the west on the Miramare Castle 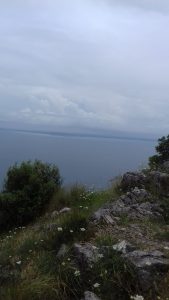 Prosecco: View on the Adriatic Sea towards Venice

Along the way I did not see any cattle, but surely an artificial pond. There were teeth marks on the trees around the water. The surface did not only move because of the rain drops, but also by the tadpoles! 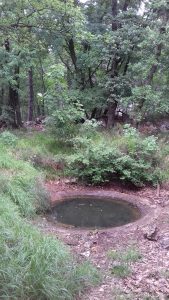 Prosecco: an artificial pond for cattle 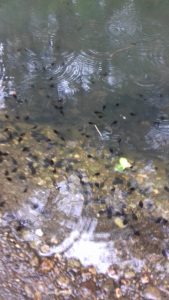 After I reached the centre of S. Croce del Carso, around noon, I unfortunately got on the public road without any indication to the scenic route. It was a pity that it started to rain quite intensely. The umbrella and sweater weren’t enough anymore: I put my jacket on and covered my rucksack… A small gift on this rainy trip was finding a Late spider orchid (Ophrys holoserica), standing proudly at the side of the road just before I walked into Aurisana. 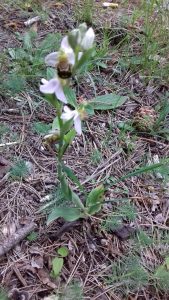 Aurisana: a Late spider orchid (Ophrys holoserica) on the side of the road

When I walked into Aurisana it was around 13.00 hrs by then and I didn’t expect the weather to improve in short notice … Today I wouldn’t be able neither to reach the final destination of this stage, Sistiana. Still about 10 kilometres to go, I decided to look for the nearest railway station to return to Trieste. It was Bivio d’Aurisana. 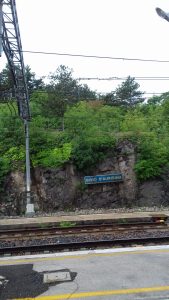 I passed the famous marble quarry Cava Romana, which already played a role of importance in Ancient times. At the grounds huge stacks of large blocks of white stone were lying lightening up in the drizzling rain. On arrival in Trieste the sun was breaking through the clouds again. This shows once more: the sun is always shining, although some rain clouds can float by.

And today the weather has considerably improved! On the day I would leave Trieste in order to go to Gorizia, the sun was shining again and it was pleasantly warm. Because I would travel by train only in the afternoon, I had time and opportunity to go to the Grotta Gigante, between Opicina and Prosecco, somewhat more towards the north, near the little village of Borgo Grotta Gigante.

It was a spectacular happening: at 10 o’clock we went from the reception building above the Grotta Gigante with its small, informative visitors centre, with a guide 500 steps down – and later on also 500 steps up. In fluent English (with an adorable Italian accent) the guide gave us an overload of information about the cave, how it was discovered and to which particularities we had to pay attention to. He told us that in 1840 an engineer went searching for extra water sources for the steadily expanding city of Trieste and thereby encountered this cave: it is about 110 meters deep and as the name already states, “gigantic”. The guide pointed at a small opening very high into the dome of the cave, through which the first explorers had descended into the cave and joked: “That is not accessible for the public!”. Only in the beginning of the 20th century more scientific research has been done. In 1922 the cave has been opened for the public. From the first moment on the whole track has been equipped with electrical lighting. It is a dry cave, that has been created because during millions of years the river Timavo has eroded the calcareous rocks. Such a process is super-slow: 1 mm every 10 to 15 years… Now it is a fossil cave – the sediments still grow, but only because of the rainwater seeping through. That could be spotted at some places: a layer of wet glazing on top of a stalagmite. There are small sharp stalactites hanging from the ceiling, stalagmites that look like a high, somewhat lopsided pile of plates, stone masses with flowery motives – a multitude of forms and colours. There are many variations in colours: greyish white is an indication of pure calcium carbonite, brown of iron, carried along by the (rain)water originating from the fertile red soil (“terra rossa”, that makes the vines growing so well!). Because there is no natural light in the cave, one could think that nothing will grow there. That proves to be incorrect: at the points of the electrical lighting green moss, small ferns etc. can be spotted – their spores have been carried along with the visitors’ clothing! The cave is not only opened for the public exclaiming “Oh and Ah”, but also serves as a scientific research centre for the University of Trieste, that scans movements in the surface of the Earth: the “earth tides” comparable with the tides of the sea (which are easier to detect), but which are both caused by the gravity of the sun and the moon. For this purpose in 1957 two large pendulums have been installed that are about 100 meters long and are attached to the ceiling of the cave. The movements of the Earth cause vibrations which are re-enforced to 40.000 times at the bottom of the pendulums. The data are transmitted by a modern glass fibre network to the computers of the University. The two pendulums don’t misfit in the cave: they look like two long, white ribbons hanging from the top of the cave. Not only earthquakes, but also the tectonic movements of the African and European earth plates are registered. In the cave the humidity of the air is very high and the temperature is constantly 11°C, a bit chilly to start with, but later on one doesn’t notice that anymore because of the many steps! Everybody was quite impressed, but also excessively occupied with taking pictures – so was I. Here an impression: 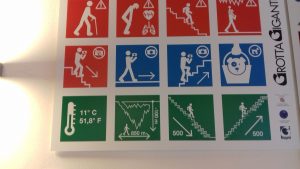 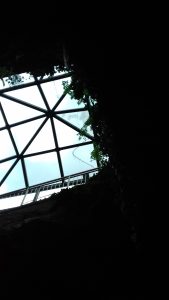 Grotta Gigante: we are going underground…! 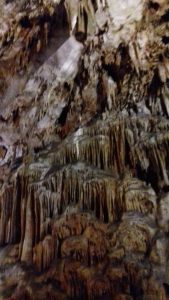 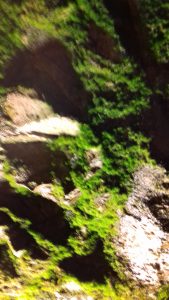 Grotta Gigante: near the lighting points some moss is growing 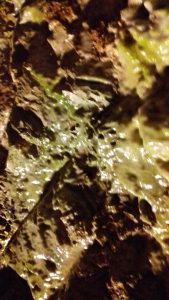 Grotta Gigante: this “green soup” will eventually change into moss 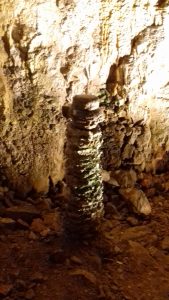 Grotta Gigante: a stalagmite looks like a high pile of dishes 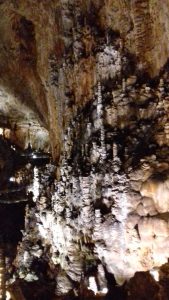 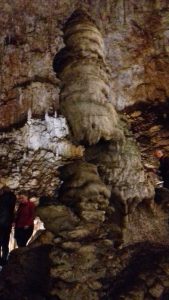 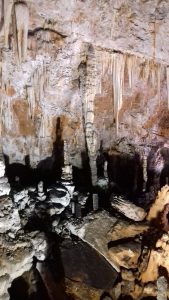 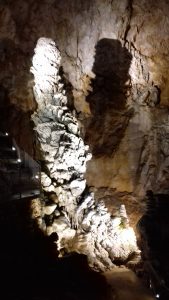 Grotta Gigante: this stalagmite is the tallest with its two metres 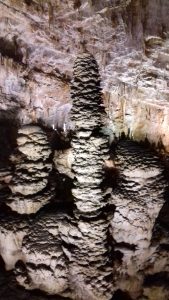 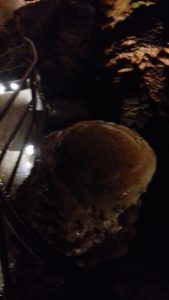 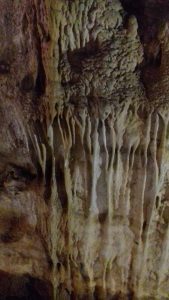 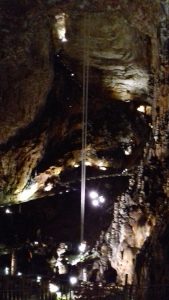 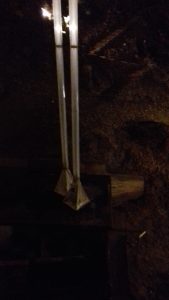 Grotta Gigante: the bottom of the pendulums with the small building for the measuring 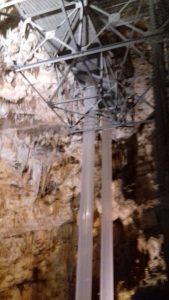 When I emerged from the cave and had wiped the sweat off my brow, it was about time to return to Trieste. So I got on the bus at the same stop as where I had got off. This Line 42 also drove “its rounds through the villages” in the hinterland of Trieste, near the Slovenian border. Before I realised that I actually could have changed to the famous Line 2 in Opicina, the bus moved on and we returned on the same track back to the Grotta Gigante and from there into the city. A tour of about an hour: it was quite interesting to see this part of the border region with all its lush green and the tranquillity (at least in these times).

I quickly had an espresso at the railway station and took the 13.27 hrs train to Gorizia. From the train I could see how enormous the terrain of the quarry Cava Romana at Bivio d’Aurisana actually was! Also from the train I spotted several items that I could have seen from  nearby if I had properly hiked on Stage B3. Does this count as “Stage accomplished”? I don’t think so: it just gives me another reason to return to Trieste once more!

After a 45 minutes journey through an ever changing landscape – with rivers! ‒ I arrived at the Gorizia railway station. My hotel has the melodious name “Grand’Hotel Entourage” and is situated in the “Palazzo Strassoldo” dating from 1440. The building has a rich history, but has been changed into a hotel in 2004. I moved into a spacious, bright room on the second floor with a nice view on the mountains in the south. 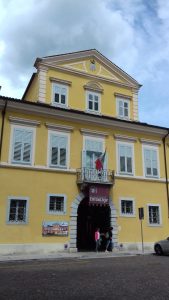 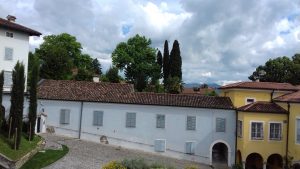 Gorizia: view from my hotel window on the mountains in the south

In the evening I went to the Enoteca, the wine bar belonging to the hotel, for a while. Here I noticed that speaking English was not an option. So I ordered with some difficulties “uno vino bianco regionale ed uno sandwich con prosciutto crudo, per favore” and got a glass of Friulano (well, actually two glasses!) and tasty bread and raw ham. I was a happy person. 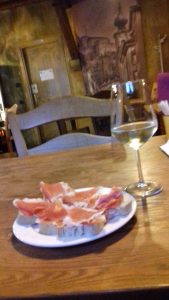 Gorizia: a glass of Friulano and a sandwich with prosciutto crudo