School and time off in Scuol

About my school week and school performances I shall be brief. The level of the 4th grade was significantly higher than that of the 3rd grade and I was hindered by a “speech block” (only in Vallader) and – to be honest – also by a lack of preparation.
Nevertheless this morning I was able to read aloud an essay of one A4 sheet about “mias aspettativas e meis giavüschs”, or about my expectations and wishes for the Rhaeto-Romanic language…. The classmates understood my story, because everybody applauded encouragingly; our teacher, Magistra Jelscha, was also pleased.

Each year a framework programme for the afternoon and evening is provided for, open to all participants. This year ‘though I wasn’t very excited about it and Monika – who was also this year in my class again – agreed with me. So we have organised our own amusing programme.

On Tuesday in the afternoon we went for an easy stroll along the river Inn to a small place near the old “Trinkhalle” near Nairs, the kiosk for drinking mineral water that dates from the 19 th century but that is closed now. It is situated deep in the Inn gorge underneath Tarasp. It was a footpath that I haven’t walked before. It is part of the “Senda d’aua minerala”, the Trail along the mineral springs, of which I followed another track last year, June 15th 2017. The coolness of the past days has changed into heat: therefore it was pleasant to be alongside the water. 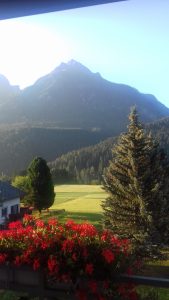 Scuol: view from my hotel room on the Piz San Jon 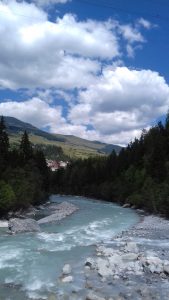 Scuol: the Inn upstream from Scuol 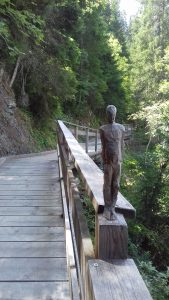 Scuol: the bridge’s post is formed into a male figurine

The Büvetta Srondraz, the new Trinkhalle looks perhaps somehow concrete-like in comparison with the old building nearby, it is wonderful to sit there – and my Johannisbeerschorle (black currant juice with sparkling water) also tasted delicious. The mineral spring, the Sfondraz, is called as such because it flows out of the steep mountain slopes which are at this location very instable: sfondrar means to sink in, to go under in Vallader. 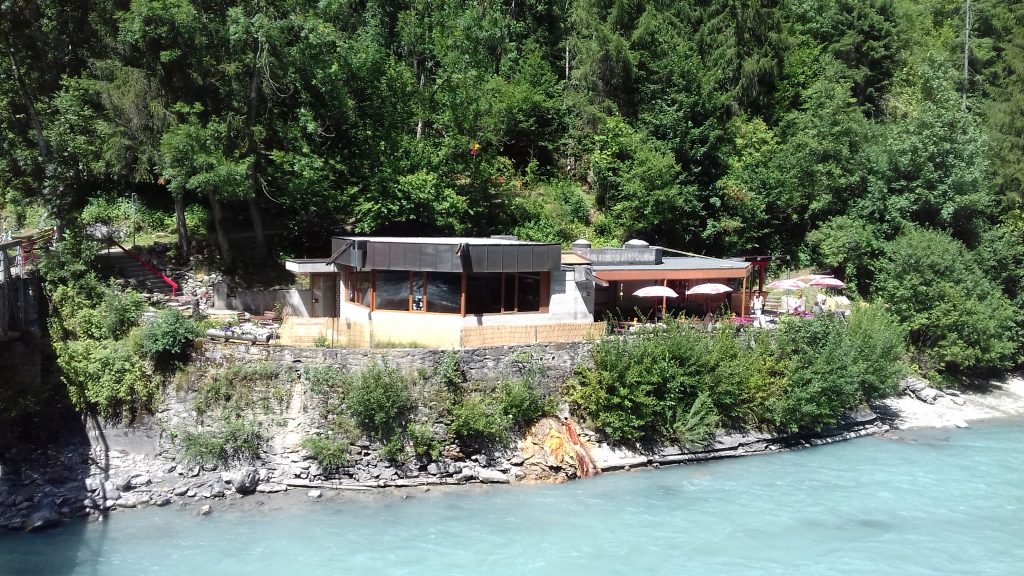 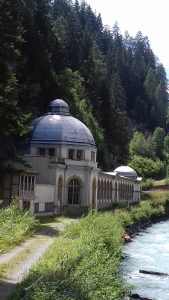 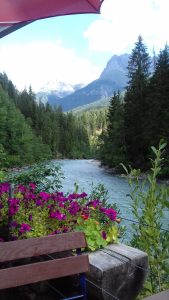 Scuol: view on the Inn from the terrace of the Büvetta Sfondraz

The next afternoon, on Wednesday July 25th, we made a somewhat tougher trip: after school we hurried to catch the Postal car from Scuol to Ftan. Aat a quarter to two we started a steep ascent on a stony path towards Alp Laret, where we arrived after a climb of one-and-a-half hour, at half past three. We have been here before: also on June 18th last year at the end of a long hike from Ardez to Alp Valmala. Also today we were sitting outside in the sun with a cooling breeze and enjoying the beautiful views. It was also the moment on which the cows were heading towards the stables for milking. Some self-willed cows went for a quick sip of water nearby, the others quietly followed each other. The cows belong to different owners and spend the summer on the Alp. That was visible: they were of different colourings (brown in many shades, and beige to almost white) and some had impressive horns and other hadn’t (only a dashing tuft). 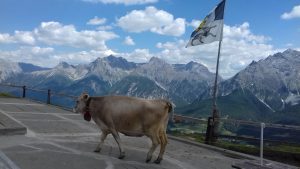 Ftan: at Alp Laret a cow gets going towards the stable 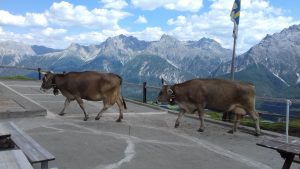 Ftan: at Alp Laret two cows are heading towards the stable within a marvellous mountain setting 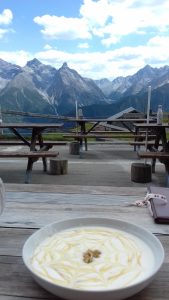 We spent a nice afternoon, during which Monika and I had – again – a lot to talk about. Next evening, on Thursday July 26th, we continued our conversation: at Hotel Altana another Bündner Menü was served, for which I had invited Monika. Again this time we enjoyed sitting at a nicely decorated table and eating tasteful regional disches. Il vin grichun wasn’t left out… – wine from the Grisons, from the Rhine Valley: Malans near Landquart. We chose a spicy rosé (Churer Schiller) and a red Tremune, in which a. o. the grape varieties Merlot and Pinot Noir are combined. 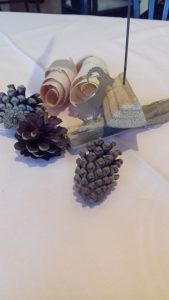 Scuol: Table decoration for the Grisons menu at Hotel Altana

Now it is Friday evening and I have the impression that from tomorrow my holiday can start for real. Then I travel to Zernez by train and to Mals im Vinschgau over the Ofen Pass by Postal car. I plan to hike a few stages of the Via Alpina from there. Here also can be said: “il viadi es la destinaziun” – the road is the goal! A revair – goodbye for so long!