Schwarenbach: Stage 99 of the Red Trail

Over the Gemmi Pass and around the Daubensee Lake

The mountain world around Leukerbad is overwhelming: the end of this valley is protected by the Daubenhorn (2.942 m) in the west, by the Plattenhörner (2.605 ‒ 2.855 m) in the north and the Torrenthorn (2.998 m) in the east. It is pleasantly silent in Leukerbad. Also the minimal light pollution in the night is a bliss: there are a few street lanterns illightened and that is it. Hotel Dala offers a beautiful view in the direction of the Gemmibahn, but also on the traces of avalanches that have come down in early spring just close to the village.

At the copious breakfast the hotel owner told me that because of the severe winter the Gemmi Pass can only be reached with the Gemmibahn cable car, and not on foot, through the Gemmiweg: there not all damages to the road have been repaired.

So I started the trip of the day on the steep road to the downhill station of the Gemmibahn. This cable car has been opened in 1957, and in 1995 and in 2012 been renewed. It takes hikers, bikers and in winter also skiers in an easy way from 1.430 m to 2.322 m. It is a spectacular trip with views all around – also downwards. Where one can see the deep clefts and the rough rocks far below flow by. One also floats above the more painstaking road uphill on foot, the Gemmiweg road. This road is one of the trails over the mountain ridges of the Alpes, which are already known since the Bronze Age (1800 b. Chr.). The actual road has been constructed in 1741/1742: about 60 workers form Tyrol have hacked the steps and the windings out of the rock, over a distance of 2 kilometres and a difference in altitude of 900 meters. From the cable car the extent of the damages caused by the avalanches is clearly visible. The picture has been taken on the way back, when I was standing in the front part of the cable car… 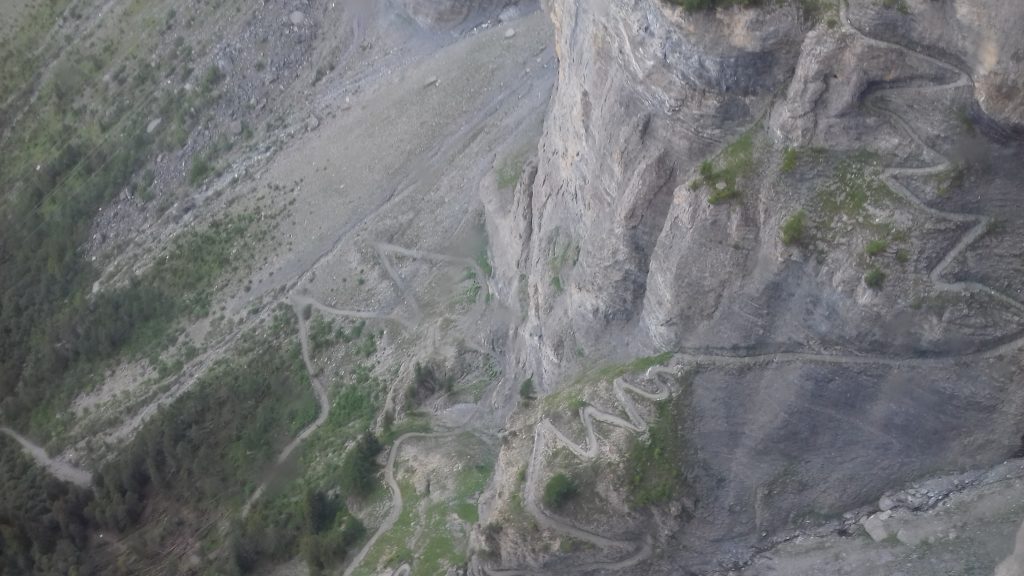 Gemmi Pass: the Gemmiweg seen from the Gemmibahn with at the bottom left side the devastations of the avalanche

Upon arrival at the top station a wonderful panorama was revealed: towards the north the Wildstrubel massif, still covered with a lot of snow and to the south the impressive ridge of the Valais Alps. 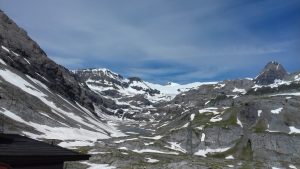 Gemmi Pass: View on the Wildstrubel glacier and to the right the Steghorn 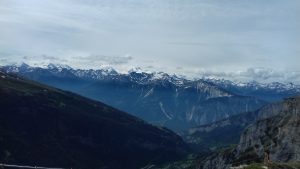 So the first part of my Stage R99 had been easy. Then it was time for the second part, from the Pass height to the Mountain Hotel Schwarenbach. I noticed that there still are so many patches of snow. Here and there some gentians and other small pioneers of spring daintily flowered. It was mainly a rocky area I passed through. This in combination with the sunlight that was now and then filtered by clouds created a special atmosphere. 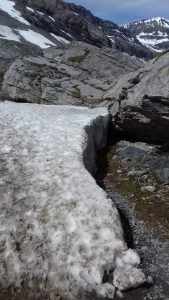 Gemmi Pass: here and there still are patches of snow!

The Daubensee Lake is a large mountain lake, that is fed by the melting water of the snow and the glaciers, but that has not a definite outflow: the water seeps through the porous rocks and resurfaces as a source in the Rhône Valley, near Salquenen/Salgesch, to the west of Leuk. The lake is at its largest in July; in autumn it is almost completely drained, so in winter the area is easily passable! Now the water level is high – and will still be higher when all snow has melted. 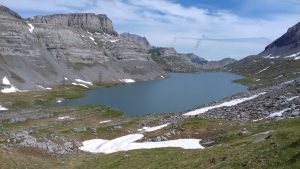 Gemmi Pass: the Daubensee Lake seen from the west with the Rote Totz 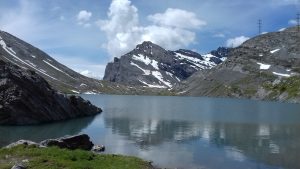 Gemmi Pass: the Daubensee Lake seen from the east with the Daubenhorn

There were spots where the sun had already warmed the soil and there were a lot of flowers that were in bloom, although not quite abundantly. The most striking were the gentians, in all varieties. At some patches the snow had just melted away, so the soil was still grey and brownish. There were already some butterflies and bees flying around. 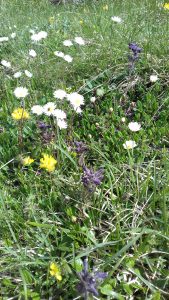 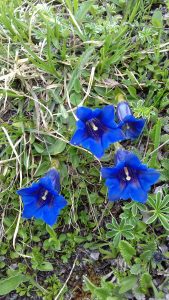 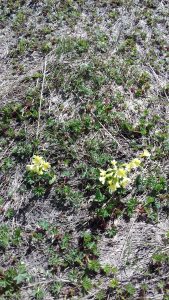 Daubensee Lake: a few primroses on a furthermore rather barren slope

At the east side of the lake the road passes through a narrow valley with rocks that are completely rounded. Everywhere traces can be found of small snow slides that on their passage down the steep slopes carried along a lot of vegetation. But there are already some alpine roses in bloom: in combination with a small mountain lake, rocks and snow it seems a true cliché, but it is however very real! 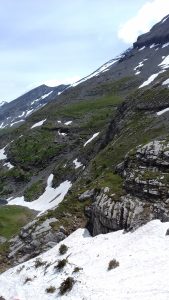 Schwarenbach: these alpine roses will not blossom anymore… 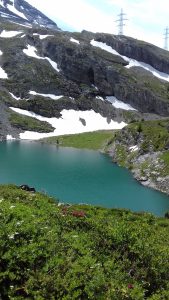 Half an hour after leaving the lake Berghotel Schwarenbach comes in sight. This inn has been built in 1742 as a toll post on the road from the Bernese Oberland into Valais and is situated on the border between the two cantons. It can be reached not only from Leukerbad, but also from Kandersteg. Until the start of the 20st century guests have mostly been transported with the so-called “Gemmi-Wägeli” (literally “small carriage used at the Gemmi”), a one-axle carriage for one person sitting with his back towards the horse and of which the “coachman” walked in front of the horse. This means of transportation is also depicted on the sign outside the Schwarenbach. 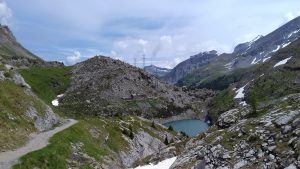 Schwarenbach: the Hotel comes in sight 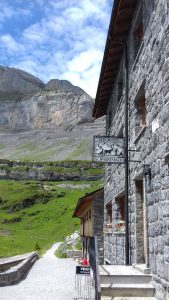 Because here Stage R99 officially ends, I treated myself to a Valaisan Rösti, that was nicely refreshing because of the baked tomato slices on top, and a Pinot noir from the winegrowing area to the west of Leuk. It was a relaxing break! 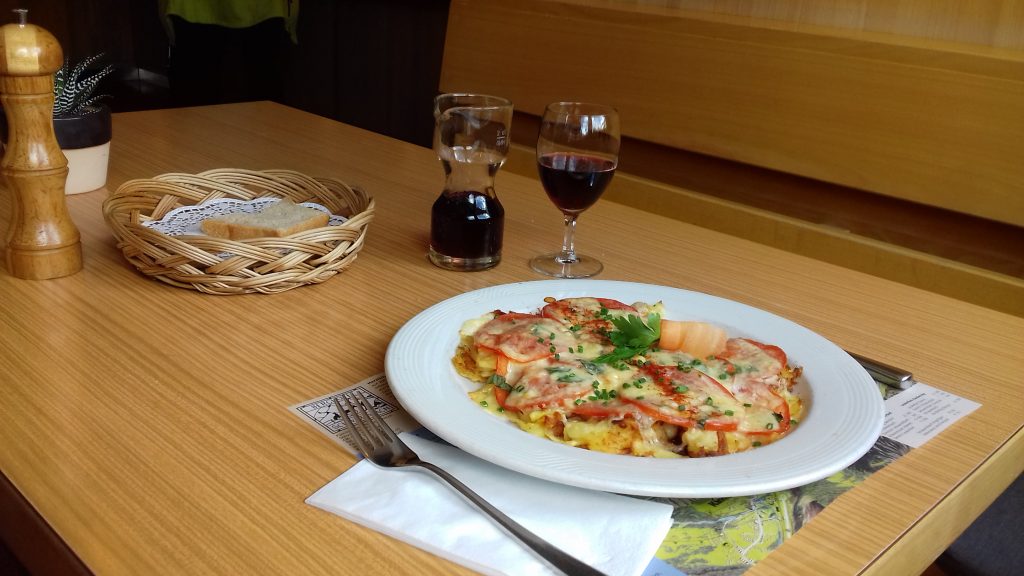 In the Berghotel Schwarenbach many celebrities have stayed, a. o. the French novelist Guy de Maupassant (1850 ‒ 1890). About Schwarenbach he wrote his not very well-known novel “L’Auberge” (The Inn, in French). In this story he describes with his usual pessimistic view on the world how the innkeepers’ family returns to Leukerbad in autumn and the servant, who fancies the innkeeper’s daughter, and an elderly assistant stay behind towatch over the inn. Sam the dog also stays. One day the old man does not return from hunting, the servant gets scared and starts hearing things that are really not there. When he opens the front door to have a look what is going on, Sam slips out. When the dog wants to get inside again and scratches the door and whines, the servant gets that much alarmed that he turns to the bottle and gets completely drunk. After a month all liquor is gone and the servant out of his mind. When the family returns in spring, they find the dead dog Sam at the doorstep and the servant in a state of insanity. Well, not quite a comforting story. Then I prefer reading the story about “Tomba, the Summiteer” (1988 ‒ 1993): this Norwegian Forest (tom)cat, named after the Italian downhill skier Alberto Tomba, was quite an adventurer and had wandered huge distances (he went to Leukerbad once …). This crazy tomcat has accompanied hikers to the highest mountain tops in the area at least 15 to 20 times. He became really famous when on one of these tours he protected the hikers from an avalanche by suddenly stopping in his tracks and hiding behind a large boulder: the hikers followed him and shortly after the avalanche came down on that part of the track they had planned to hike… 25 years after his passing away (feline leukaemia) he has not been forgotten yet: at the opening of this year’s hiking season a sympathetic article on Tomba has appeared in the Berner Zeitung. Also in the hotel several items can be found in his memory; the post cards with his portrait are still much liked… 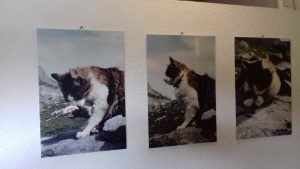 Schwarenbach: picture gallery of Tomba in the basement 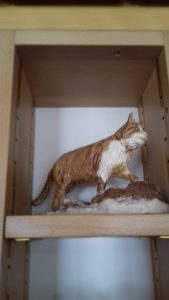 Schwarenbach: a woodcarving of Tomba “the Summiteer” 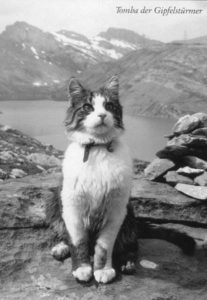 After this strengthening meal I set off again: at Schwarenbach is the official starting point of Stage R100 to Adelboden. Because I didn’t like to walk the same track back again, I followed the narrow and stony footpath on the west bank of the Daubensee Lake. There I spotted a sign pointing to the Rote Chumme and Adelboden… That will be for another time! 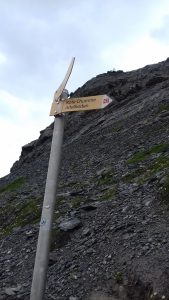 The landscape is rougher and therefor more interesting. The view is different, but so is the weather: more clouds, a splash of rain. Also on this part there still were many snow fields. 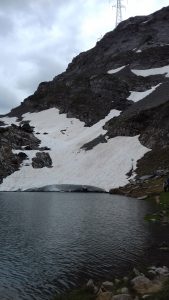 Daubensee Lake: there is more water to come from this package of snow 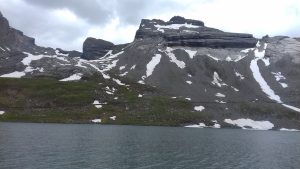 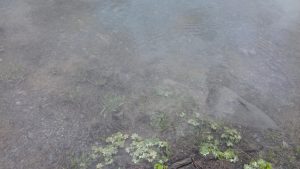 Daubensee Lake: the water level rises by the melting snow – and the rain drops

When I arrived at the west side of the Daubensee Lake I crossed the Lämmerendalu by a bridge: a fast running stream feeding the Daubensee Lake from the surrounding mountains. Following the markings on several large boulders I stood at the bottom of the steep slope towards the mountain station of the Gemmibahn. There is a small cable car towards the top, but I scrambled over tiny paths uphill: avoiding snow fields and boulders I arrived at the top slightly panting – however I am meanwhile accustomed to the altitude again, really! 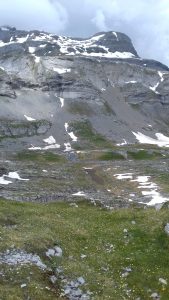 Gemmi Pass: Looking back to the steep slope towards the Lämmerendalu 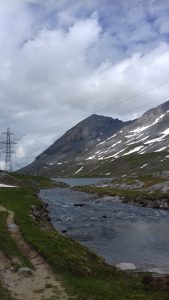 After returning by cable car I went to my hotel. Once inside it started to rain harder. Later the sun started shining again. This was one of those mountain hikes I would like to have more often!