Please click on the hyperlink of the relevant Stage – you will be diverted to the original page in the Via Alpina website in English. It will open in a new page. You can also choose one of the other languages. If you wish to look for the stage the other way round, just click on the box “reverse direction” on the relevant page.

You can enlarge the small pictures by clicking with the left side of the computer mouse: it will open in a new page. Click on the arrow in the upper bar pointing to the left to return to the page in the Paulinehikes website. You can check the source from which I took the picture by clicking on the hyperlinked text underneath the picture. An external page will open. This also serves a purpose as to copyright issues.

Additional information has been provided to the stages which I have already hiked or I am about to hike. This information can refer to a blog. It can also give explanations about a person, a place or an interesting event, mentioned in the text of the original page of the Via Alpina website in question. 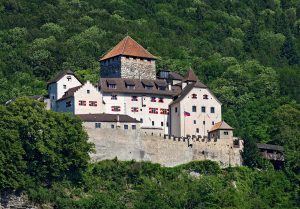 Muschelkalk, German for shell bearing limestone, is formed by sediments with fossils dating back to the Late-Trias, over more than 200 million years. See for more information Wikipedia.

Nagelfluh is a form of natural concrete (in German called “Herrgottbeton“, “Good Lord’s concrete”). It consists of rounded debris pressed into sediments (conglomerate, molasse) and can found especially in the Swiss “Mittelland” (the central part of Switzerland). See further Wikipedia.

Vaduzer Flysch is a sequence of sedimentary layers. See for more information Wikipedia.

The Schwabenkrieg, the Swabian War, took place from January to September 1499. It is also called the “Schweizer Krieg” (the “Swiss War”) or the “Engadiner Krieg” (the War of the Engadin”). It was a war between the Swiss Confederation and the Austrian House of Habsburg with its ally, the Swabian League. This war was won by the Swiss. 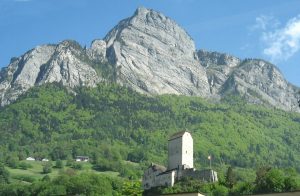 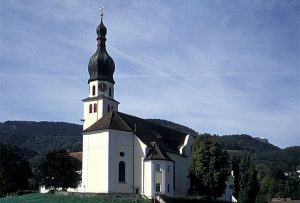 The Church of Mels SG
en.wikipedia.org/wiki

Please, also read the blogs about this stage and Weisstannen and surroundings: July 21st 2017 and September 18th 2017 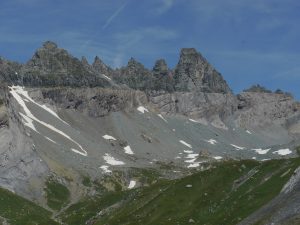 The Glarus-thrust is a geological phenomenon, where older layers of rocks have been pushed over layers of rocks that are younger of age by tectonic forces in the earth crust which were released when the African and European plates collided. Such phenomena have occurred at more places on earth, but in this part of Switzerland the thrust is clearly visible at the surface. See further Wikipedia. See also the website of the UNESCO World heritage Sardona for more information in German or in English.

A “Bannerherr” is the chief of administration of a district town. In English he is called a “Knight banneret“.

A “Landammann” is the president of the cantonal government of some Swiss Cantons; see also the explanation in English.

General Alexander Wassiljewitsch Suworow was an important Commander of the Russian army (1730–1800), who is considered as one of the greatest strategists of modern times. During the so-called War of the Second Coalition (1798-1801) he was commanding the Austrian-Russian Army, who fought against Napoleon’s France in coalition with Great-Britain. He conquered the Gotthard Pass on the French, but had to lead his troops through the Central and Bündner Alps, in the meantime covered in snow, a.o. over the Panixer Pass  in order to reach Austria again. Although the starving Russian troops looted the Swiss rural area, the Swiss are still full of praise for General Suworow. By his endeavours he contributed to the ending of the vassal state, the Helvetian Republic, installed by the French. That is the reason why in various places where the General has been, plaques and memorials in his honour can be found – also in Elm. For more information on General Suworow and his strategies in Switzerland see Wikipedia. 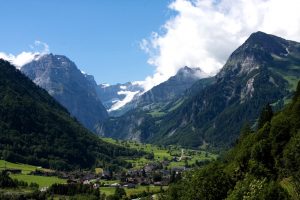 Linthal with the Biferten glacier at the beginning of the Valley
en.wikipedia.org/wiki

Bad Stachelberg was a spa resort built near a spring with sulphuric water between Linthal and Braunwald. The water was already used since 1768; its healing qualities are still acknowlegded as being beneficial for the skeleton, skin, hair and nails). See further the website of the Geopark Sardona (this item only in German).

Field Marshall Moltke, Helmuth Karl Bernhard (since 1870 Count/Graf) von Moltke (1800 – 1891), was a German General-Field Marshall and during thirty years Chief of Staff of the Prussian Army. He is generally considered as one of the most important strategists of the second half of the 19th century. He developed a newer, more modern method to control the troops in the field. For more information see Wikipedia.

General Dufour, Guillaume-Henri Dufour (1787 – 1875), was a Swiss general and topograph. He served under Napoleon I and led the Swiss army to victory in the war against the Sonderbund (a religious civil war between the catholic and protestant cantons in 1848). He was chairman of the First Convention of Geneva, where the International Red Cross was founded. For more information see Wikipedia.

Please, also read the blog about this stage (Elm to Obererbs): September 20th 2017. 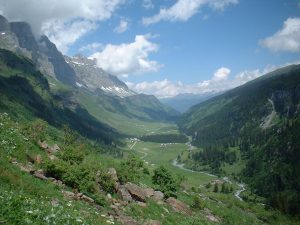 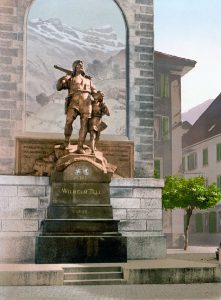 The Wilhelm Tell Memorial in Altdorf UR around 1900
commons.wikimedia.org/wiki 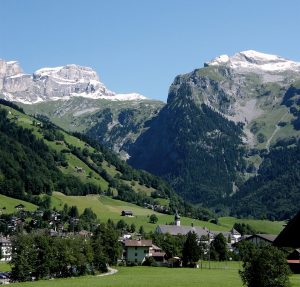 View on Engelberg OW with the monastery
de.wikipedia.org/wiki 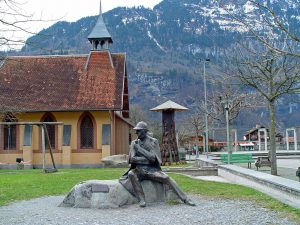 The statue of detective Sherlock Holmes in front of the English Church in Meiringen BE
de.wikipedia.org/wiki 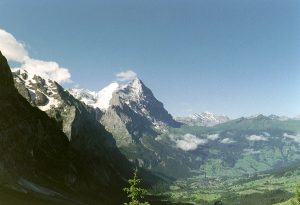 View into the Grindelwald Valley BE and the mountain Eiger
de.wikipedia.org/wiki

View on the Kleine Scheidegg with the mountains Eiger, Mönch and Jungfrau
en.wikipedia.org/wiki 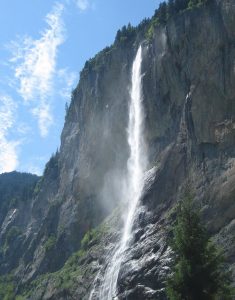 The Staubbach waterfall near Lauterbrunnen BE
en.wikipedia.org/wiki 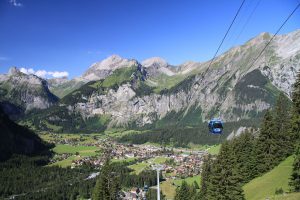 View into the Kandersteg Valley BE
en.wikipedia.org/wiki

Stage C13  and Stage R100 of the Red Trail are identical. 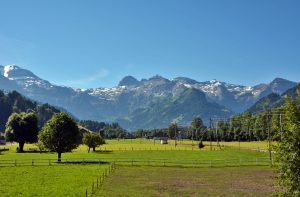 Lenk is the final destination of the Green Trail. Stage C14 and Stage R101 of the Red Trail are identical.