“Next stop Sargans“. Normally this announcement in the train is a sign for me and many of my fellow-travellers to start gathering our luggage, because the stop after Sargans, about 8 minutes later, will be Landquart, meaning changing to the connecting narrow gauge railway towards many different places in Canton Grisons. However today this announcement meant that I had arrived at my destination. From here I will hike some stages of the Via Alpina and this time taking the Green Trail, from Liechtenstein (Sücka and Vaduz) passing Sargans and through the heartland of Switzerland towards Lenk where it connects with the Red Trail, but by then many stages will be completed…

Up until now the train journey from Zürich to the Canton Grisons was an interesting trip towards a next destination, but now I was going to get off the train in Sargans, I watched the impressive mountain range of the Churfirsten more intently than other times. This mountain range rises steeply from the northern side of the Lake Walensee. The capriciously shaped and layered rock formations give a clear picture of the gigantic forces which have been released when the Alps were formed, so many millions years ago. This area is close by the area situated to the south of the Lake Walensee, the “Tectonical Landscape Sardona“, since 2008 on the UNSCO World Natural Heritage  List. Here the famous  Glarus-thrust can be seen: a geological phenomenon, showing older layers of rock pushed over younger layers of rock. But this is also a matter for future stages on the Green Trail. 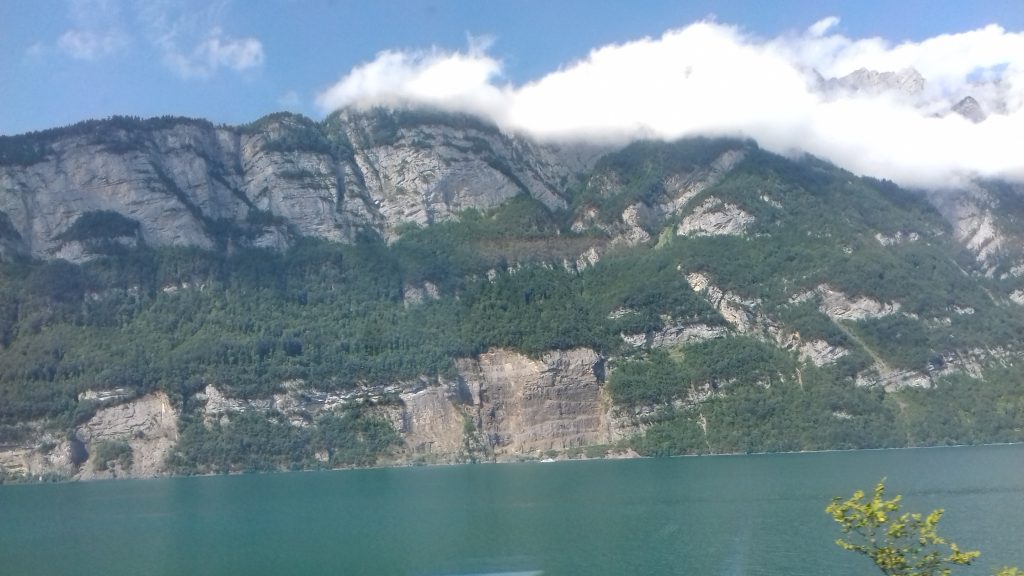 Walensee Lake: View on a part of the Churfirsten

After a wonderful train trip I arrived in Sargans and checked in at the quiet Hotel Post. Armed with the knowledge I acquired by translating into Dutch the “Detailed route description” and the “Natural and cultural heritage” from the Via Alpina website, part of the stages I intent to hike (C1 –C3a) I went for a walk in the old city centre. The Sargans Castle and the Gonzen mountain towered high above me. 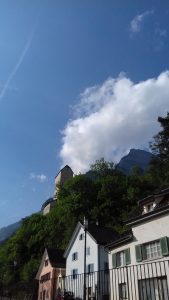 Everywhere on the slopes there are vineyards and all around are fantastic views. 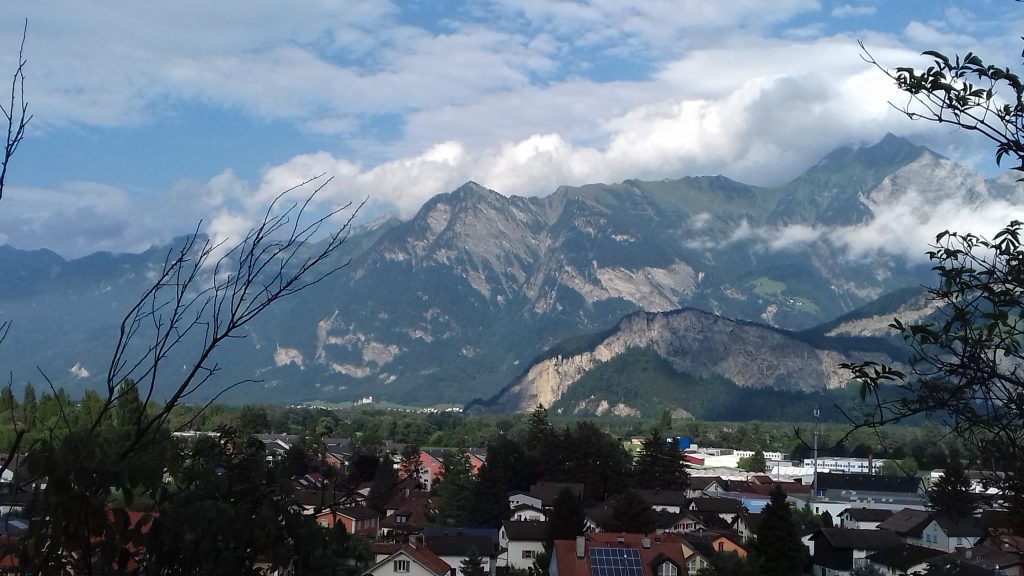 Sargans: View from the Castle Hill towards the Rhine Valley with the Vaduz Castle in the background

On the stone walls lizards hurried away, except one, that was apparently very fond of the warmth… Later on I spotted a lizard running straight up the castle’s main wall, as if gravity does not exists…! 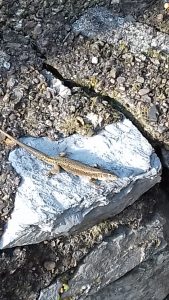 Sargans: Lizard in the sun on the Castle hill

The Castle fascinated me because I saw on what strategic point it was build. The Romans apparently already had a watch post on this rock. On this point the valley of the river Seez has been separated from the Rhine valley by the Rhine Glacier. The rock on which the Castle is build consists of tough Quinten limestone. The dry grasslands on the rock are according to an information panel protected because of the rare and precious flora and fauna.

I also gave in for what the Castle also had to offer: a restaurant. So not long afterwards I was enjoying a nice glass of red wine, the local “Melser”, and a dish of Capuns. These are rolls of chard leaves with a filling of a dough, vegetables, bacon and herbs, slowly simmered and baked over with a cheese sauce… It is a traditional plate from the Canton Grisons, that is geographically situated only a few kilometres away from Sargans. 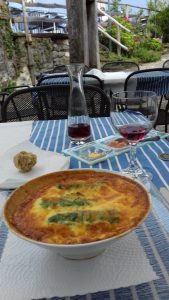 Sargans: Capuns with a glass of red “Melser” wine

Halfway the steep road is the Chapel dating from 1502 and dedicated to Saint Sebastian, the Saint about who was said to be a defence against the Plague. On my way back I was caught by a rain shower, but I also spotted a rainbow, with the chapel in view. The rainbow  was still there when I arrived at the hotel. 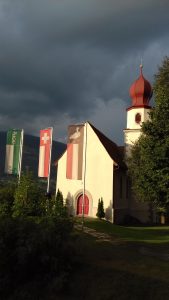 Sargans: The Chapel of Saint Sebastian with menacing skies 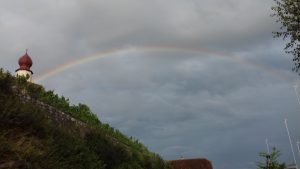 Sagans: The rainbow with the tower of St. Sebastian’s Chapel 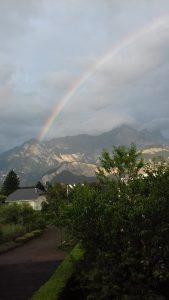 Sargans: The rainbow seen from my hotel

Tomorrow I will continue my hike and my journey…