The Dala Ravine and the Walliser Alpentherme

The river the Dala is all present in and around Leukerbad: it runs from the glacier areas to the northeast of Leukerbad, near the Majinghorn (3.054m) and the Torrenthorn (2.997m) through a deep cleft to Leukerbad  where it flows through the valley towards the Rhône in a slightly calmer way. That part of the Dala I have been able to discover yesterday during my walk on the Natur- und Kulturweg. Upstream the Dala is likely to be even rougher and more spectacular: there is the so-called Thermalquellen-Weg (Road of the thermal springs), that continues as the Thermalquellen-Steg (Path of the thermal springs). The day before yesterday, Monday 25th, I walked that complete trail. Today I visited one of the many thermal bathes in Leukerbad, the Walliser Alpentherme. This is fed by the St. Laurentius spring.

The Thermalquellen-Weg walk starts at the Dorfplatz (Village square) in Leukerbad and follows the course of the Dala upstream. On several points information panels in German and in French have been placed. On one of them a schematic illustration is displayed of the course of the water, which – as has been researched – takes 40 years to change from rain drop or snow flake into thermal water. Also the springs themselves are subject to requirements. Thermal springs should have a minimal constant temperature of 20°C, while mineral springs should have a minimal content of dissolved mineral particles of 1000 mg per litre. In Leukerbad the temperature varies from spring to spring between 31° C and 51°C – the St. Laurentius spring is the warmest. 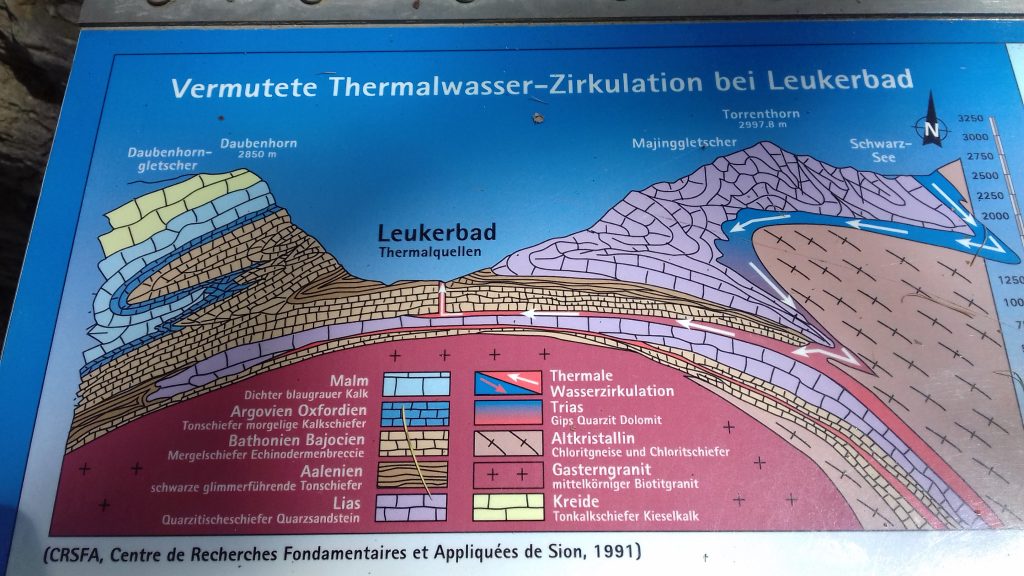 Leukerbad: on one of the info panels is indicated how the water circulation works

The Thermalquellen-Steg starts on a path composed of metal grids with cables running at the waterside, which are fixed to the rock at a height of 4 metres above the Dala and by that giving a spectacular view on the water course with its rapids and turns. 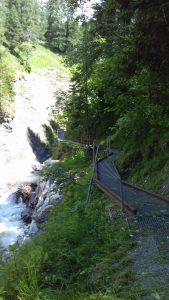 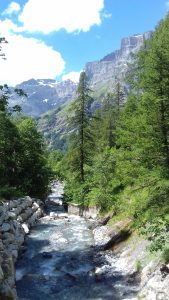 Leukerbad: The river Dala leaves the Ravine towards the west 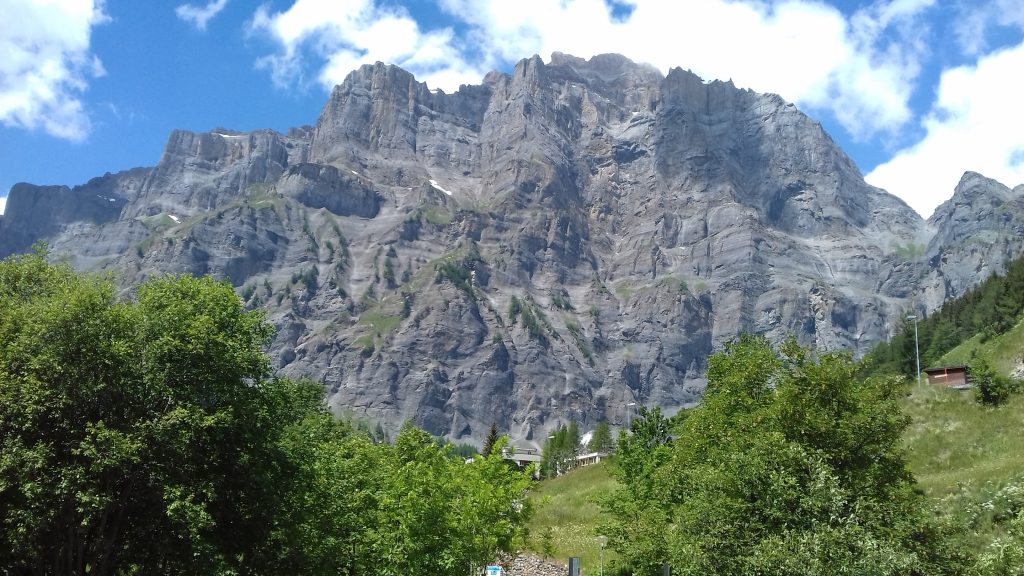 Leukerbad: view from the start of the Thermalquellen-Steg to the west

The Dala created a path through the soft rocks by the force of the water. That is why it has such a tortious bedding. Here and there mineral water flows out of the rocks: discolourations appear on the rocks. 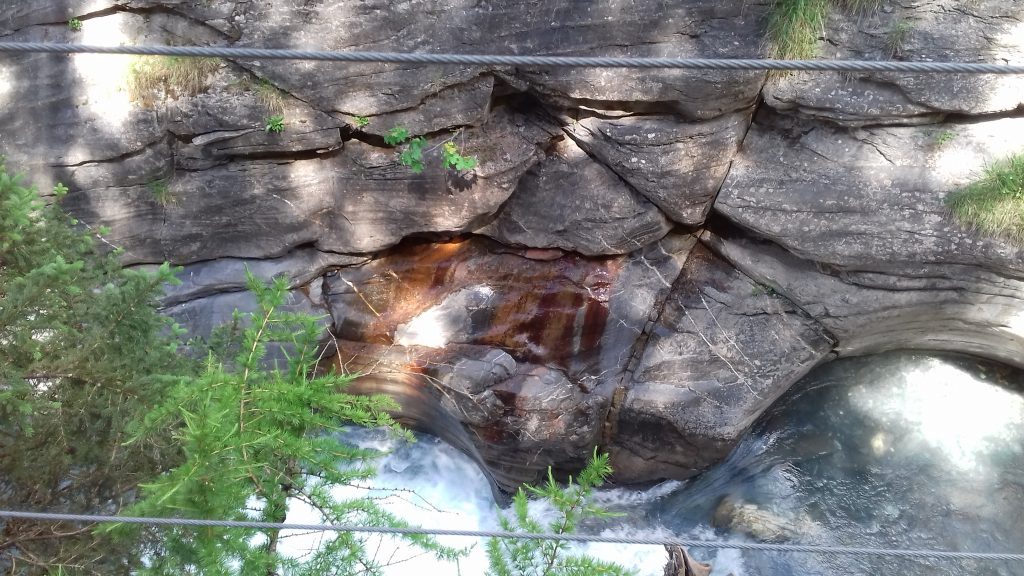 Leukerbad: here mineral water flows out of the rocks

The Thermalquellen-Steg goes on and on. Here are also overhanging rocks that block the sunshine. Then the moment arrived that I had to cross the Dala on a hanging bridge that rather moves along… With a throbbing heart I have crossed the bridge as cautious as possible to prevent the bridge from swaying too much. Beneath me the water was churning with an ear deafening sound. Impressive, that energy that is already released at this point: I wonder how it will be at the real waterfall? 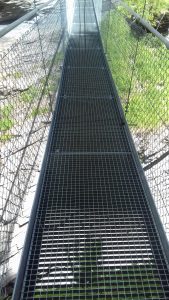 Leukerbad: there is the suspension bridge on the Thermalquellen-Steg! 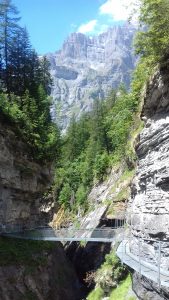 Leukerbad: from a distance the suspension bridge looks quite harmless…

After having climbed still a few more steps we were treated to another scene. Here again the power of water could not only be felt but also be seen: over the centuries the water had ground out a cauldron-shaped hole in the rocks while making a turn! The weathered trunk of a tree that has been cut a long time ago was standing in the sunshine. 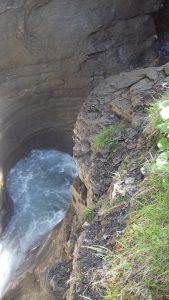 Leukerbad: The Dala has “polished” a cauldron-shaped hole in her bedding 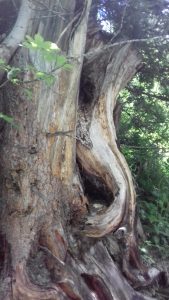 Leukerbad: an old tree trunk along the path to the waterfall

Climbing more uphill I heard the waterfall before I saw it: with a thundering roar the water comes down. Here as well I felt how much energy was released: it was “awe inspiring”. The beginning of the waterfall was not quite visible, but that added to the experience of this display of forces! 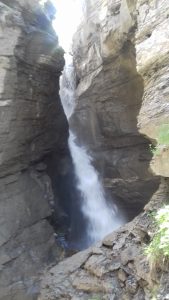 Leukerbad: the Waterfall in the Dala Ravine 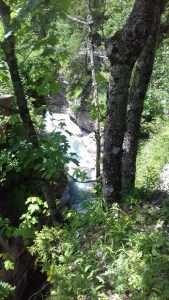 Leukerbad: the Waterfall is hidden behind the tree leaves

From there I chose a trail which would take me back to Leukerbad with a wide detour over the alpine meadows. The weather was splendid, but rather windy. Here the exuberance of the flowers was, in comparation with the vegetation around the Daubensee Lake, where I was on Sunday, completely “over the top”! A large solitary Yellow Gentian (Gentiana lutea) – and later on I saw a whole field with it! ‒ and on a moist meadow one sole Common cotton grass (Eriophorum angustifolium) that was waving in the wind. I also spotted a large field overfilled with orchids. There was no end to it all! 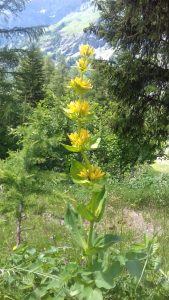 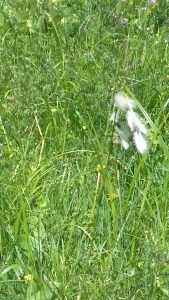 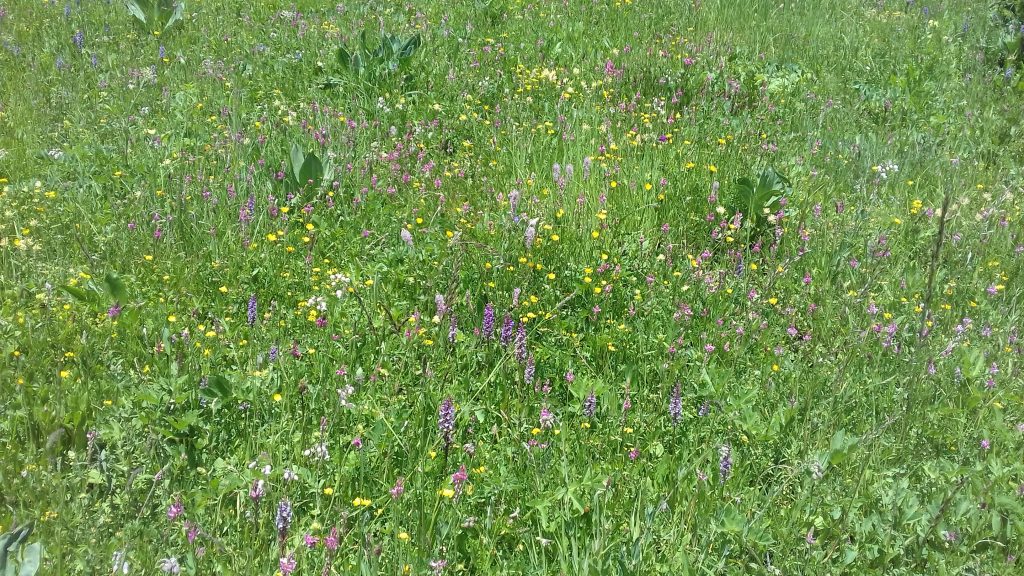 Continuing my walk in the sunshine over a comfortable path I turned a corner and saw that an avalanche had been roaring through into the side valley of an affluent stream of the Dala: the small bridge had gone, the sides of the little valley were very steep and polished by the force of the avalanche. The walking track was indicated with red/white tape. I had thought that I would not have to address my courage again that day, but I was wrong: with difficulty and some fearful sliding I reached the rock solid, iced layer of snow, which was grimy with soil and little branches that the avalanche had been dragging along. This also made the power of nature palpable! 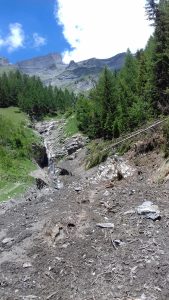 Leukerbad: where has the track gone after the passing of the avalanche? 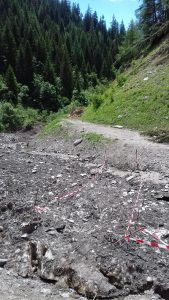 Leukerbad: the track runs between the red/white tape…! 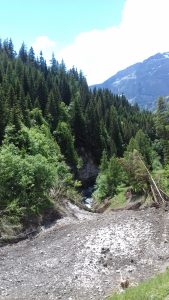 Leukerbad: the avalanche fills up almost the whole valley

This obstacle taken the way back to Leukerbad was without any further surprises.

This morning I decided that the time had come for a spell of wellness: the closest to my hotel is the Walliser Alpentherme, a palace-like, but modern bath which gets its pleasantly warm water from the St. Laurentius spring that comes to the surface at the Dorfplatz, the Village square nearby. There weren’t a lot of guests, as the high season was still to start. What a luxury to be able to swim to the outside basin and then to enjoy that wonderful view on the surrounding mountains. Inside again I have dozed off for a while, lounging on one of those comfortable deckchairs and staring at the ceiling, decorated with blue skies and bearded vultures…

After the bath I took lunch in one of the restaurants in the city centre: Restaurant Walliser Kanne. I chose the “Gemmi-Schnitten”: two slices of bread with ham and bacon in between, halved apricots on top, covered with a layer of cheese and baked in the oven. The dish was served in a cast-iron bowl and looked quite innocent. The cheese ‘though proved to be “blisteringly” hot and the bread was drenched in white wine before baking. But how tasteful it was! A good Pinot noir completed the meal.

After this day of rest I will continue on the Via Alpina again: Stage R98, from Gampel/Steg to Leukerbad!