Through an idyllic valley …

The first part of the hike was quiet: I walked between the railway line and houses with well-maintained gardens and a view on the Castle and the Gonzen, passed under the motorway and then walked through the outskirts of Mels. The weather was beautiful. The surroundings became more attractive when in the town I crossed the river Seez. 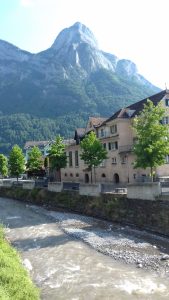 Mels: River Seez with the Gonzen mountain in the background

After a rather steep climb I passed the last houses of Mels and spotted on a meadow in the shade a female chamois with a yearling of last season. They were grazing peacefully until they probably got my smell – and they disappeared into the woods. After that point the road kept on going up: it was an ancient and rather broad track through an magnificent beech forest. This should  be the old road dating from so many years ago, on which tradespeople with their loaded mules, hunters and farmers passed into the valley. I realised that it was quite special to be able to walk here just for fun and without major worries on the same track those people had followed because they had to do so in order to make a living and to survive. 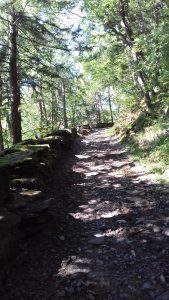 Mels: The old road to Vermol through the woods with dry stone walls

It was nice to walk in the shade, because in the meantime the temperature had risen to a summerly level. After passing through the woods I entered the sunlight again and had a wonderful view over the valley: it was an idyllic picture… 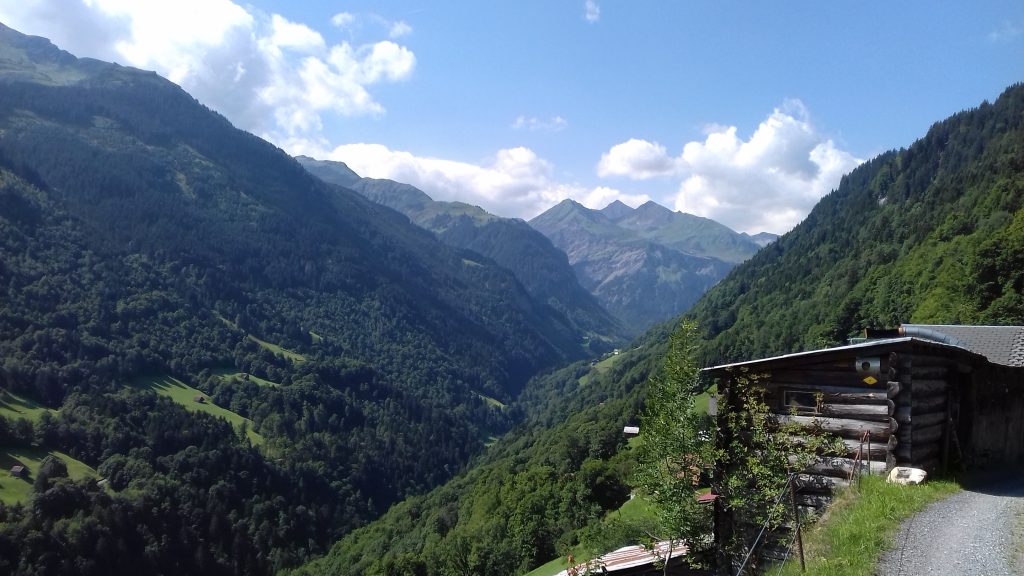 View into the Weisstannental Valley

I stopped for a little chat with a man, who was mowing the sides of the road with a bush trimmer. He told me that there are a lot of chamois in this area and that they are staying here all year round. Early in the morning they are grazing with their kids on the meadows near his house… The variation of lush meadows, old forests of beech and spruce and the many waterfalls made the hike very pleasant. 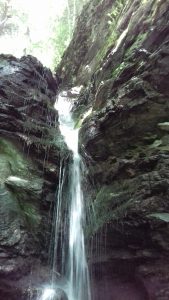 Weisstannental Valley: One of the many waterfalls, that feed the Seez

Perhaps hardcore alpine hikers wouldn’t find a stage like this one very exciting, but I on my part love to walk though this green, wooded area and to notice how generations of farmers and other outdoor people have lived and worked, clearly with a lot of dedication and perseverance. In the small village Schwendi, a farmer has with pride nailed on the stable door all the prices he has won with his young St. Galler Braunvieh: 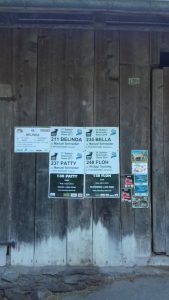 Schwendi: Even more prizes for the St. Galler Braunvieh 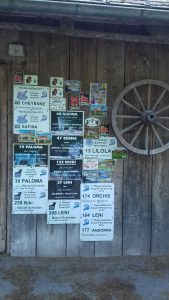 After finishing a large glass of apple juice with mineral water in the Gasthaus zur Mühle I arrived after a while at the main road through the valley and I could clearly spot from this point the Gonzen mountain again. 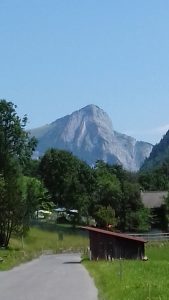 Schwendi SG: here is also a view on Gonzen mountain

Along the banks of the softly murmuring river Seez I have continued my hike and arrived in Weisstannen. It has been all in all a very nice trip. 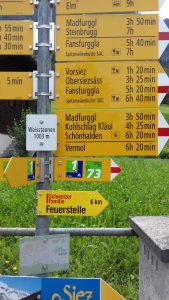 Weisstannen: final destination of this stage

It is idyllic in this valley. However during my hike I have seen in several places that damage was caused to the landscape by mudflows. During the journey back to Sargans the bus went slowly due to construction works on the road, where new concrete walls were installed at the side of the Seez. Also large piles of branches and tree trunks were stacked on the side of the road. On the slopes a lot of large trees have been cut. Back in Sargans I searched the internet. Apparently these works are necessary because on two occasions, in August 2015 and in September 2016, there have been serious floodings caused by so-called “stationary” heavy thunder- and rain storms. These storms stay stuck high up in the valley and all the rain falls in the same area, causing enormous amounts of water, mud, trees and boulders to force themselves through and mainly over the banks of the streams and rivers. There are two video’s (in Schwyzerdütsch) about both disasters: “Verwüstung in Schwendi, Weisstannental” of August 10th 2015 (4 minutes) and “Weisstannen-Mels : Naturgewalten gebannt” about September 10th 2016 (41 minutes). The pictures are very disturbing. In the places I passed today, cheerful and enjoying myself, two catastrophes have recently struck. Situations that were far from idyllic… The mountain world really has two faces.