Through the forest and over the mountain pass: a hike with a view

A stage of the Route of St. James through Grisons: S-charl to Lü

After an educational week in the school benches it was about time to go outside and enjoy the fresh air. I was looking forward to set off for the mountains. The weather couldn’t be better: it was a sunny day with a pleasant temperature. The hike would be a nice one as well. Today I was going to hike the trail from S-charl to Lü once more; this is not only a well-known and ancient footpath connecting the Lower Engadin through the Val S-charl Valley to the Val Müstair Valley, but also one of the stages of the pilgrimage trail to Santiago de Compostella, running through the Canton of Grisons. I walked the stage in the opposite direction. 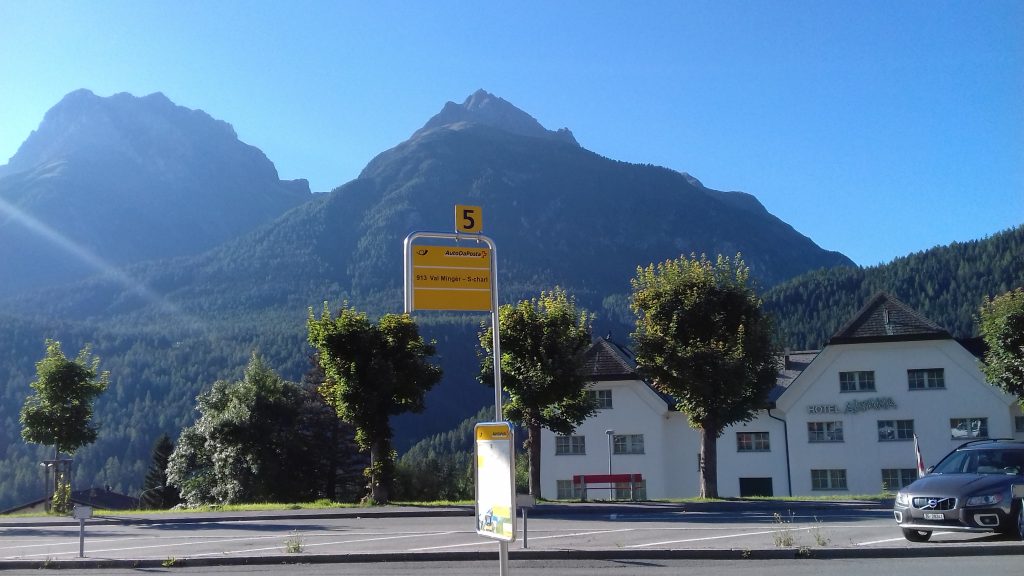 Scuol: Waiting in the sun for the Postal car to S-charl

Again I took the Postal car to S-charl and again I was amazed by the peculiar geological situation in this area: from the Engadin, a wide valley with the river Inn running deep below in a ravine and high mountains on both sides one passes through a ravine with steep slopes that due to erosion are covered with fine and coarser slee to arrive in a friendly, wide, green valley with lots of light. I left the village S-charl and walked along the Clemgia stream glancing back once in a while. There was silence, even the “Gebimmel” (as the sound of the bells the cows are wearing is called in German) quickly vanished. 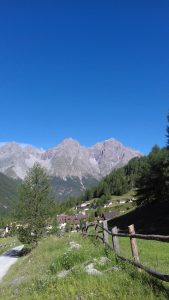 S-charl: Looking back towards the village

The trip brought me further and further into the valley. One of the particularities on the way is the Tamagur Forest (in Rhaetian-roman called “God da Tamagur“), that is considered to be the stone pine forest at the highest altitude in Europe.  In the beginning of the 20th century the forest was in decay: the cattle was passing through and grazing in and around the forest, trees were cut and dead wood was collected without any limitations. A few decades ago the authorities decided that it was no longer allowed to let cattle graze in and around the Tamagur Forest nor to cut trees or to collect wood. Since then the forest has miraculously recovered. It has the status of Protected Forest since 2007. 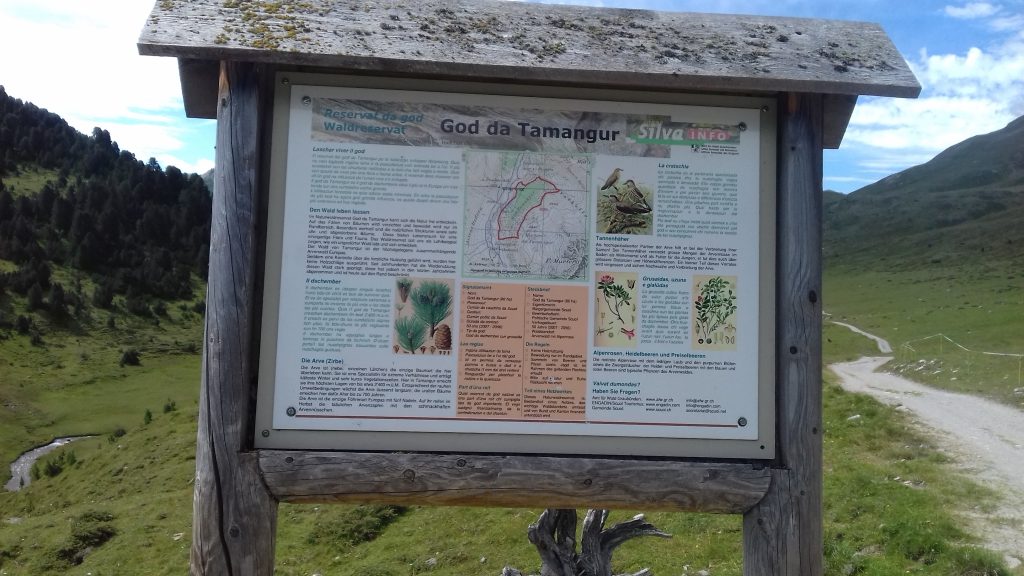 The Tamagur Forest and its decay have inspired the poet Peider Lansel (1863–1943) from the Lower Engadin to write a poem about the demise of the Forest in relation to the decline of the Rhaetian-roman language. The relevant strophe of this poem, Tamagur, reads as follows:

An unofficial translation into English:
The old forest which is falling apart, piece by piece,
is very much like our beloved language,
pushed back from its former wide space
into its current most narrow limits.
If the Rhaetian-roman people do not all forfill their duty
The language will suffer the same fate as Tamagur.

In 2017 however the danger that it would be possible that both the Tamagur Forest and the Vallader could disappear, seems to have passed: the Forest is under official protection and year after year the course “Vallader” in Scuol is attended to by a crowd of more than 130 enthusiastic persons (including me!).

Another particularity in this valley is the Piz Amalia (2.918m). The Municipality of Scuol (a.o.) has renamed this originally nameless mountain top after the Dutch Crown Princess Amalia to the occasion of her birth in December 2003. With this gesture the Municipality wanted to emphasis the friendship between the Lower Engadin and the Royal couple. It is possible to climb to the mountain top – but that will be for another time! 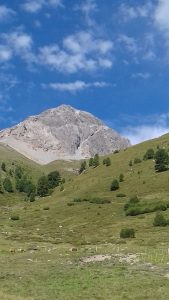 Continuing over an easy road with meadows on both sides, covered with innumerous wonderful flowers, I arrived at the alp hut at Alp Astras, from where the road splits up: the steep, stony mountain trail to the right leads to the Ofen Pass, the steep, stony mountain trail to the left leads to Lü. Although both trails pass through impressive landscapes, I still chose the road to Lü because of the light and the view. 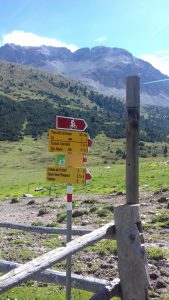 Val S-charl: At a cross-roads – at Alp Astras towards Lü and not towards the Ofen Pass

This narrow mountain trail is not only used by hikers, but also increasingly by mountain bikers. A lot of hikers are annoyed by their presence, but I give way to them, thinking: “Let everyone have one’s own fun”. One moment I spotted two joggers coming towards me – also a sportive option! Much to my surprise they proved to be Andrea, my teacher “Vallader” of last week, and his wife, who went for a run from the Val Müstair Valley, where they are living, to Scuol, where they wanted to get their car… Quite a coincidence! We had a nice conversation, in – yes, for sure! – Vallader. I wasn’t able to speak the language fluently, but I secretly comforted myself thinking that my Vallader would somehow be better than Andrea’s Dutch…

On the Pass da Costainas (2.251m, literally meaning: the “Pass with the steep slopes”) I had a wonderful view into the Val Münster Valley. From this point on it would take about one hour and a half to get to Lü. The surroundings look a lot like the Val Avigna Valley, the quiet valley with the steep descent to Taufers i.M., which I hiked on June 13th 2017 and which I enjoyed so much. There is however just one mountain range between both valleys, with the Piz Terza (2.909m, also called Urtirolaspitze) and the Piz Starlex (3.066m). 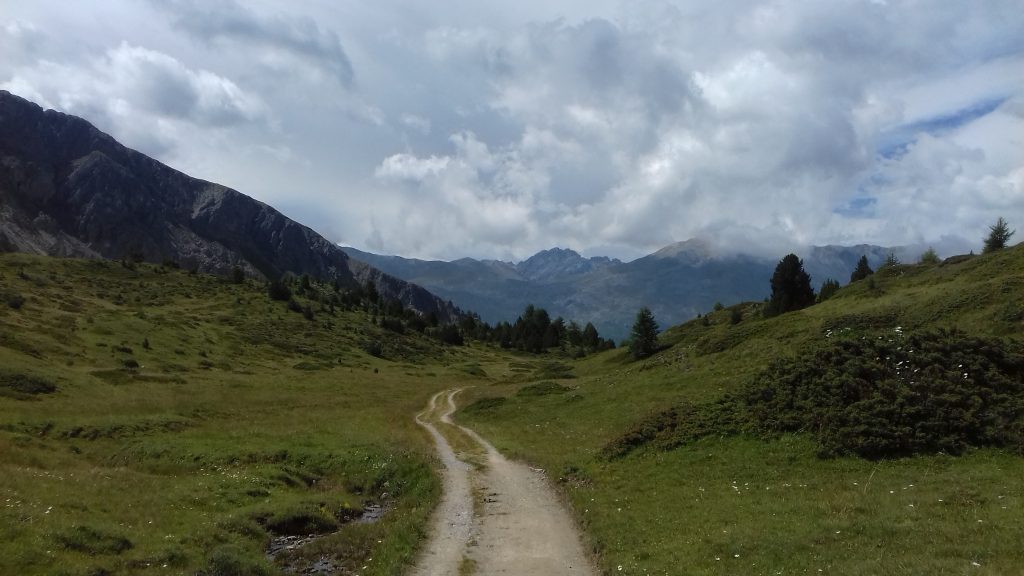 Further on my descent towards Lü I entered a “bear area” again. Since a few years several brown bears have been spotted in this part of southeast Switzerland. They have travelled from the National Park Stelvio–Stilfserjoch, just across the Italian border. 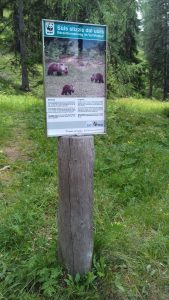 Lü: Here also attention is paid to the bear!

Lü is situated on a south facing mountain shoulder with a magnificent view over the Val Müstair Valley, especially towards the Ofen Pass in the west. 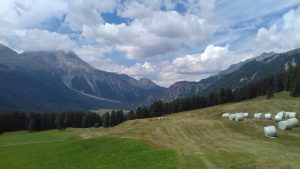 Lü: View from Lü into the direction of the Ofen pass

The village is also situated at the end of a steep slope of the Piz Terza. A memorial keeps the memory alive of a tragical avalanche accident in 1951, in which four people lost their lives while helping in the clean-up operations. 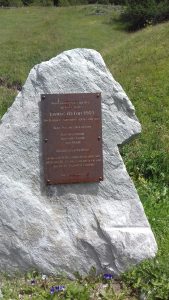 Lü: Memorial for four persons who died during clean-up operations after an avalanche, almost 70 years ago now

I arrived just in time to catch the mini postal car to Fuldera. Nearby a farmer had parked his car in front of his farmhouse to have lunch; in the back of his car I spotted two hay rakes and a leaf blower. On several occasions I have seen farmers use a leaf blower to blow the hay on windrows when they are working on steep slopes! 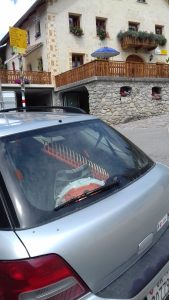 Lü: Hay rakes and a leaf blower in the back of the car

On the way into the valley the enthusiastic bus driver gave us a lot of touristic information. That is why I now know that the range of distinctively flattened mountain tops above the village of Fuldera, the final destination of our minibus, is called the Piz Turettas. 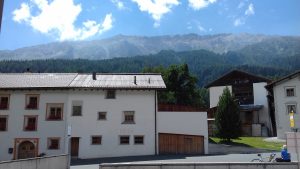 The mountain range of Piz Tuettas (2.958m) to the south of Fuldera 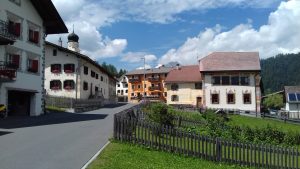 I was just able to fetch a glass of Apfelschorle on the terrace of Hotel Staila before I took the Postal car to Zernez and from there the train to Scuol.

I enjoyed a wonderful day in a beautiful countryside. Unfortunately during the same evening and the following night destroying thunderstorms hit the Lower Engadin: the Val S-charl Valley has been suffering large mudslides over the sole access road. Inhabitants and guests have been evacuated by helicopter. Two years ago (end of July 2015) this kind of disaster also happened and now it has repeated itself… The Val S-charl Valley will not be accessible for at least a week. These events show once more how treacherous the weather in the mountain areas can be…