A wonderful hike to finish off the hiking season

Today I participated in the 12th “Bündner Wandertag“, a annual walking event that was organised for the 12th time by the association “Bündner Arbeitsgemeinschaft für Wanderwege” (“Working group for Hiking Trails in the Grisons”), abbreviated to Bündner Wanderwege (BAW).

This year Scuol was chosen to host the event: one could participate in one of the five hikes. So at half pas nine I joined the large crowd of over 100 enthousiastic hikers, who had gathered at the station’s square. I chose the trail “The unknown valley – Val Clozza“, and with me, 25 others. From the railway station we walked through the older part of Scuol, that is situated high above the Inn valley, with the nice Engadin houses, to the mountain stream Clozza, the actual starting point of our walk. As soon as we left the paved road and the village behind, we started immediately our climb on the rather steep track… In a single file we followed our guides Albert and Ruedi through the gorge, in which the Clozza finds its way into the Valley with a lot of splashing. The weather was fresh and autumnal, the ideal weather for a hike. 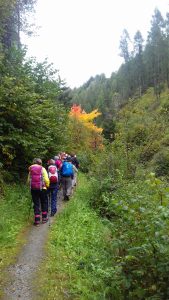 Scuol: colourful – the hikers and nature

Our guide Ruedi drew our attention to a part of a rock besides our track, from which water slowly dripped: this had led over time to beautiful dripstone formations, with calcareous scales and small stalactites.  This is caused by water containing carbonates seeping through calcareous rock. A wonderful surprise! 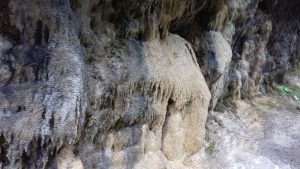 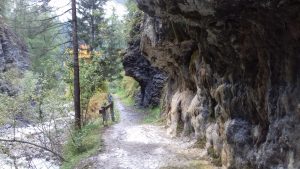 Scuol: View along the track with the dripstone formation

In the flyer on this hike it was already indicated that we had to conquer 700 meters in altitude – and that was what we started to noticed! We walked through shadowy dens forests, and over narrow, stoney footpaths, but always with the sound of the Clozza running nearby. Occasionally we took a break in order to take a sip or a bite, because a lot of us had been travelling from far to Scuol. At a certain moment a lot of people were shouting in excitement and pointing: a chamois at the opposite slope! The animal could hardly be discerned from the background of this steep slope with crumbling rock, but with some effort we could locate the startled animal. It climbed much more agile than any of us would do, in high speed uphill and disappeared out of sight. With some luck however we had our photo opportunity – we were happy as punch! 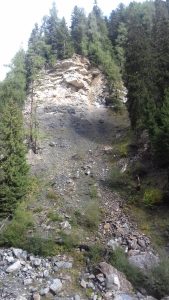 Scuol: The chamois stands on the left-hand side of the ochre rock on the right side of the picture 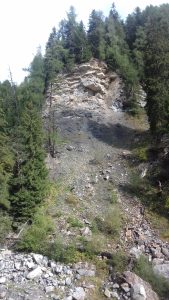 Scuol: The chamois (in the centre of the picture) is making its way into cover on the left side uphill

After about two hours of climbing we arrived slightly short of breath at Flöna, an alpine hut dating from the 19th century, but still occupied. The panoramic views are magnificent as was the weather at that moment! 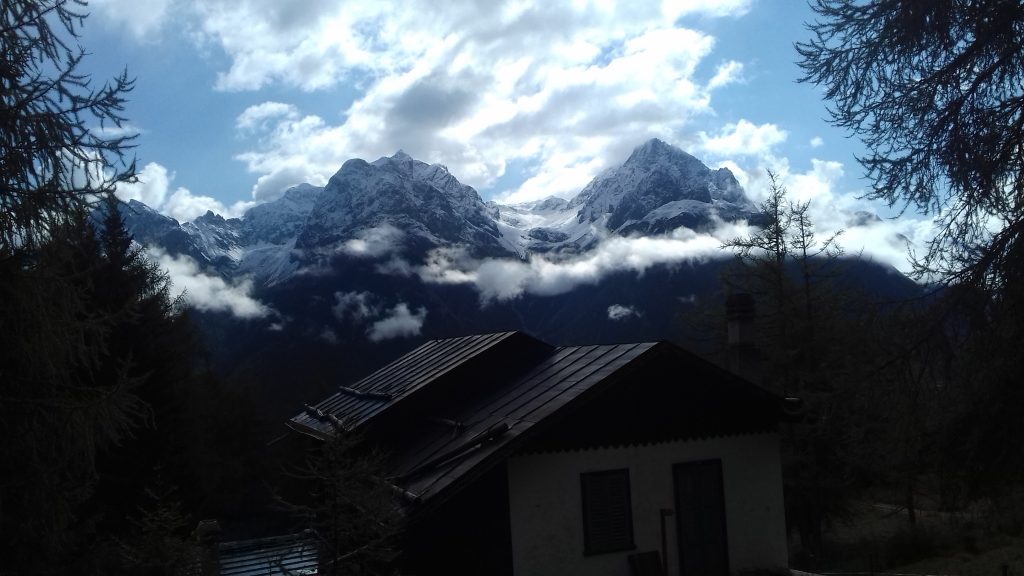 After again a short break in order to continue over a somewhat less steep trail to Nalains, just under the section of the cable car Scuol–Motta Naluns, where we had our lunch “from the rucksack”. The guide told us a.o. that this part of the Lower Engadin is amongst the driest parts of the Grisons and that annually only about 750 mm of rain is falling, while in Klosters at the north side of the mountain chain the amount of rain is about 1.250 mm. Most of the rainfall does not arrive from the west (from the direction of St. Moritz), but from the northwest. Seeing the fog roll in, I thought that this might be the case just now: 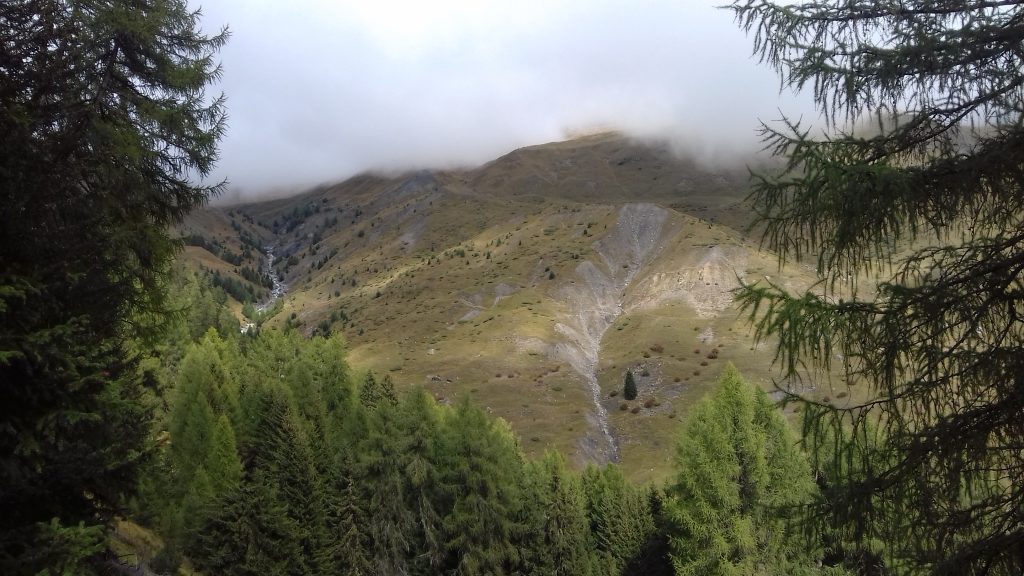 Scuol: Higher up in the Val Clozza the fog is coming in

Not many flowers were still in bloom right now, but there were a lot of mushrooms, like this marvellous Fly Amanita. It added a lot of ambience to this “Enchanted Forest”… 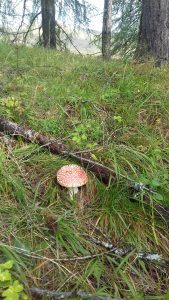 More uphill we got another impressive view on the Piz Pisoc at the west side of the Val S-charl Valley. On its very tip the border of the Swiss National Park, where hunting is prohibited. Apparently the wild life knows about it: to the end of August, beginning of September the chamois, roe deer and deer will withdraw into the safety of that border! 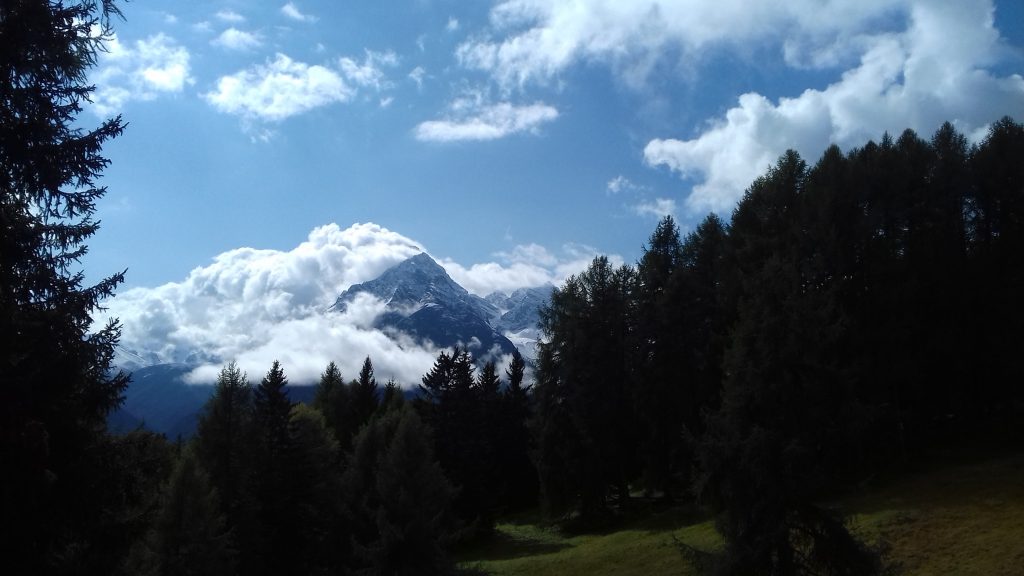 Around half past noon we reached the highest point of the hike, Nalains, an open area in the alpine meadows. It was the time to rest and to have lunch. Unfortunately the weather was not cooperating much, because there was some fog and every now and then a speck of rain was falling down. But that did not bother us much: the part of the hike that was physically the toughest was behind us. But how impressive that part had been… 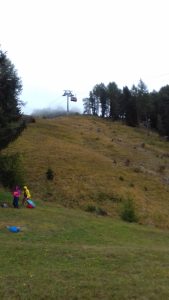 About one o’clock we went off again. From Nalains we walked over a wide and comfortable track that led us back to Scuol. Because we had apparently kept up our pace, the guides had the opportunity to tell us interesting items about the area. Most of it sounded familiar to me, but it was nice to hear it once again. Especially the extremely complicated geological phenomenon of the (Lower) Engadin Window  was explained more clearly than I can reproduce…

When we arrived in Scuol and walked towards the schoolyard the sun was shining again. 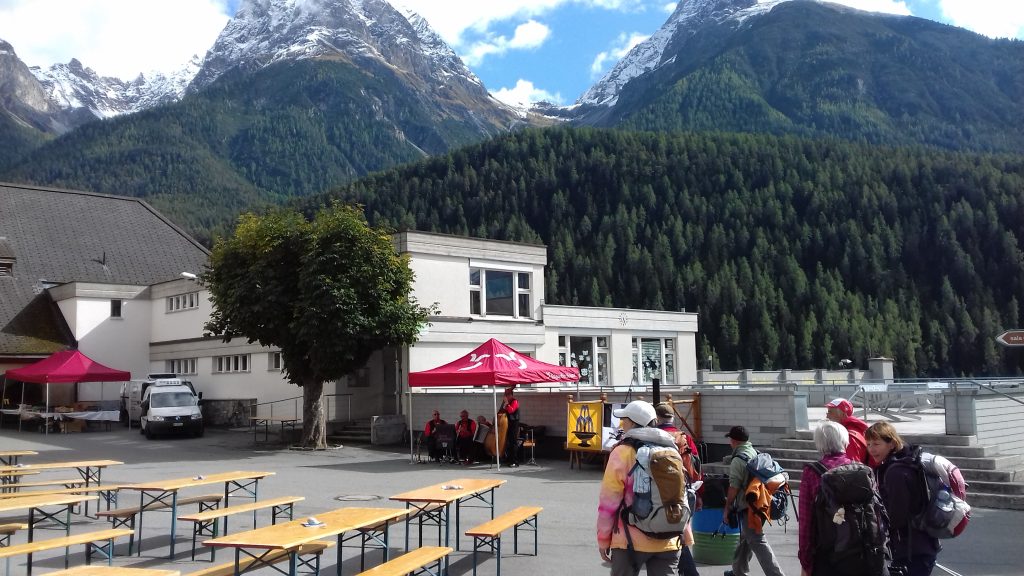 Scuol: The forefront of our group arrives at the schoolyard

There I was again: in the schoolyard, this time not for my classes of Vallader (the local Rhaetian-romanic), but to enjoy snacks and drinks, the “Zvieri” as promised. The atmosphere was wonderful: everybody was pleased to sit down in the sunshine after the rather serious walk and to have something to eat some of all the niceties from the Engadin, like Engadiner Nusstorte (Engadin walnut pie), Birnenbrot (a kind of fruitcake with pears), grilled sausages with mustard, and the speciality of the Grisons, the air-dried beef and other (dried) cold cuts. There was swinging folk music by the quartet “Chapella Jünaiver” (a name that immediately reminded me of the Dutch “jenever”, in English: “Holland gin“…) from Scuol. There were also several information stands about Scuol and hiking in Graubünden. 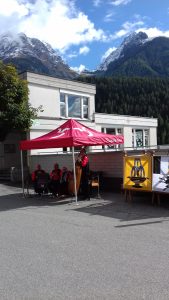 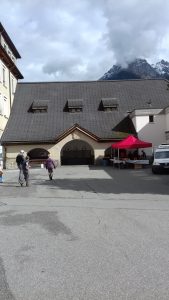 Scuol: Now the schoolyard is the fairground 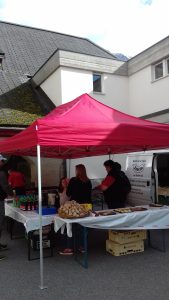 All is set for the “Zvieri”, an elaborate afternoon snack

After exchanging some information with my fellow-hikers and this our guide Ruedi I said goodbye and left the fairground. What a nice way to conclude this hiking holiday and therewith also this season of hiking in the Alps in 2017! I wish to leave for the Alps again next year for another sequel of this big adventure…