Vicosoprano (Val Bregaglia): works of art in the mountains…

Actually the mountains are a true piece of art…

Already several weeks ago Monika sent me a message about the art exhibition “Arte Albigna” in the Val Bregaglia Valley, called the Bergell in German. This is a valley in the Italian-speaking region in Switzerland, bordering on the western part of the (Upper) Engadin, with a distinctive southern character. A visit to this valley was on my to-do list for such a long time! Since 2010 events of this kind have been organised in the Bergell on a regular basis. This time the Albigna reservoir has been chosen to act as a magnificent background for showing works of renowned artists.

Because of the long trip (almost 3 hours by train and Postal car from Scuol to Vicosoprano, Pranzaira/Albigna) Monika, her husband Olivier and I met at an early hour at the railway station of Scuol to catch the 07.41 train. The journey took us through the entire Engadin, the first part by train to the fashionable St. Moritz. From there we went by Postal car to Maloja, passing by the beautiful Silvaplana Lake and Sils Lake with a view on the snow-covered tops of the Bernina mountain massive. There I had a happy moment of recognition. On the signs of the hikes I spotted the logo of the Via Alpina: in Maloja Stage R79 (Chiareggio to Maloja) ends and Stage R80 (Maloja to Juf) starts. This time I have taken a short cut – beautiful, but somehow rather too easy-going! I am looking forward to the much longer hikes of the Via Alpina, which guide the hikers over the trail to the south of the Bernina mountain massive. 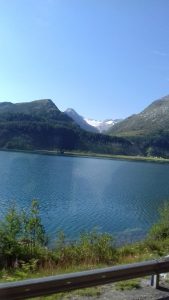 Sils i.E.: The Silsersee Lake with a view on the Bernina mountain massive

From Maloja the road runs over the steep Maloja Pass with its numerous hairpin turns down into the Bergell Valley. 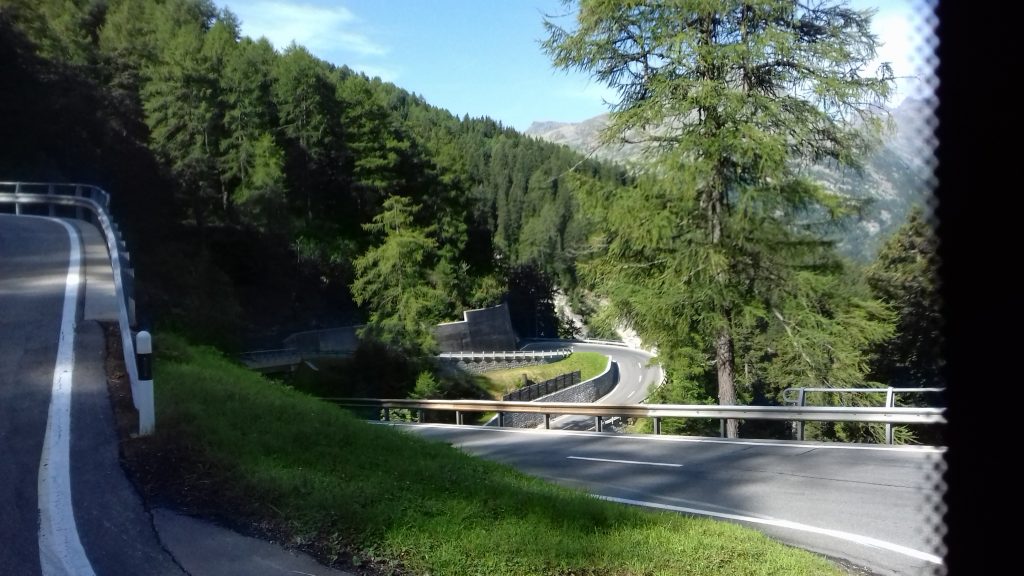 Maloja: The hairpin turns of the Maloja Pass

Arriving in the Bergell we soon noticed the dam of the Albigna reservoir towering high above us – in a slightly menacing way. The bus stop of the Postal car was close to the cable car, renewed in August 2016, which takes the visitors to the end station, just below the reservoir’s dam. Eight people can be transported in this cabin, but because so many art loving visitors had shown up, there was a long queue. We had plenty of time to read the brochure of the art exhibition and to look up in wonder towards the steep, almost vertical slopes of granite. 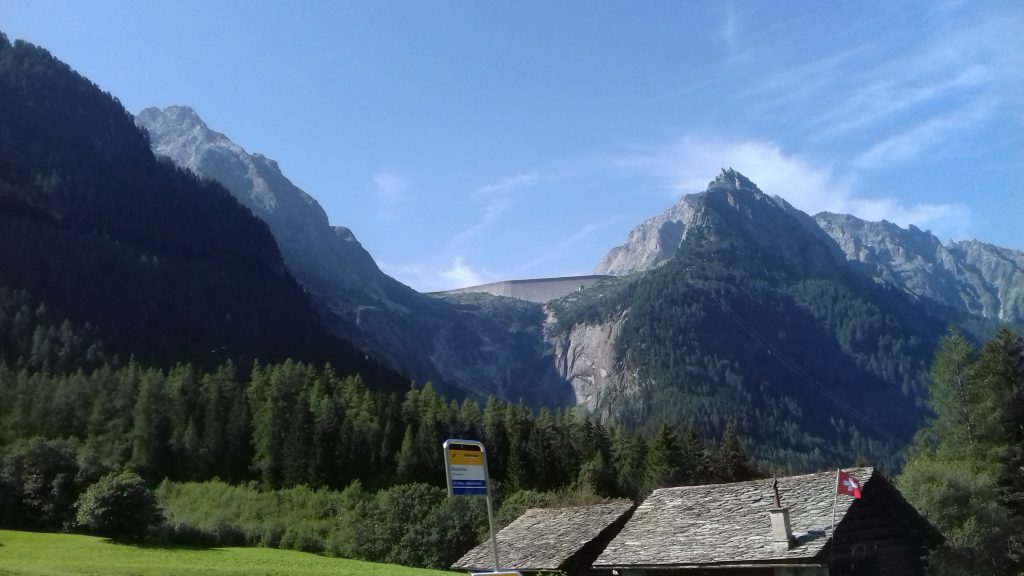 Vicosoprano: The wall of the Albigna reservoir can be seen from quite a distance

The construction of the Albigna reservoir has been commissioned by the electricity company of the City of Zürich, ewz; the works have been completed in 1959. The construction of the reservoir put an end to the destructive floods in the Bergell Valley, which ravaged the area. When looking at the steep slopes and the deep ravines it is quite easy to visualise the dangers involved. This way the water of the Albigna glacier is collected in the reservoir and it generates electricity for the city of Zürich. 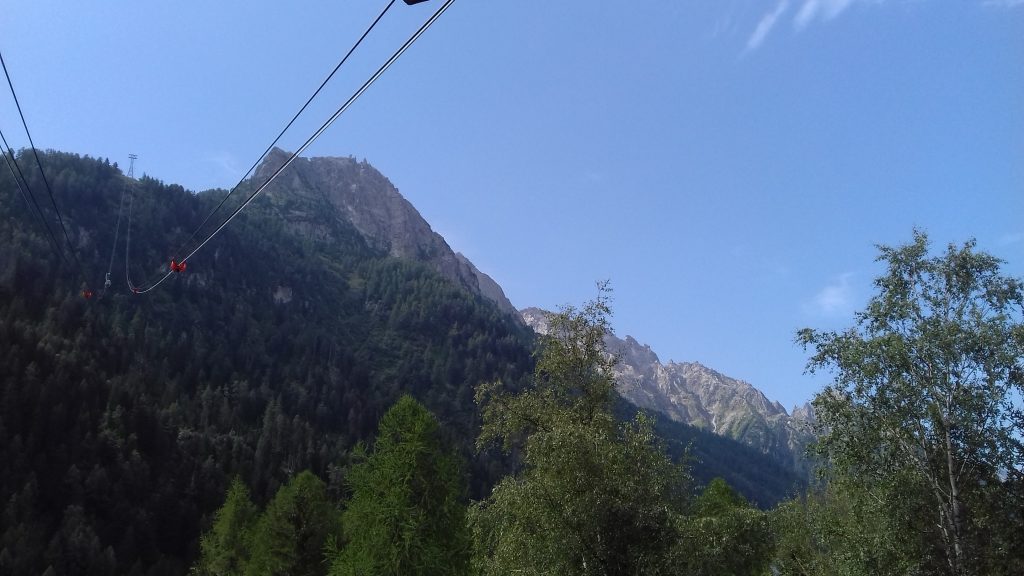 Vicosoprano: Looking upwards to the steep slope with on the right side the mountain La Fiamma 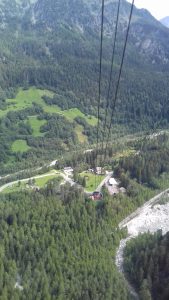 Vicosoprano: The station in the valley … 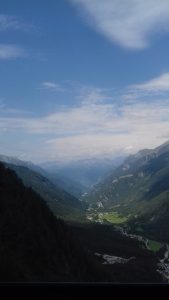 … but what a view into the Val Bregaglia towards the west!

From the end station of the cable car we still had to make a steep climb to the actual reservoir’s dam, but when arriving at the top we had a fantastic view again, both over the Bergell Valley as over the reservoir with rough mountains around, such as the Cima d’Albigna with its Albigna glacier and the Bondasca mountain group. 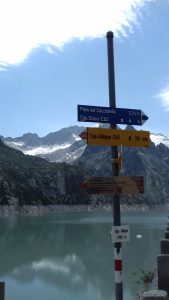 Vicosoprano: Sign towards the Albigna Hut, already visible in a distance – art is floating on the lake!

We walked across the dam, which is about 700 meters long. We had a laugh about some of the artistic expressions: half way the reservoir’s wall a blue delivery lorry (a Piaggio) was dangling as if it was riding down the wall and further on tubular bells with true claw hammers were attached to the railing, ready for the public to be activated by turning a wheel. Still I considered Nature to be the price winning artist…. 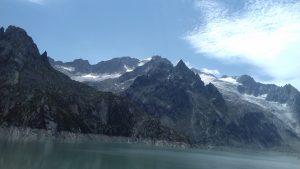 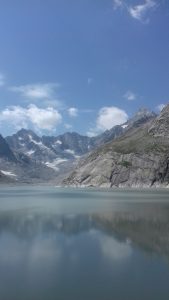 The mountains are reflected in the water of the Albigna reservoir

We hiked to the Albigna Hut on a steep footpath, stepping from one boulder to another – a real alpine hike. But with each pause to collect our breath we were rewarded with wonderful panoramic views or just close-ups of nice flowers. Some pieces of art we did not notice; some others had quite a disorienting effect on us, like the three lamp posts on a mountain slope. But again I put Nature in the first place… 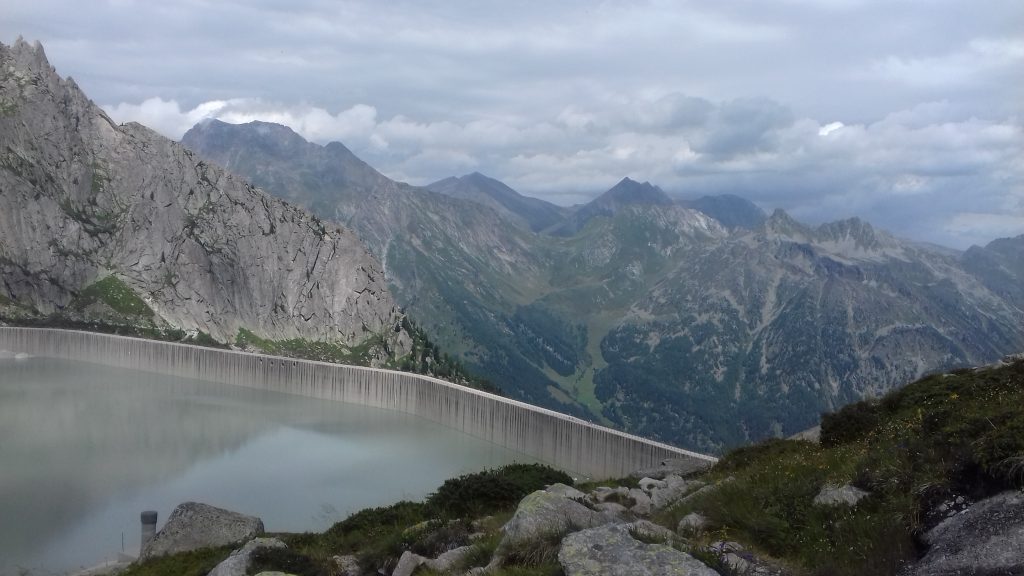 Again we are rewarded with a magnificent view over the Bergell Valley! 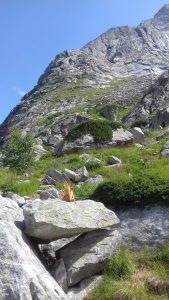 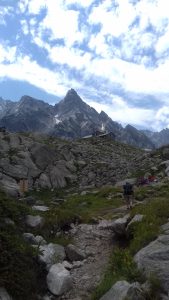 The Albigna Hut with above the Albigna peak comes into view

About an hour after leaving the reservoir’s dam we arrived at the Albigna Hut, which was rebuild in 1956 on this spot. A plaque on the hut’s wall recalls this event. 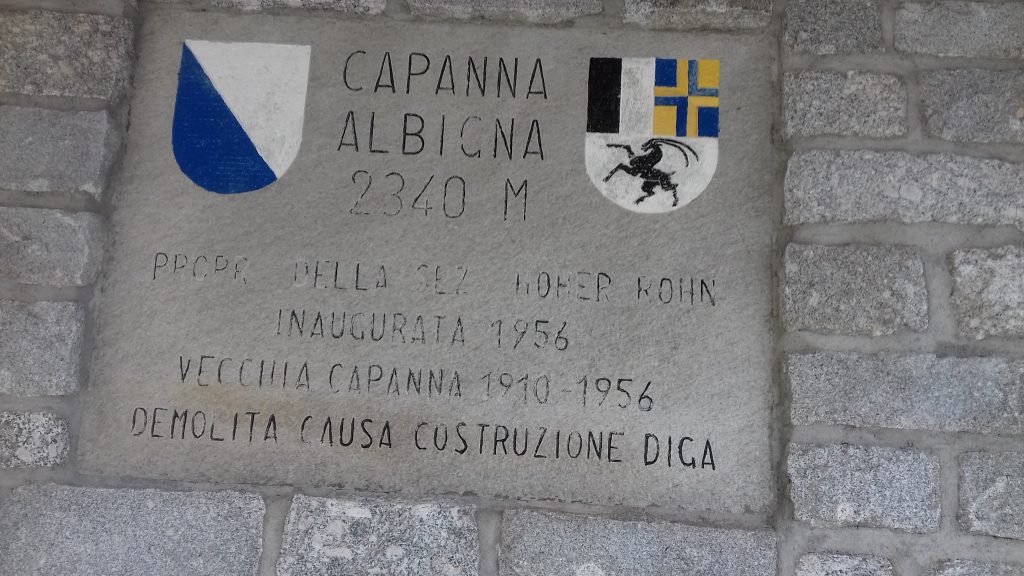 Vicosoprano: This plaque tells that the Albigna Hut has been rebuild in 1956 due to the construction of the reservoir

In the cosy and nice dining room of the mountain hut we did not only enjoy the special views with the ever-changing and contrasting colours made by the sun and the clouds. 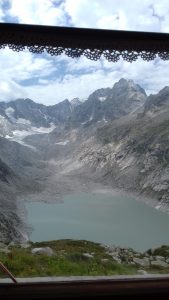 We also enjoyed eating a “Bergeller Platte“, consisting of various regional and Swiss niceties, like smoked meat and a Swiss cheese variety, called Sbrinz (pronounced like “Sbri-ènz“). This is a rather salty cheese with a slight aromatic acidity, made in Central Switzerland (near Lucerne), comparable with Parmesan cheese. We considered this treat as a reward to the efforts made during this steep alpine trip over the large boulders. 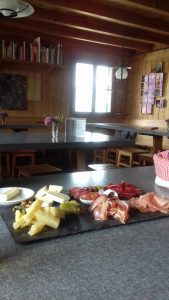 After a nice break with pleasant conversation we walked a little further on the mountain to take (even more!) pictures and to watch through the binoculars the real mountaineers standing on the sharply shaped granite top of the opposite mountain called La Fiamma (2.446m) … 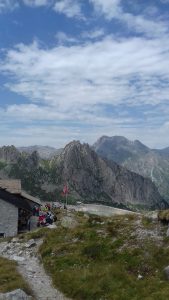 Vicosoprano: The Albigna Hut with the sharp mountain peak of La Fiamma (2.446m)

The way back down was less strenuous as to effort, but not as to concentration. Still I noticed interesting and sometimes endearing things, like plants that seems to cope bravely with the inhospitable living circumstances. 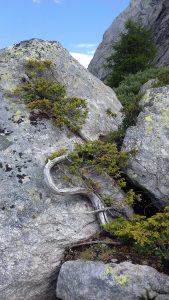 At the Albigna Reservoir a juniper bush shows long-lasting perseverance! 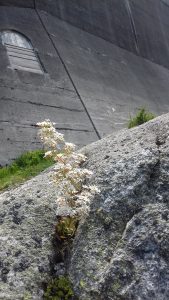 About half past five we returned in Scuol. We finished off this special and adventurous day on the terrace in the garden of Hotel Altana with a glass of Fläscher Chardonnay and some paprika chips (and a carafe of water.

This daytrip marks the end of my stay in Switzerland. In the near future I would like to continue on the trail I have chosen – the trail of the Via Alpina!