Weisstannen and the magic of the Valley

Yesterday I arrived in Weisstannen, the place where I ended my hike on the Green Trail of the Via Alpina in the end of the month of July. When I arrived at the railway station of Sargans I was lucky to catch the bus, a few minutes past five o’clock, to Weisstannen: it was the first bus. During the day the road from Mels to Weisstannen had been closed for traffic, because of the annual march of the cows from the alpine meadows above Weisstannen into the valley, to Mels, the traditional “Alpabfahrt“. Such a march is accompanied with a lot of folklore, traditional costumes, a lot of stands along the road side for food and drinks and cows who are decorated with flowers. The bus had to force its way through the cheerfully chatting and waving crowds. Further up the mountains workers of the municipal cleaning department were busy clearing the road of the manure the cows had left behind. Halfway the trip it started to rain, the mountains were hiding in fog and the river Seez carried a lot of water. 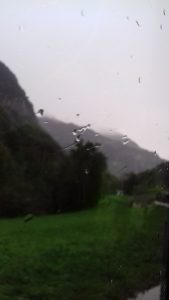 At a quarter to six I arrived in Weisstannen and I checked in at Hotel Gemse , where the locals were sitting at the “Stammtisch“, discussing the Alpabfahrt in every detail while having another drink. After my long journey in crowded trains the tranquillity of the village and the cosiness of the hotel were very pleasant. The rain was falling down, but the village was peaceful. 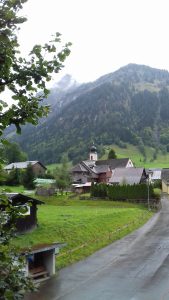 This morning the rain had stopped and the clouds weren’t that menacing anymore, so I set off for a “training hike” to the Batöni waterfalls – a tour of about 3½ hours. When I last visited Weistannen I had seen an information panel with the intriguing title “Orte des Staunens” (“Places of Wonder”). In and around Weisstannen there are three of such places of wonder: the oldlime tree in the village, two large boulders (“twin stones”) and the Batöni waterfalls halfway resp. at the end of the valley. Various magical forces are attributed to all of these three locations. Anyway, to me it seemed a nice and special tour. This year autumn is starting a few weeks earlier than in other years: there are a lot of coloured leaves in the trees along the slopes. 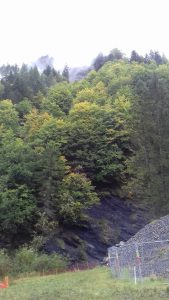 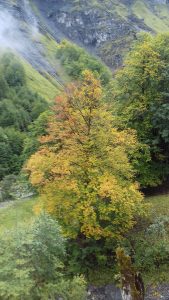 Not only the rain of the past few weeks has left its marks on the tracks, but also the cows passing by yesterday…. It was a rather soggy tour, but with many special, magical moments. 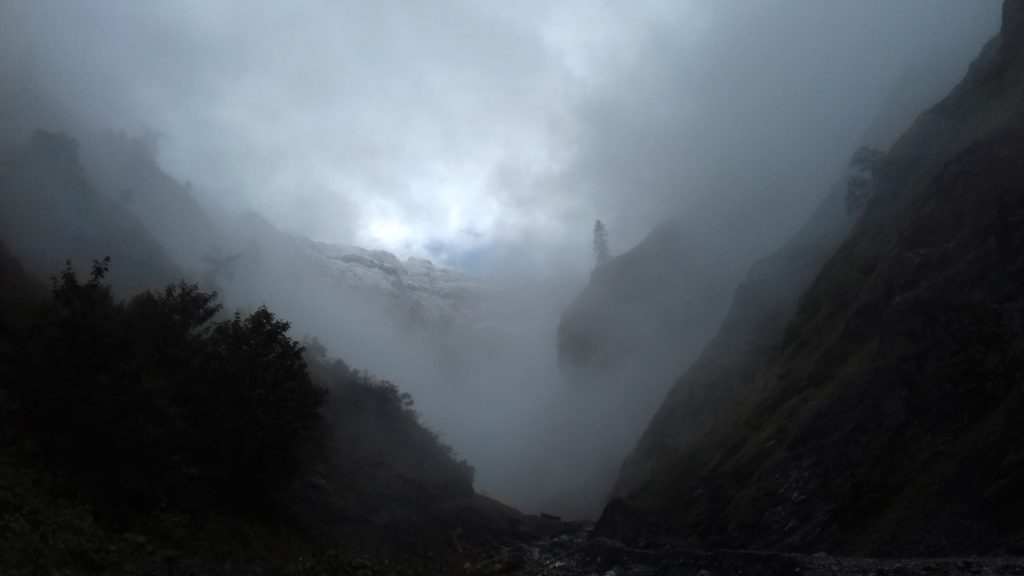 Weisstannen: on the way to Batöni – mystic or just foggy?

On my way I also encountered several obstacles: side streams I had to wade through, steep tracks with a kind of “steps”, stony creek-beds and a large muddy patch, caused by the rain and a small landslide (but in which order?) . 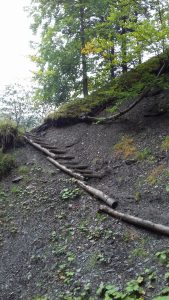 Weisstannen: on the way to Batöni – part of the track is formed by “steps” 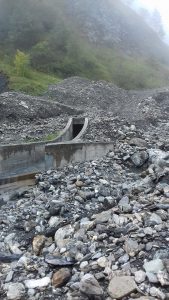 Weisstannen: on the way to Batöni – a lot of large boulders in the river-bed 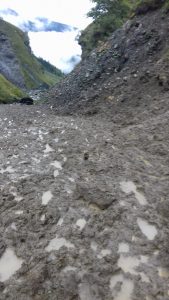 Weisstannen: on the way to Batöni – Welcome in the mud zone…

The two boulders and the three mighty waterfalls in the so-called “Batöni Arena” quite impressed me. At the boulders I wasn’t aware of much energy, but at the waterfalls it was the opposite! What a quiet force is emerging from these cascades of water and how beautiful are the contours of the surrounding mountains… 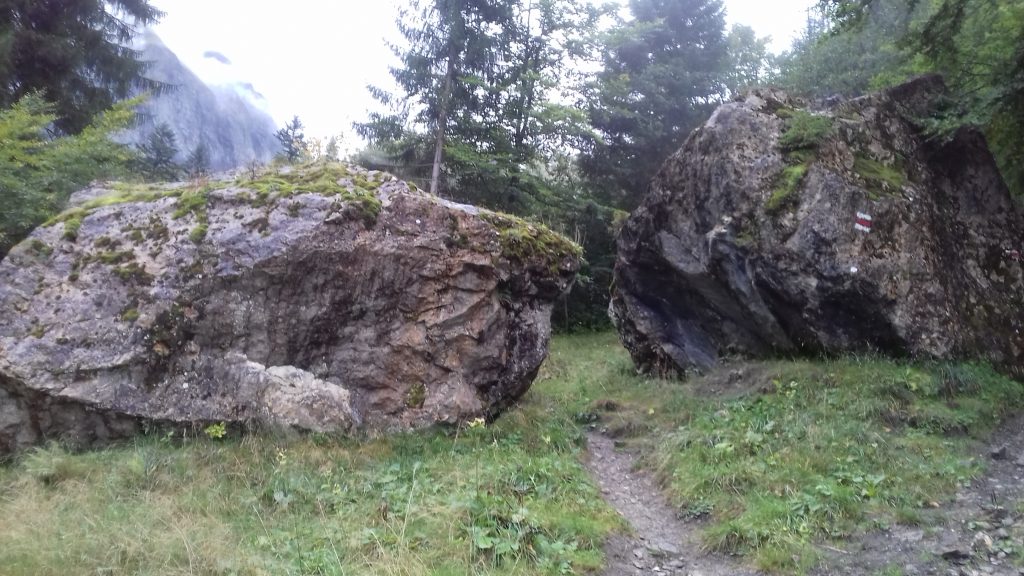 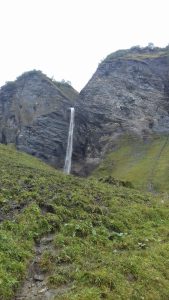 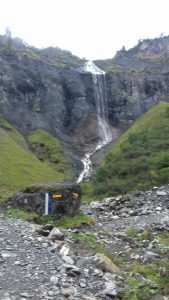 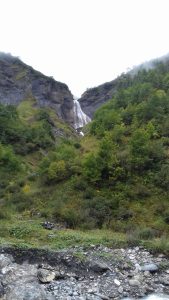 Most of the summer flowers have been spent by now, but I also saw autumn crocuses – a field covered with them near the Unterlavtina Hut. 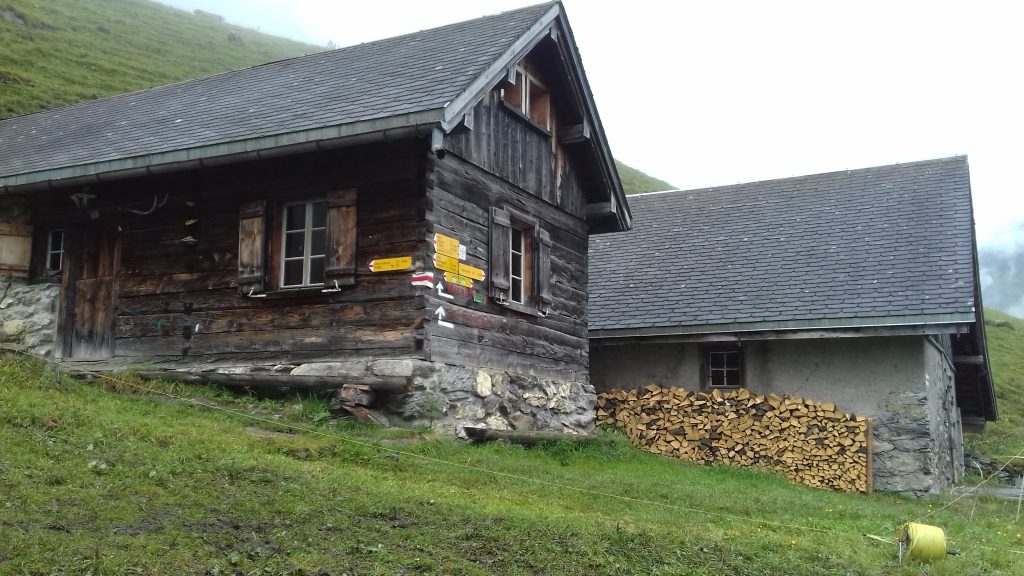 Weisstannen: on the way to Batöni – field with autumn crocuses

Weisstannen: on the way to Batöni – close-up of an autumn crocus

The real magical moment for me however was the sighting of four ibexes! Two of them were a few years older than the two other ones, judging by the number of rings on their horns. I noticed a brownish flash and there I saw them spurting away uphill, taking a break once in a while. It was just the question: who is spying on whom! I was too late for my camera, but just in time for my binoculars. Getting closer to the spot I noticed a track they must have regularly been taking: from the mountain slopes towards the water and back. What a delight… 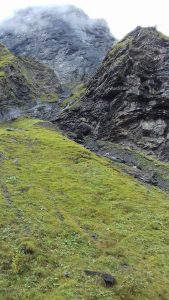 Weisstannen: Here the four ibexes went up the slopes and disappeared

Arriving back in the village the sun was shining abundantly and the temperature was quite pleasant. A visit to the local Museum (“die Alte Post”/”the Old Post office” or also called “Post-ab!“) is really worthwhile. This old building, dating from the 18th century and used as an official post office until the 1950’s, has been renovated some five years ago with a lot of love and dedication. Here not only the history of the Weisstannen Valley is told on the basis of several themes, but in the attic of the building there also is an artistically made and very witty animated show, in which many aspects of this area are presented. 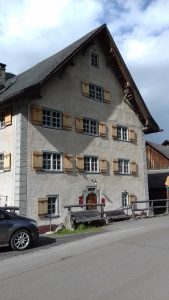 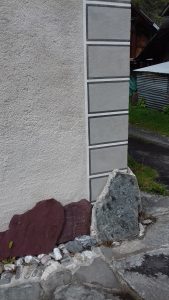 Weisstannen: close-up of the Verrucano stone, regularly used as pavement 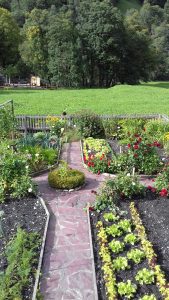 Weisstannen: The vegetable garden in baroque style with Verrucano stone as pavement

Today there has not been a lot of rain, but I certainly noticed how much the soil has been saturated with water. This circumstance has been decisive for my plans for tomorrow… When I arrived at the hotel I told the hoteliers that I planned to hike from Weisstannen to Elm on Monday. The lady said that there would be a lot of snow on the Foo Pass, as its altitude is about 2.200 meters, and her husband added that there would probably also be some fog. With my today’s experience added to their remarks, my decision has been made: it will be a trip to Elm by public transport!

I spent a wonderful time in Weisstannen – although it was quite a contrast to the last time I was here, on that warm day in July. Still I am sure that someday I will return to this definitely magical place!